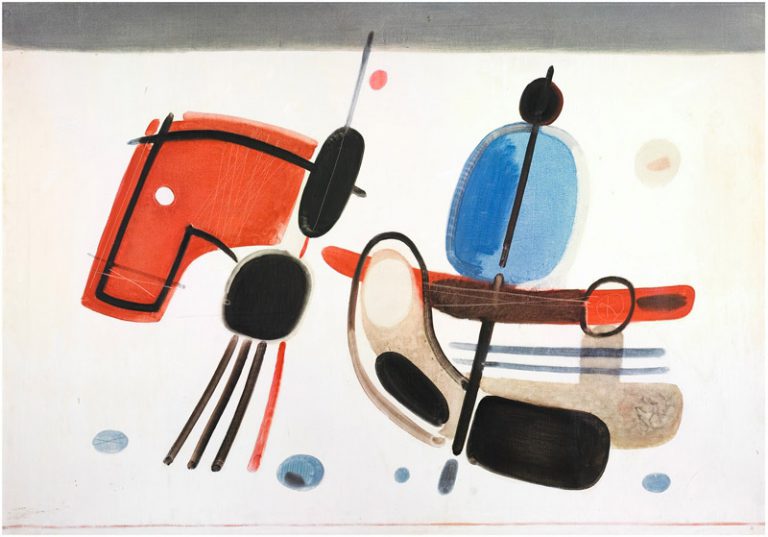 Considered by many to be the Slovak Kandinsky, we would like to present to you the famous Slovak sculptor and painter Vladimír Kompánek who, through the reduction of reality into simple geometric shapes and primary colors, created works that reflected the beauty of Slovak nature immersed in a snow cover, that Kompánek remembers from his childhood memories.

Lady Winter was coming for us to Martin. The horses were running and ringing with her on the roads. She was new, fresh and there were clean tracks on the white surface. She won in our tiles and we fell asleep. She was already waiting for us in the morning and we were chasing her in the most beautiful places. By rivers, streams, mountains, valleys. She went with us from village to village. She was chasing us every day.

Such was the winter in the Rajecká valley, as the sculptor and painter Vladimír Kompánek remembered. He described it in the book Impressions, in which he immortalized his childhood memories. The cottages covered with snow in picturesque paradise villages, squatting under white caps, children chanting in the snow, and colorful carnival processions.

Although his main artistic inspiration comes from the village of Rajec, from 1947 to 1949 Kompánek lived in the capital city of Bratislava where he studied at the Slovak Technical University and later he transferred to the Academy of Fine Arts (still in Bratislava), where he studied until 1954. In 1957 he was a co-founder of the so-called Mikuláš Galanda Group, which played a significant role in the formation of Slovak fine art.

From 1960 he lived alternately in Rajec and in Bratislava, where he created a new studio. After a while, he remained living and creating in Bratislava. In 1972, at the time of the so-called normalization, his membership in the Union of Slovak Fine Artists was not renewed, which meant a “silent” ban on public exhibitions, reproduction and the purchase of his works in public galleries. However, this ban has never been strictly enforced.

As a founding member of the Mikuláš Galanda Group, Vladimír Kompánek remained faithful to his manifesto and to the principles that consisted in the use of the sources of Slovak culture throughout his life. In the early 1950s, he followed a naive expression and created several figural sculptures with modified physical construction and physiognomy.

He worked mainly with bronze and created statues of sitting and standing women, brides, men on horse-drawn sleighs, etc. It was the statues of village women that became the center of his interest in the period 1957–1962 and had obvious Cubist connotations.

In the first half of the 1960s, he discovered geometric stylization and came to reduce the shapes into characters. He first used this procedure mainly in wooden sculptures, later he also applied it in other materials (plaster, bronze). In addition to chamber sculpture, he also created monumental works in the interior and exterior.

In the 1970s and 1980s, he devoted himself more intensively to painted sculpture, to which painting was increasingly added. In the eighties, he created a number of more intimate sculptures and a number of toys, where he successfully connected children’s imagination with a cultural sign.

Everything that surrounded him in his childhood spent in Rajec served as his theme: a feeling of security, carefree, and joy. He soon abstracted the individual components of the image to the level of a sign and shifted the purely geometric sign to the level of a symbol that filled it with archetypal meaning. He opted for rustic forms that, in terms of expression and material, were more in line with traditional folk morphology and reminded him of the “taste of home”.

The basic determining elements are the talismans of our country and the people, so I strive to translate them in the widest possible range of expressions and seek their permanent validity.

In the depiction of cottages, winter idylls with picturesque figures, he sought the essential truth, the bearer of ancient (folk) wisdom, beauty, and goodness. In winter, standardized village views capture picturesque scenes, memories from Rajec, transformed into an idealized form.

Some of his paintings show us the landscape in daylight, others mostly those during the 1980s merge in darkness illuminated only by the moonlight. They are mostly showing a bicolor background made of two opposite colors such as black for the night sky and white for the snow, and they are depicting figures, animals, trees, sleigh, or various working tools typical of the region.

Within his black paintings, and in his work in general, we can also find many traditional masks from various village ceremonies and carnivals such as the so-called “Fašiangy” Carnival. One of these traditional masks is, for example, the so-called “Turoň”. Turoň is a zoomorphic carnival mask with a magic-ceremonial function. The name is derived from a bull called “tur” in Slovak regions (exterminated in Slovakia in the 17th century) and the animal symbolizes strength and fertility. That is the reason why Kompánek often depicts him along with female figures.

Many people and art critics see in Kompánek’s works a resemblance or an inspiration of Wassily Kandinsky‘s abstract paintings, mostly in his various Compositions. The artistic theory of the Russian abstract painter is expressed in his book Point and Line to Plane. There he writes about his theories of musical, mathematical, and philosophical meaning of brushstrokes, vertical and horizontal lines, dots, blank and solid areas, and the overall color palette he uses in his paintings, and these theories are visibly reflected in the Kompanek’s works.

The name of Vladimír Kompánek will forever be associated with the founding and activities of the Mikuláš Galanda Group, with its historical merit in rejecting socialist realism and in restoring the broken continuity of modern expression in Slovak art. Vladimír Kompánek is primarily recognized as a sculptor, but he was also an excellent painter and draftsman.

His art program was based on transforming the traditional motif of the Slovak landscape and the people in it into a modern artistic expression. He created a kind of abstract artistic pattern, based on the reduction of the subject to its shape, resulting in the significance of the shapes. It was in the significance, for the expression of which Kompánek had an extraordinary talent, that he combined figurative theme with expressive abstraction, realism with imagination. Vladimír Kompánek is one of many artists who tend to be undervalued but in his works, we can admire the process of reduction, in which he was able to express difficultly simply.

Johannes Vermeer is both one of the most loved and most mysterious painters in European art. Moderately known during his lifetime, completely...