Between Art and Engineering: Kinetic Beasts by Theo Jansen 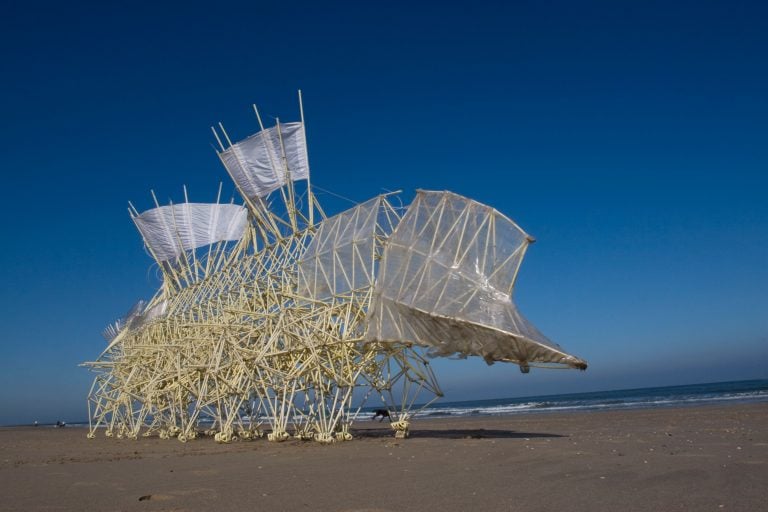 Theo Jansen, a Dutch contemporary artist, a sculptor, an engineer, and most significantly, a visionary. The universe in his mind along with his manual capability came together to create rare and breathtaking kinetic sculptures roaming around the Netherlands’ beaches. Welcome to the Strandbeest jungle of Theo Jansen.

I make skeletons that are able to walk on the wind, so they don’t have to eat. Eventually I want to put these animals out in herds on the beaches, so they will live their own lives.

Who Is Theo Jansen?

Driven by his interest in unconventional technical constructions and the mechanism of evolution, Theo Jansen born in 1948 with a talent for both physics and art, created his fantastic creatures one day and developed as an artist.

In the spirit of Leonardo da Vinci, Theo Jansen once focused his attention to study science and physical phenomena before he shifted to art. After his abandoned studies at the University of Technology at Delft, Jansen became involved in many projects such as The Flying Saucer Machine in 1980 or The Painting Machine in 1984-1986, which involved art and technology. But his most exceptional creations are definitely Strandbeesten.

Theo Jansen and His Strandbeest

Strandbeesten (or Strandbeest in singular) means “beach beasts” in Dutch. Since 1990, Jansen has created large moving kinetic structures that are sometimes wind-propelled and in that way able to move on their own. He entitled them collectively as Strandbeest. These breathtaking creatures traveling over sand resemble walking animals and they are constructed from PVC pipes, wood, fabric airfoils, and zip ties. In fact, materials used for their production are being constantly improved and designed to adapt sand beaches or different types of environments in which Jansen releases them.

Even in the absence of wind, some of Jansen’s animals are so sophisticated that they can store air pressure in order to propel themselves or are able to detect when they are entering the water and moving out of it. He strives to equip his beautiful monsters with their own intelligence to manage to avoid obstacles, by changing their course when one is detected, such as the sea itself. Although the skeletons are clearly recognizable as artificial, they still evoke the organic walking and motor skills of long-legged insects or caterpillars. Basic Strandbeest design uses multiple pairs of these legs set on a central crankshaft, which produces a galloping-herd effect.

The majority of the Jansen’s animals carry Latin titles that often refer to a specific animal (Mulus, 2017), insect (Chalibs, 2018), animal or human body part (Umerus, 2009) or just a Latin noun, adjective or verb (Percipiere Excelsus, 2006). The names’ meanings are connected to each beast’s movement or method of creation.

Jansen also divides his different generations of Strandbeesten into time periods like geologic areas. In the earliest period, he taped tubes together. He calls this the Gluton Period (1990-1991) and the first tube-and-tape creation, Animaris Vulgaris, could not stand up. It could only lie on its back and move its legs. In the next period, the Chorda Epoch (1991-1993), Jansen began to connect the tubes with nylon zip strips and he built Animaris Currens Vulgaris, the first animal that could stand and walk.

Originally they were conceived as a solution to combat rising sea levels due to global warming, but through two decades of experimentation and development, Strandbeest evolved to respond, interact, and adapt to changing environmental conditions. They can store wind power, navigate the shore with the changing tide, or even anchor themselves ahead of oncoming storms.

The artist often claims that he is not sure whether he is a sculptor or an engineer or something between. His Strandbeesten have been in exhibitions all over the world – Munich, London, Taipei, Madrid, Tokyo, Seoul – and for Jansen, it is not important if they are exhibited in art museums or science centers, they have appeared in both.

Over the years Strandbeesten have become popular culture sensations and in 2016 even featured in an episode of The Simpsons called The Nightmare After Krustmas with Theo Jansen as a cartoon character.

Strandbeest are magnificent wind walkers that bring together art, science, and performance. Through his oeuvre, Theo Jansen developed a deep understanding for the principles of life and the evolution of species. Slowly his beach animals came to life, changed, grew up and their elegant movement should be nowadays observed not only by art lovers or science fans but by all of us. We should admire the genius of the artists’ capability to bring to life such beautiful creatures living their own lives in the Netherland coastline.

If you want to learn more about this new and extraordinary animal breed watch the artist himself explaining his projects at the TED Conference which took place in 2011 in his hometown Delft: