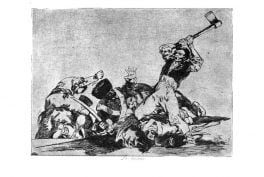 The rediscovery of medieval civilization is one of the most striking French intellectual curiosities of the later 18th century and early 19th century. The discussion of the origins and foundations of the French nation was rising, initiated by historians Jules Michelet or Augustin Thierry. In this context, the Middle Ages took on new importance, especially in art and literature. This “anecdotal genre,” as it is called in the field of painting, took the name of the “Troubadour Style” around 1880. However, it was from the years 1820-1830 that this style became a real fashion.

The Foundations of the Troubadour Style

Fully inscribed in the Romanticism of the 19th century, the Troubadour Style is so named in reference to its first objective, the reconstruction of a medieval atmosphere in various fields such as architecture, painting, and literature. The term “troubadour” describes, in the 12th and 13th centuries, a poet traveling through France from castle to castle to compose ballads. Around 1881, this term is used to qualify, but above all to criticize, the paintings of the 19th century illustrating a Middle Ages which moves away from historical veracity to come closer to the atmosphere of fairy tales. More broadly, this term defines history painting that evokes a non-classical Western past.

If the search for the origins of the French nation led to a renewed interest in the Middle Ages, the Musée des Monuments Français created by Alexandre Lenoir in 1795 played a large part in the advent of this medieval “fashion.” Indeed, the overview of medieval sculpture offered by the museum presents the public with its first lesson in history.

The Troubadour Style in Painting

Fleury Francois Richard, Jean-Auguste-Dominique Ingres, Paul Delaroche, and Pierre Revoil are the major painters who have illustrated this artistic fashion. Generally speaking, so-called “troubadour” pictorial works evoke passionate dramas or edifying and heroic stories. Added to these strong narratives is the presence of typical medieval characters, such as knights or ladies accompanied by their servants. In short, the troubadour painting is at the crossroads of a genre painting—by the interest shown in an anecdote—and great history painting, in its taste for the national past and its erudition.

Fleury Francois Richard, a Troubadour with a Brush

Around 1802, Fleury Francois Richard painted the manifesto of troubadour painting, called Valentine of Milan mourning the death of her husband Louis of Orléans. Inspired by the recumbent figure of Valentine Visconti (1366-1408) exhibited at the Musée des Monuments Français, the painter was struck by the motto which was inscribed there: “Rien ne me plus,” “No longer is anything to me,” in other words, I no longer care about anything. On his canvas, Fleury Richard represents the young woman in tears following the assassination of her husband by the latter’s cousin, Jean Sans Peur (1407).

The painter placed his Valentine in the embrasure of a window, thus introducing a side light which highlights the beautiful blonde figure. Trapped in this window embrasure, as in the fate that has been reserved for her, the young woman stares, lost in space. Dressed in black in 15th century fashion, withdrawn into herself, Valentine of Milan is the embodiment of endless mourning. The austere but refined decor supports this idea. The “frame within the frame,” the peripheral rectangle, is an integral part of the originality of this painting. The diagonal of the green curtain, the color of hope, and that of the consoling greyhound intersect in full light, symbols of a happier future. This pictorial representation of a genre scene mixed with historicism thus signs the birth certificate of the Troubadour Style.

The Emergence of the Figure of Joan of Arc

The 19th century also witnessed the rediscovery of the character of Joan of Arc. After three centuries of relative oblivion, the cult of the young woman was ardently taken over by multiple political parties; while the left sees her as the patriot betrayed by the Church and royalty, the nationalist right sees her as the heroine who drove out the English invader. Joan becomes, following the Revolution, an easy stake for the most contradictory propaganda. The wars of 1815 and 1870 only amplified her aura; she then embodied the hope of French victory, thus spreading, in accordance with the mentality of the century, a strong national feeling. In sculpture or painting, the character of Joan also aroused the interest of certain artists, such as Ingres. Between 1813 and 1819, the latter produced around 30 paintings and drawings which are part of so-called “troubadour” painting. Among them, the famous Joan of Arc at the coronation of Charles VII in which he deliberately marks the opposition between the softness of the face of the young triumphant warrior and the coldness of her armor.

But Ingres is far from the only one who wanted to put a face to the “Pucelle d’Orléans.” Jean-Jacques Scherrer, at the Salon of 1887, presented Joan of Arc, victorious over the English, enters Orléans, currently held by the Musée des Beaux-Arts in Orléans. This monumental oil on canvas presents a late Troubadour Style. Joan of Arc is represented here at the end of 1429, at the time of her entry with the army into the city of Orléans, in the hands of the English for almost a year. A jubilant crowd cheers a combative Joan of Arc, a true warlord, dressed in armor straight out of medieval illuminations. Her white horse, an allegory of Joan’s purity and faith, is draped in a caparison whose blue and red colors, as well as lilies, recall the royalty to which the 19-year-old is devoted.

The typically medieval half-timbered houses, still present in Orléans, reflect the sunrise on the morning of April 29, 1429. Scherrer represented her as she is in collective memory, that is to say masculinized, with a “boyish” cut, her fearless knightly appearance on her pure white horse, represents French royalty. Above all, she is shown as valiant, going straight to victory in the name of her faith.

With this painting, the painter finally presents “his” Joan, from his imagination, while taking into account a certain historical veracity. The painter, in line with the principles dictated by the Troubadour Style, tried to revive a certain aspect of the Middle Ages, embodied here by Joan of Arc, by involving the viewer in the intoxication aroused by the entrance of the heroine in Orléans.

Thus, these two pictorial examples allow us to have an approach to the Troubadour Style. This interest in a bygone era, the Middle Ages, was awakened at the end of the 18th century and became an integral part of the artistic world of the 19th century, immersing viewers in an atmosphere marked by romance, heroism, and religiosity. Finally, inscribing a part of a forgotten past in the contemporary ultimately constitutes the major aim of the troubadour style.