Joan of Arc as Artistic Muse 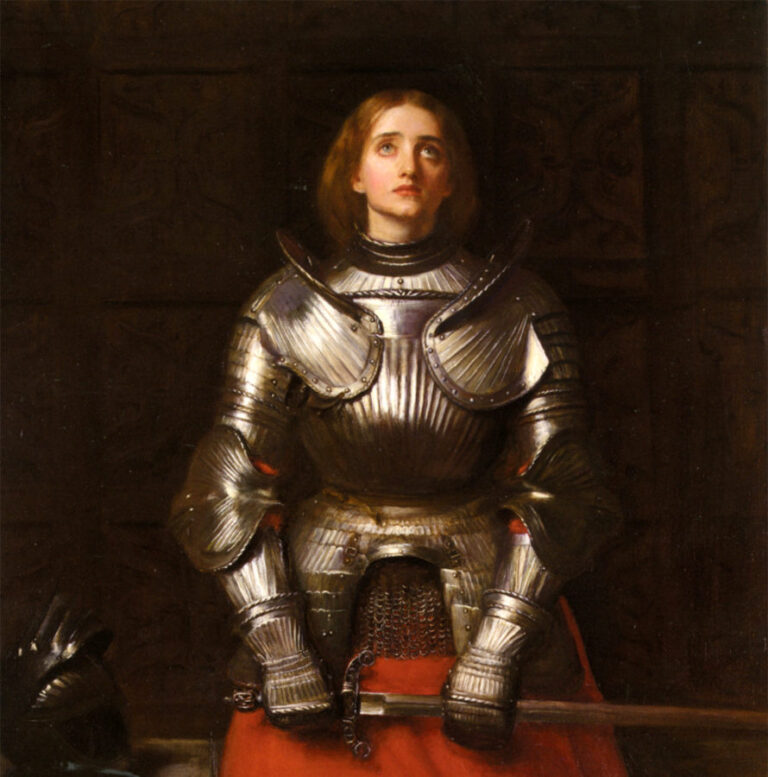 Many historical figures have fascinated our creative mindset: Napoleon, Henry VIII, Elizabeth I, to name a few, but it would appear that a young peasant girl from rural France who gave her life for a cause she believed came from God, has never stopped capturing our attention, making her the ultimate artistic muse.

Throughout Europe, it is astonishing to find statues, paintings, drawings, writings, all inspired by this little Catholic girl: Saint Joan; or as she is more well known, Joan of Arc.  The sheer quantity of imagery, poetry, books and even songs is staggering and the question that all artists seem to ask themselves is why is this young girl so fascinating?

Jeanne d’Arc, to give her French designation, was the daughter of a farmer, Jacques d’Arc, born in Domremy, France around 1412.  An illiterate peasant girl, Jeanne had followed the teachings of the Catholic church from a young age and her piety led her to hear voices that she believed were from God through ‘angels’; namely Saints Michael, Margaret, and Catherine.

Historian, Helen Castor, describes the moment she first heard voices: “On her right side, towards the church, there came a light, and a voice, and she was afraid, but she heard it for the second time, and then a third, and then she understood that it was the voice of an angel, sent to her by God. It told her to be a good girl, and to go to church; then it told her of her mission, even though she was a poor girl who knew nothing of war.”

Standing in her parents’ garden in Domremy, Jeanne, with arm outstretched, listens to her inner voices, depicted in the background as three distinct figures, Saint Michael recognisable in armour being one of them.  The naturalistic effect of this work lends itself to the poverty of Jeanne’s upbringing, making her appear more real, rather than the saintly figure she is often associated with.  Clearly, she was just a girl and this is also reflected in this exquisite statue by Henri-Marc-Antoine Chapu:

In this exquisite marble statue of the maid listening to her voices, Chapu captures the ethereal quality of Jeanne. Hands clasped in her lap, Jeanne listens with a quiet determination to her ‘voices’.

It is this innocent quality of Jeanne that appeals, and not just to artists and poets, but also songwriters.  British synth band, Orchestral Manoeuvres in the Dark produced two songs about Jeanne: Joan of Arc and Maid of Orleans (The Waltz of Joan of Arc) in the 1980s.  In an interview in 2010, songwriter, Andy McCluskey said, “She’s one of these amazing historical characters that, like Robin Hood, has become more of a fantasy. The myth is far removed from what must have been the reality… Every historical and political movement since has put their own spin on her so the more you read, the less you know.”  In ‘Joan of Arc’, the lyrics explore this fascination with the idea that this innocent  was led to her fate:  “Little catholic girl who’s fallen in love, A face on a page, a gift from above, She should’ve known better than to give her heart”

My Lord is the King of Heaven

France was in the midst of the Hundreds Year War, a battle between England and France that was vicious and cruel, and Jeanne witnessed at first hand the monstrous fighting that took place between the two nations.

Aged just 16, Jeanne travelled to Vaucouleurs to put forward her assistance via the local magistrate, Robert de Baudricourt and to seek audience with the Crown Prince to tell him that she would see him crowned at Reims.

JOAN [bobbing a curtsey] Good morning, captain squire. Captain: you are to give me a horse and armor and some soldiers, and send me to the Dauphin. Those are your orders from my Lord.

ROBERT [outraged] Orders from your lord! And who the devil may your lord be? Go back to him, and tell him that I am neither duke nor peer at his orders: I am squire of Baudricourt; and I take no orders except from the king.

JOAN [reassuringly] Yes, squire: that is all right. My Lord is the King of Heaven.

ROBERT. Why, the girl’s mad.

Laughed at, ridiculed and rejected, Jeanne did not give up and the legend of Joan of Arc began at this moment. Bernard Shaw gives his Joan an earthy quality.  She cares not for position, she is determined to obey her voices and to do what is right for her country. Giving way to her demands, de Baudricourt sent the maid to the Crown Prince. Dressed in men’s clothing and armour, wearing her hair as short as a boy’s, Jeanne travelled to Chinon, there to meet with the Crown Prince himself to request an army.

The Maid as Soldier

The young Prince eventually granted her wish, despite being warned against this by his advisors and following a lengthy interrogation.  The way in which Jeanne is portrayed can be compared through two images: this fifteenth century miniature and John Everett Millais’, Joan of Arc from 1865:

In both of the images, three hundred years apart, Jeanne wears the traditional soldier’s’ garb, hair short and face set with determination.  The miniature celebrates her sweeping into battle with her flag flying above her head and the three Saints watching over her.  While she may be attempting to remove elements of her womanhood through the wearing of armour, Millais keeps to the Pre-Raphaelite tradition of femininity with the symbolism of her red skirt. Millais, centres Jeanne in a praying position, clasping her sword, but not as someone submissive before her God, but as one ready to do battle.

Mounted on a white charger, and white armour, Jeanne rode with her army to Orlean and there, following a number of assaults, Jeanne’s army was victorious against the French-Burgundians and it was with great fanfare that she accompanied Charles on his way to Reims, fighting as they went, seemingly invincible.

This view of the maid at the head of the army, charging forward on her white stallion, flying the flag of the Crown Prince is one that many people associate with Jeanne.  This is a typical battle scene with the action pushing forward from right to left; red lances pierce the scene, giving a sense of the violence of warfare and in the bottom left hand corner, we can see the cowering Anglo-Burgundian forces being overwhelmed by the invigorated French army.

Sacrifice – gave her body to the grave

Successful in her claim, instead of being celebrated as a hero, Jeanne found herself arrested, imprisoned and accused of witchcraft.  Her trial would today be described as ‘fixed’ and it her end that defines her and is responsible for the outpouring of creativity that she inspired.

Our final work depicts Jeanne at the moment of her death.  This idealised view is far removed from the real horror of the punishment of being burnt at the stake.  But, in keeping with the idea of Jeanne being the channel through whom God spoke, her innocence and love of God is apparent in the way she looks up towards the heavens.  The dark clouds part to take her spirit and on either side of the stake, the people responsible and those who are watching, have expressions of remorse and of sorrow.  The canvas has a beautiful symmetry about it, with the buildings filling the background space and the people the foreground.

Also focussing on the death of the maid, Leonard Cohen’s 1971 song imagines a dialogue between Jeanne and the flames:

“And who are you?” she sternly spoke
to the one beneath the smoke.
“Why, I’m fire,” he replied,
“And I love your solitude, I love your pride.”

“Then fire, make your body cold,
I’m going to give you mine to hold,”
saying this she climbed inside
to be his one, to be his only bride.

In 1456, the decision of the courts was reversed by the papal court and Jeanne was declared a martyr.

In the epilogue of Bernard Shaw’s play, Joan visits Charles in a dream.  He tells her that the sentence has been overturned and her response demonstrates the strength of feeling for this young girl who became the artistic muse to so many for so long:

In 1909, Jeanne was beatified and finally canonised in 1920.  The myth of Saint Joan was now a reality.