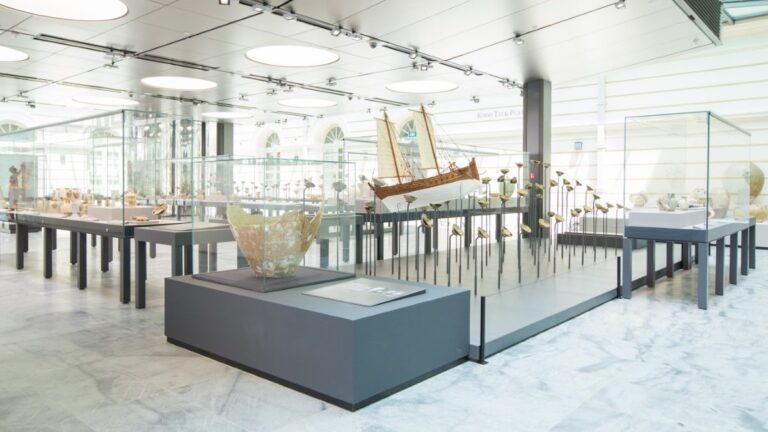 The Eighth Wonder of the World: Terracotta Army

Discovered near the Belitung Island in Indonesia, the Tang Shipwreck is a momentous archeological discovery of recent times that provides significant evidence of commercial relations between the Far East and the Middle East in the 9th century. The shipwreck also confirms long-held speculation about the prominence of sea routes through Southeast Asia in antiquity and revolutionizes our understanding of the ancient globalized world.

During the 9th century, popular items of trade included glass from the Middle East, cotton from India, spices and wood from Southeast Asia and ceramics and silk from China. The sea route likely proved a far more efficient means of transportation than more famous Silk Route as ships were able to convey much more cargo, a lot faster than overland journeys made on the backs of horses and camels.

The wreckage was discovered in 1993 by a group of fishermen diving for sea cucumbers. The Indonesian Government swiftly sanctioned a commercial salvage company to undertake the underwater excavation – a decision that was widely condemned around the world. Archeologists argued that commercial involvement compromised the stringent academic standards for documentation and retrieval. However, assembling an international team is a time-consuming process and the looting of the site had already begun and continued to take place between excavations seasons. The recovery efforts employed by the Indonesian government may have been the only means to prevent the wreckage from being completely lost to plunderers.

Despite the controversy, this shipwreck led to the discovery of an incredibly well-preserved cargo of over 60,000 Chinese ceramics, particularly the famous Changsha bowls as well as other objects from the Tang Dynasty of Chang’an (now Xi’an) bound for the Abbasid Caliphate of modern-day Iraq and Iran.

Origins of the Ship

Though it cannot be conclusively ascertained where the ship was made, an analysis of the remains points to a Middle Eastern design. The wooden planks were sewn together with rope made of coconut husks and no nails or dowels were used in the construction. Scientific reports indicate that the wood came from Africa, repairs were made from materials in India and Southeast Asia, and the cargo came from the Tang dynasty in China – a testament to the ship’s remarkable journey from its inception to its ultimate wreck. It is speculated that the ship may have capsized while making a trade stop in the Sumatra region.

The bulk of the ship’s cargo was ceramic bowls from the kilns of Changsha. The Changsha potters were located in a significant distance from the Tang capital and other major Chinese kilns, giving them the artistic freedom to develop a unique style. These wares are distinctive from other Chinese ceramics due to green and brown pigment glaze and the free-hand designs. The designs on the bowls displayed the potters’ attempt to appeal to an international market. The patterns varied – many were abstract, and others featured birds, floral motifs, and even swastikas (the ancient Hindu symbol of peace).

The Changsha bowls found in the shipwreck were carefully packed inside storage jars cushioned by straw, with about 130 bowls in each jar. Most of the bowls were recovered intact. The sheer volume demonstrates China’s ability to mass-produce nearly identical ceramics in the 9th century. These bowls were highly sought-after, both in China and abroad.

The mere 60-foot-long ship carried an unbelievable quantity of cargo with the ceramics alone weighing about 25 tons. There were several other wares such as bronze mirrors, ewers, and other miscellaneous ceramic items, star anise, etc. Items such as the Chinese silks and other organic cargo were very likely on board but did not survive the centuries underwater.

The opulent Tang dynasty was also known for the production of intricately engraved luxury items of gold and silver. Several such artifacts were found among the wreckage and stood out due to their comparatively high worth. It is unlikely that these belonged to anyone onboard the ship and it is unclear whether they were intended as gifts for foreign emissaries or if they were being smuggled. An immaculately carved octagonal gold wine cup was unearthed in the wreckage – the largest known example of the Tang Dynasty.

In ancient times, the ports of Asian coastal cities were multicultural hubs. Chinese coasts had a sizable population from the Middle East, Southeast Asia, and India. Objects of personal use found in the shipwreck indicate the presence of a multi-ethnic crew aboard. Since such expeditions were undoubtedly perilous, and the crew lived exposed to the elements on deck, it is likely that all of the crew did not survive these sea voyages and new men were regularly recruited from ports along the way. Interestingly, no human remains were found in the wreckage.

The Tang Shipwreck provides a remarkable insight into the interconnectedness of the ancient world and provides the first tangible record of Southeast Asian trade routes in the 800s. It also serves as a reminder of Singapore and Southeast Asia’s long and proud tradition as a cosmopolitan hub where different cultures have intermingled, and artistic ideas have been exchanged for over a thousand years.

The Tang Shipwreck is on display at the Asian Civilisations Museum in Singapore. A heartfelt thanks to the staff at the museum for their time and help, and for sharing some wonderful photographs of their incredible collection.