The Most Beautiful Police Station Entrance: The Giacometti Hall 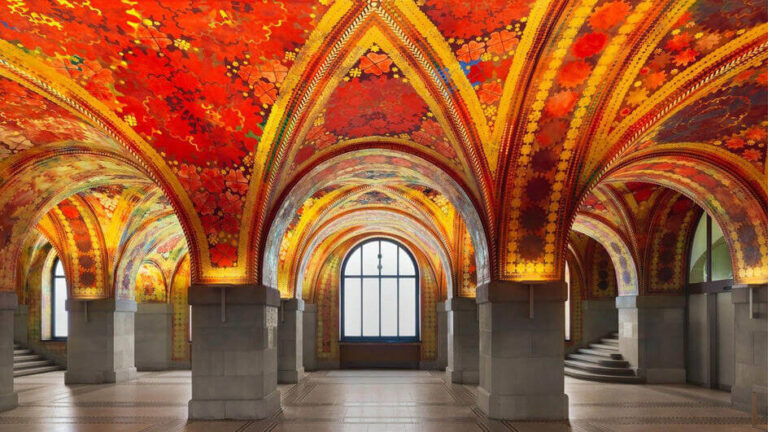 The first thing that might come to mind when you think about a police station is probably not the view you would get when you arrive at Urania Police Station. The entrance hall was painted by Augusto Giacometti in Zurich, Switzerland between 1923 and 1925.

What for some could be an example of Swiss organization and efficiency or just an unpredictable match, for others is a stunning piece of art hidden in the city center. It is physical proof of the importance of using art to enhance architecture.

Even more interesting is the history behind this work. The City of Zurich organized a competition in 1922 to address the issue of darkness in Urania Police Station’s entrance. It was previously an orphanage’s former cellar. The idea was to brighten up the space just by using color.

As this was also a strategy to give work to local artists so the competition was restricted to 6 artists. The winner was Augusto Giacometti (1877-1947), who by then was 45 years old. His winning proposal was an abstract, warm, red, flowery ceiling.

First we should clarify that Augusto Giacometti is not the same person as the famous sculptor and painter Alberto Giacometti (1877-1847). Alberto created incredible pieces like the Dog (1951 [Cast 1957]). By the way, you can also see it in Zurich for free every Wednesday at the Kunsthaus Museum. They do share the same bloodline though. Augusto was the cousin of Alberto’s father, the painter Giovanni (1968-1933). Giovanni was also an artist of the Giacometti Dynasty. This talented family was originally from Stampa, an Italian-speaking village in the middle of the Swiss-alps, in the Kanton (State) of Graubünden.

Augusto created his own color system. According to him it was in order to be able to capture “moods and sounds”. In a radio lecture in 1933, titled “The color and I”, he defended the idea of understanding the macrocosm within the microcosm. He believed “that color must have a life of its own, detached from every object” by the example of observing a simple butterfly. Therefore, if you paint the animal by detaching the wing itself from the object (the butterfly), you would get to an abstract art of tiny color squares. This statement proves it is fair to consider Augusto as an avant-garde artist working in abstract forms.

All of these theories were put into practice in fourteen cupolas and five murals in the Urania Police Station’s foyer and entrance. It was later baptized Giacometti Hall for tourists, and Blüemlihalle (Flower Hall) for locals.

The ornamental, bright, floral ceiling has repeating geometric patterns in all the cupolas. Also on all cross vaults, the ridges are accompanied with white diamonds and ocher leaves.

The motif of the murals on the walls represent the foundation and growing of a prosperous city through the work of its people. Firstly, the reaper and the vintner represent the fertile landscape. Secondly, the handcraft reproduced by the stone carvers, who create living spaces, and the carpenters, who show devotion to their craft. Finally, you will find the intellectual professions, expressed by the astronomer, who explores distant worlds, and by the magician, who researches the laws of nature.

The whole work took two years to complete (which was more than the artist calculated he would need) from 1923 to 1925, with the aid of three assistants. He boldly expected that each person could complete 1m² of painting per day. Due to pressure to meet a deadline, the artist decided to change the technique from Fresco to Secco. As a result the painting is less resistant and durable.

For this reason, the Giacometti Hall has needed to be restored a couple of times, most recently in 2019. The restoration took place next to the normal activities of the Police Station. In total the restoration cost the citizens of Zurich 1.85 million Swiss Francs. Although not too bad it went over budget by 200,000 Swiss Francs from the original estimate of 1.63 million.

If you are in Zurich, do not miss the opportunity of walking (for free!) through this former gloomy cellar of sandstone columns and cross vaults transformed into an interesting and stunning hidden piece of art. You just need to arrive between 9:00 am and 11:00 am or between 2:00 pm and 4:00 pm with a valid photo ID. If you are in a group of more than 10 people advanced registration is required (click here to download the Giacometti Hall official flyer).

Also worth visiting are the important commissions Augusto Giacometti got after this successful work. These include his stained glass windows at Grossmüster (1933) and at Fraumünster (1945), the two most significant churches in Zurich.

If you want to know more about Augusto's nephew Alberto, the most famous of the Giacometti Dynasty, check the exhibition the Guggenheim Museum dedicated to him in 2018 here.

the swiss-brazilian-dutch architect who loves art, lowercase words and justified texts. she uses writing not just to fight against her perfectionism but also as a tool of reinforcement and sharing.