Masterpiece Story: The Kensingtons at Laventie by Eric Kennington 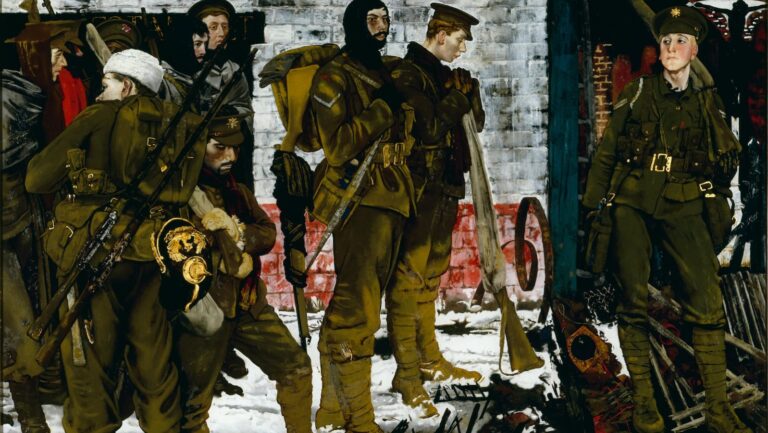 Poppies in Art for the Remembrance Day

The painting The Kensingtons at Laventie, which we present today, is Eric Kennington’s most famous work. It has been described as “one of the iconic images of the First World War”. When it was first exhibited in 1916, the painting had a large impact and hastened the establishment of an official British scheme for war artists.

As today it’s Remembrance Day we feel obliged to feature a painting regarding the First World War.

The Kensingtons at Laventie is a large oil painting on glass by Eric Kennington completed in 1915 that depicts a First World War platoon of British troops. The group depicted was Kennington’s own infantry platoon; Platoon No 7, C Company, the 1/13th (County of London) Battalion, London Regiment (Kensington), which was commonly known as the Kensingtons.

On 6 August 1914 Kennington enlisted with the 1/13th (Kensington) Battalion of the London Regiment, as their recruiting office was the nearest one to his London studio. He fought with his battalion on the Western Front from November 1914, but was wounded in January 1915. One toe of Kennington’s left foot was amputated, and he was fortunate not to lose a foot due to an infection. He spent four months in hospital in London and Liverpool before being discharged as unfit for further service in June 1915. After his convalescence, he spent six months painting The Kensingtons at Laventie.

During his few months of active service before he was wounded, Kennington’s unit suffered 127 casualties, approximately 20 percent of its original strength; by the time he completed the painting, 90 percent of the 700 soldiers who arrived in France with the battalion in late 1914 had been killed or wounded.

The Kensingtons spent the extremely cold winter of 1914 in the front-line trenches in the Pas-de-Calais in France. Their trenches were poorly built and frequently under artillery fire. The painting depicts a moment when the platoon, having spent four days and nights in a forward fire trench, have made their way through a flooded communications trench to the ruined village of Laventie. The men are waiting for the order to ‘fall in’ for the 5 miles march to an overnight billet outside of shelling range

The painting was first exhibited at Goupil Gallery on Regent Street from April to July 1916. The exhausted soldiers caused a sensation. The painting was widely praised for its technical virtuosity, iconic color scheme, and its “stately presentation of human endurance”. Kennington himself was appointed a war artist and returned to France in 1917.

Forest Lane near Schärfling by Emil Jakob Schindler is a masterpiece of Austrian Impressionism. It is an enchanting place where natural wilderness...

The Muisca Raft is a masterpiece of Pre-Columbian art. It was created by the Muisca people who lived in a region of today’s Colombia. Muisca...