The Best of North Carolina Museum of Art: Staff Picks 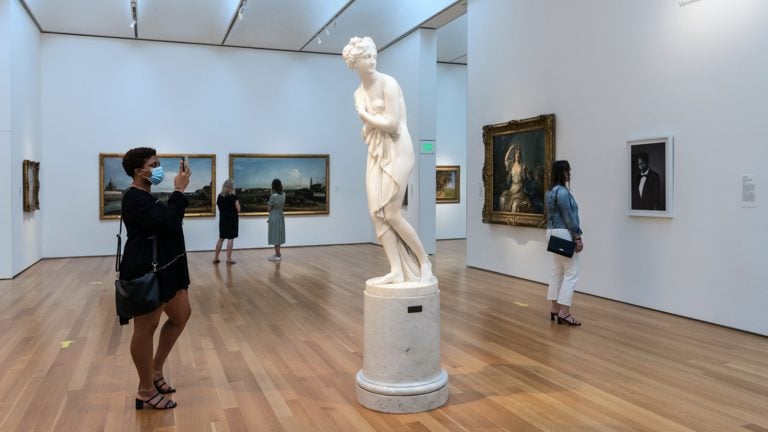 North Carolina Museum of Art (NCMA) is an art museum in Raleigh, North Carolina, housing a collection of works from antiquity to the present. Its main mission is to generate interest in creating an art museum for the state. We had a unique chance to ask a few members of the NCMA staff about their favorite picks from the collection!

Favorite of Angela Lombardi | Director of Outreach and Audience Engagement

Obviously impossible question, but: the piece in the collection that intrigues me the most has to be the Bertoia’s Sounding Sculpture. This “sonambient” piece of artwork stands silent all the time but is made of tall beryllium copper rods that are meant to be gently pulled together, then released, creating their own music – kind of like church bells, from the videos I’ve seen of his sculptures being played. I love thinking about this artwork that we obviously do not touch but which always holds resonant sound inside itself, waiting to be released. I dream of a performance one day – everyone in the space closing their eyes and experiencing the other dimension of this artwork.

The Seine at Giverny, Morning Mists by Claude Monet

When I am feeling unmotivated at work, I like to go look at Claude Monet’s The Seine at Giverny, Morning Mists, 1897, and look at the brush strokes up close and imagine Monet painting them.

A Vase of Flowers on a Table by Bartolomé Pérez

Favorite of Kat Harding | Assistant Director of Marketing and Communications

It’s nearly impossible to pick, but I really love still life paintings, especially with flowers. I’m partial to our A Vase of Flowers on a Table, by Bartolomé Pérez, circa 1660-1670. There is so much hidden symbolism and meaning in still life paintings, and of course, they’re beautiful to look at.

Favorite of Laura Finan | Director of Stewardship and Special Initiatives

My favorite work of art is Michael Richards’ Tar Baby vs. St. Sebastian. When I first moved to North Carolina, a transplant from NY, my birthday gift to myself was a day at the NCMA. As I wandered happily through the galleries, I saw the sculpture across the room and was immediately drawn to it. The symbolism of the airplanes piercing the suit of the young airman was an obvious metaphor to how war can pierce a soul, his African American features a glorious rendition of young heroes often overlooked and underappreciated. It became personal when I read the wall label and found that the artist himself had died in his studio during the attack on the World Trade Center, an event that was a particular catalyst in my life and my decision to leave NY. I felt a full-circle moment that he could not have known when he cast it, a vibration in my heart that only true art can bring. It was life affirming for me, and I took it as the sign I was seeking, to change careers and live the one life I’ve been given to its fullest potential. I’ve been on the NCMA staff for 10 years now, and I will be forever grateful to this artist I’ve never met, but whose work has impacted me so.

Favorite of Karlie Marlowe | Director of Marketing and Communications

I love Hank Willis Thomas’ Ernest and Ruth in our 164-acre Museum Park. Shaped like cartoon speech bubbles, these sculptures offer visitors a place to sit and interact with the works of art and with each other. They’re a very “Instagrammable” moment, for sure, but they also make you think about the importance of language and the concepts of both taking and making space.

My favorite work of art is the Jacob Lawrence painting called Forward (1967). It speaks to me. I realize that I am experiencing a life born on the sacrifices and prayers of African Americans like my North Carolina ancestors. The painting reminds me that I come from generations of African Americans who dared not only to free themselves but to (as Toni Morrison said) “claim ownership” of being a “freed self.” Every day—whether through my role as director of performing arts and film at the NCMA, as part of a Broadway producing team, as an arts advocate in Raleigh, or in my most important role as a father—I make every effort to claim ownership of my freed self. Every day I endeavor to walk in my genius and to make my ancestors proud. Freedom is essential to doing both.

My favorite is Allegorical Portrait of an Artist in Her Studio by Michiel van Musscher. While most people have never heard of this artist, this painting is everything I love about Dutch art: it’s full of detail, enthralling to look at, always has something new to discover, and it’s just a little bit weird. It was acquired by the museum in 1952 as a self-portrait by the Dutch still life painter Rachel Ruysch, and now we don’t know who the artist represented here is (if she even was a real person), but this joyous work celebrates the success of a female painter in an elaborate way, and I love that. Plus, it’s got a dog barking at monkeys, what more could you want?

Nicole works as the Assistant Editor in the DailyArt Magazine and has MA degree in art history. She is passionate about 17th century Dutch art and colonial history. Her life-goal is to work with art and experience its beauty on a daily basis.