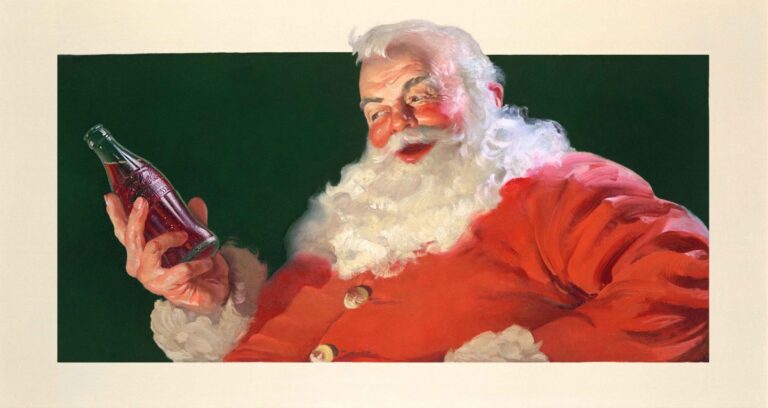 Haddon Sundblom, Somebody Knew I Was Coming…, 1940, World of Coca-Cola, Atlanta, GA, USA.

The Man, The Myth, The Legend: Thomas Nast’s Santa Claus

Various illustrated depictions of the old St. Nicholas, or Bishop of Myra, have existed for centuries, bringing to life his story. Yet, in the end, only one picture spread across different cultures to fix the image of the holiday icon we know and love. This image was shaped by the artist Haddon Sundblom and made popular by a beverage brand we all know too well. Join us for a journey through the story of the most-known portraits of Santa Claus and of the man who painted Christmas.

Coca-Cola started using the image of Santa Claus in their advertisements in the 1920s, but in the earliest illustrations Santa looks severe and rigid, and even wearing the classic red suit and sporting a beard, he is missing the warmth and the magic holiday spark.

The job of creating a symbolic but realistic representation of Santa was commissioned to the illustrator Haddon Sundblom (1899-1976). Inspired by Clement Clark Moore’s poem A Visit From St. Nicholas, the artist portrayed a man with twinkling eyes, rosy cheeks, and a round belly who played with the toys he delivered and embraced the children that stayed up late waiting for him.

One of the illustrators who preceded Sundblom was Norman Rockwell, who in spite of his magnificent drawings, wasn’t able to consolidate the Christmas icon as we know it today.

Sundblom’s Santa was very different from the other ones: he radiated warmth and reminded people of their favorite grandfather—a friendly man who loved children and enjoyed life. And to create this human image of Santa, Sundblom used a friend of his—and later even his own self—as the model for the character. Adding a white beard flowing down over a long red coat generously outlined with fur, an enormous brass buckle fastening a broad leather belt, and large floppy boots, he painted a perfectly lovable patron saint of the season.

This version of Santa Claus made his debut in 1931 and was an instant hit for Coca-Cola and a glimpse of hope and joy for the people whose spirits had been lowered by the Great Depression.

Sundblom continued to create his Santa illustrations for the brand until producing his final version in 1964, and for decades afterwards Sundblom’s Santa could still be seen on advertisements and commercials. With time, it became universally considered as the official personification of the patron of Christmas.

It is also important to say that although today Haddon Sundblom is best known for his illustrations of Santa Claus, during his career he painted hundreds of pin-up pictures, being credited as one of most influential pin-up artists of the 20th century. He also was a mentor to such illustrators as Gil Elvgren, Andrew Loomis, and others.

This artwork is the perfect example of the artist’s ability to capture emotions in gestures and physiology, to use daily scenes to speak about a complex concept or idea, and to demonstrate how a medium like illustration can make people dream.