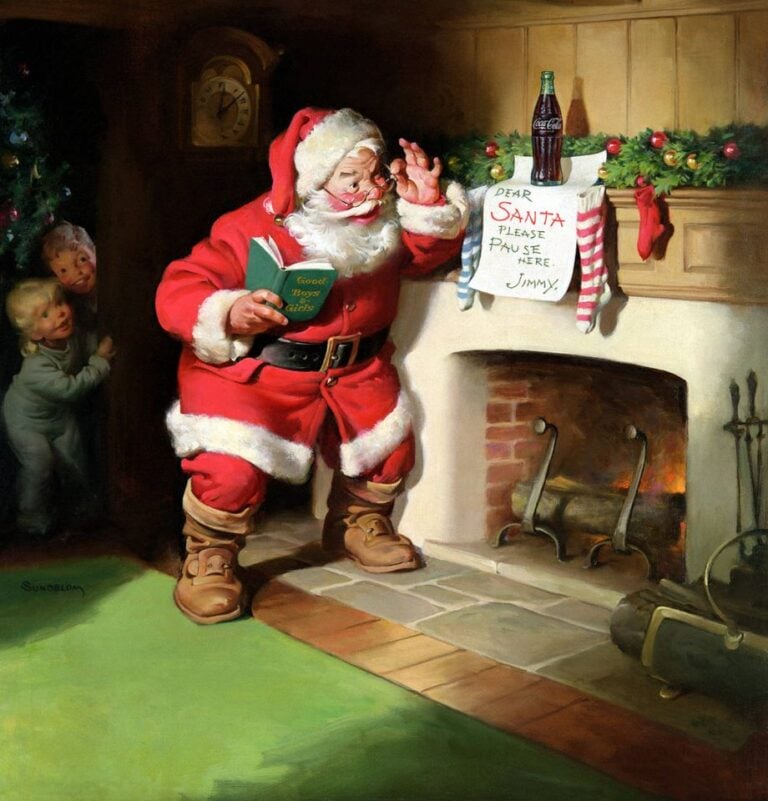 Today is Saint Nicholas Day, a holiday children across the world love because they get little treats if they are good (look up the Dutch version of this holiday!). It’s like a prelude to Christmas, for which we still need to wait three weeks. On this occasion, I want to show you vintage posters demonstrating how Coca-Cola’s Christmas ads have shaped our image of Santa Claus as a jolly old man with a white fluffy beard and a wide smile.

No white beard, no red hat, no belly—this is what St Nicholas looked like before his radical makeover. However, this stern man–looking like any other saint— would not have conquered children’s hearts, so Coca-Cola needed to upgrade his look to…

The Santa We Know

In 1931, the company commissioned the illustrator Haddon Sundblom to develop advertising posters, based on previous images of Santa Claus, for  magazine advertisements. Sundblom’s Santa debuted in 1931 in The Saturday Evening Post  and appeared also in Ladies Home Journal, National Geographic, and The New Yorker. He was inspired by a 1822 poem “A Visit From St. Nicholas” (commonly called “‘Twas the Night Before Christmas”) by Clement Clark Moore. Moore’s description led to an image of a friendly, pleasantly plump, human saint.

Sundblom painted the image of Santa using his friend Lou Prentiss, a retired salesman, as a model. Yet when Prentiss passed away, Sundblom used himself looking in the mirror. The children who appear with Santa were based on Sundblom’s neighbors, two little girls; he changed one of them to a boy.

People got very attached to Coca-Cola images, and if anything changed, they sent letters to the Coca-Cola Company with complains. One year, Santa’s large belt was backwards, perhaps because of Sundblom’s use of  a mirror, while  another year, Santa Claus appeared without a wedding ring, causing fans to write asking what happened to Mrs. Claus.

From 1931 to 1964, the advertising showed Santa visiting children to deliver toys, reading children’s letters and, of course, enjoying a glass of Coke. Sundblom painted Santa as original oil paintings, which later were adapted for advertising in magazines and on store displays, billboards, posters, calendars and even plush dolls. Most of the originals are now at the Coca-Cola Archives in Atlanta, loaned for exhibitions.

Happy St Nick’s Day! I hope you’ve all been good and you’ll get a candy today!