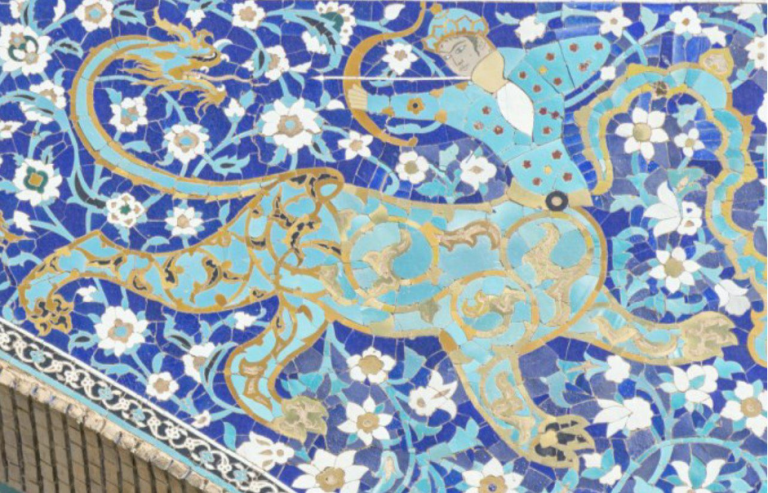 The Qaysariya bazaar is located in the north of Naqsh-Jahan square of Isfahan. It was founded by Shah Abbas in the Safavid period. On the tile spandrels of the gate of this bazaar, we see the symbol of Sagittarius in the form of an archer. The depiction of the Qaysariya gate has origins in the history of Isfahan and Persian mythology. Read more about the image of Sagittarius on Qaysariya gate.

The Sagittarius is shooting at a dragon’s tail. A study of the evolution of the symbol indicates that the tile panel was designed according to a map of the Sagittarius constellation taken from the Book of Natives. This was a book of astronomy. The depiction of the Qaysariya gate has origins in the history of Isfahan and Persian mythology. In addition, the dot pattern of the costumes of the Archer indicates the stars of Sagittarius, Leo, and Libra constellations.

The History of Glazed Objects Tiles in Iran

The history of polychrome glazed objects in Iran dates back to the Elamite period (second millennium BCE). The same technique was also used in the Palaces of Susa and Persepolis in the Achaemenid era. During the Islamic period, polychrome glazes were widely used in the pottery and ceramic industries. In fact, throughout the Safavid period, the production of colorful tiles reached unprecedented heights. Geometric patterns, flowers, and arabesques were particularly popular. They were most often made for the ornamentation of mosques and palaces. In this article, we focus on a Safavid tile panel on the spandrels of the gate of the Qaysariya bazaar of Isfahan. This tile panel is also proposed as the symbol of Isfahan.

The Qaysariya Bazaar of Isfahan

Qaysariya is one of the oldest bazaars in Iran. It is located in the north of Naqsh-Jahan square. The tile panel we refer to was created by joining a lot of cut tiles to produce its figures. The inclusion of the symbol of Sagittarius indicates that the battlements of Isfahan were founded in the Delylami period when the sun was located in the Sagittarius constellation. In fact, it was the astronomers who suggested that the battlements should be constructed at this time.

Depiction of the Sagittarius at Historical Monuments

Jean Chardin, a French jeweler, and traveler depicted the gate of the Qaysariya bazaar in his book. Significantly, he noted that the symbol of Sagittarius could be found in several places. One version is on the wall of Tabarak castle of Isfahan. Another is on the walls of Ali Gholi Agha’s bathhouse of Isfahan and the Ganjali-Khan bathhouse of Kerman. The symbol is also seen on a pair of lacquer-painted doors. This dates back to the Safavid period. Furthermore, Portland and Frankfurt museums store two tile panels, which are very similar to the tile panel of the Qayṣariya gate.

The Symbol of Sagittarius in the Ancient World

Humans conceived of the universe as a number of circles. When they drew lines between the stars in the sky, they created 48 shapes of mythical creatures called constellations. These days we give special attention to the 12 constellations that occupy the ecliptic in the sky. These are Aries, Taurus, Gemini, Cancer, Leo, Virgin, Libra (Scales), Scorpion, Sagittarius, Capricorn, Aquarius, and Pisces.

The Sun stays in each section for 30 degrees (one month). This is the basis of the solar calendar. Sagittarius (the Archer) is the ninth astrological sign. We learn that the earliest pictures of Sagittarius, as a horse-centaur armed with a bow, were discovered in ancient Egypt. The same symbol also appears in the ancient mosaics of Bursa, Turkey. Sagittarius was a simplified version of the Babylonian Pabilsagh. Pabilsagh was a mythical creature with a Scorpion’s tail, a number of wings, and the head of a dog. He is identified with the god Ninurta who drove souls into the afterlife.

The Symbol of Sagittarius in the Islamic Period

We see Sagittarius and other zodiac images on the vaulted ceiling of Qusayr Amra. Together they are the first examples of astronomical signs in the Islamic period. However, many museums hold metal works, potteries, and tiles with zodiac images in their stores. One such is this basin from the Metropolitan Museum of Art.

The next figures show forward and backward-looking Archers. The most significant are those taken from the Book of Fixed Stars by Al-Sufi. Note how the head of a dragon replaces the scorpion’s tail. One image includes a constellation mapping. This has been taken from a manuscript of the Book of Natives. The author of this book was Abu Ma’shar al-Balkhi and it dates back to the 15th century. Here we find Sagittarius shown as an Archer shooting at the dragon’s head. This picture was also drawn on the spandrels of the Qaysariya gate of Isfahan in the Safavid period.

The Lion in Persian Mythology

The lion which appears in the symbol of Sagittarius plays a large part in the mythology of different cultures. The animal is generally acknowledged as a symbol of power. It is included here to represent the Leo constellation. Similarly, several sphinxes in Persepolis have the same importance in ancient Persia. The figure of the Sun, originally in the middle of the spandrels, was cleared in the restoration processes. The presence of the Sun and lion in this tile panel specifically indicates that the Qaysariya bazaar was founded by a king (Shah Abbas).

The Dragon in Persian Mythology

The dragon is another mythical creature. The head of a dragon sometimes replaces the scorpion’s tail in the astronomical mappings of Sagittarius. The explanation for this lies in Persian mythology. The key book is Bundahishn, a Zoroastrian encyclopedia of astronomy. Each constellation in the ecliptic refers to the kingdom of a Persian king. In this instance, the reference is to the kingdom of Feredun. Feredun defeated Zahhak, a king in Ancient Persia who was referred to as a dragon in the book of kings (Shahnameh). Kavi, a native of Isfahan, helped Feredun in battle by rebelling against Zahhak.

Depiction of the Archer in the Tile Panel

Here we see the Archer as a prince wearing a turquoise costume. The color turquoise was very popular in tile works of Isfahan domes. The backward-looking Archer resembles Parthian Archer in ancient Persia. His costume is very similar to that seen in the paintings of Chehel-Sotun Palace. However, his hat resembles those seen in the paintings of the book of Shahnameh of Shah-Tahmasp. We can see jewels in his armlet and belt. Once again, the Archer’s costumes, belts, and armlets are decorated with twenty-seven colorful dots. This dot pattern is referred to as the stars of constellations.

The Relation of the Constellations and Dot Pattern of the Archer

When the Sun was located in this constellation, the ancient Persians held the festival of Mehregan. This was an initiation ceremony dating from the reign of Feredun. We learn that the reign of Shah Abbas started on 1 October 1588 when the Sun was located in the Libra constellation. The depiction of the Libra constellation on the tile panel is said to refer to the Mehregan festival held when Shah Abbas’ reign began.  We also see many colorful dots included in the costumes of the Archer. These take the form of two cross patterns, one of the oldest patterns in art history. The standard of Kavi bears the same pattern. In addition, the twenty-seven dots in this pattern point to the number of stars of the Leo constellation.

The Arabesques on the Background of Tiles Panel

This tile panel also includes a number of arabesques and flowers. Arabesques are curved lines that combine with intertwining elements such as flowers and leaves thus creating abstract forms. We see decorative arabesque patterns on the tiles of mosques, schools, and other buildings from the Islamic period. A tile panel installed on spandrels of the gate of Atiq (Jame) mosque of Isfahan in the Qajar era also includes arabesques. The eight star-shaped dots distributed in this same panel represent the eight bright stars of the Sagittarius constellation. Therefore, the tile panel is a representation of the Sagittarius constellation.

Al-Biruni, Book of Instructions in the Elements of the Art of Astrology, translated by Wright, Ramsay, London: Astrology Center of America, 2006.