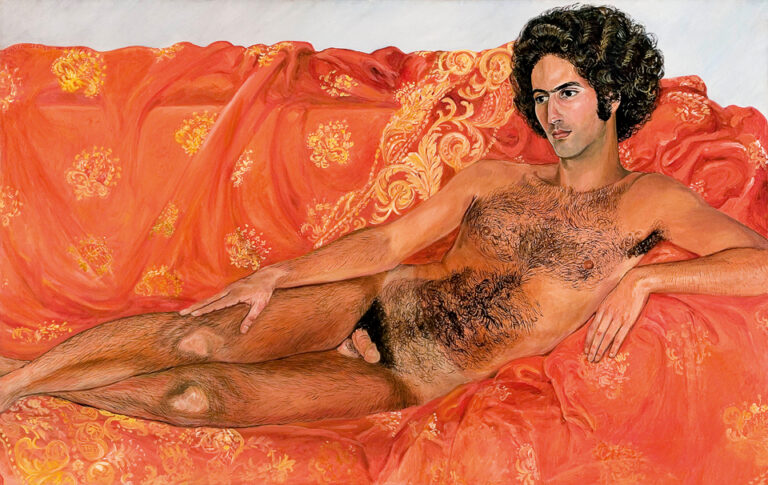 I called Sylvia Sleigh a slay girl because she was beautiful inside out. Brave and independent, she pursued her own figurative style which by many was regarded as outmoded in the years of Pop Art dominance. She was a woman painter who painted male nudes in the United States, a country which in the 1970s had a lot of prudishness hanging about. Then, she was also an active feminist who in 1972 cofounded A.I.R. Gallery, which was a gallery run for women by women, where they were given space and attention to present their work professionally. 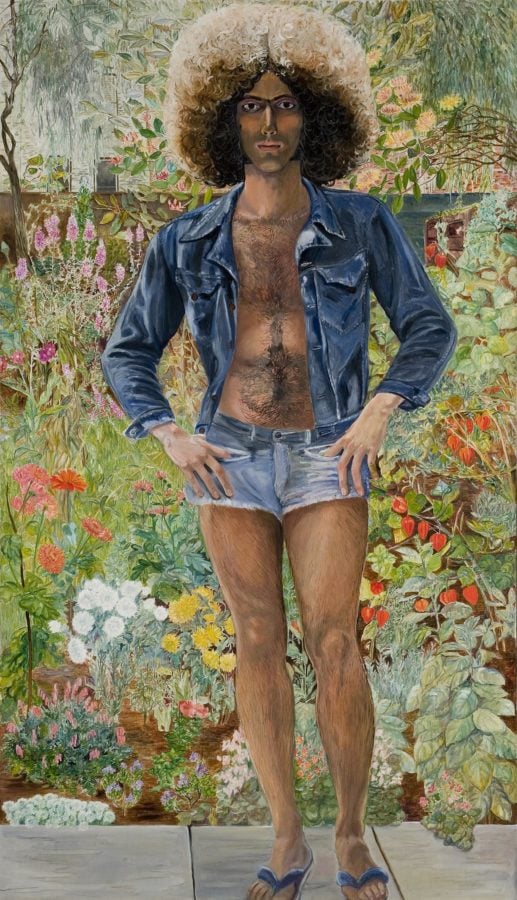 Sylvia Sleigh, Annunciation: Paul Rosano, 1975, © Estate of Sylvia Sleigh[/caption] Although she was born in Wales in 1916, she spent most of her life in the United States where she moved with her second husband, Lawrence Alloway, a curator and art critic who is known to have coined the term “Pop Art.” They met at the University of London where Sleigh was taking evening classes. First she studied painting at Brighton School of Art and then nursing, before turning to a full time painting in the late 1940s. After her transfer to the US in 1961, she quickly became entrenched in New York’s bohemian intelligentsia since Alloway started work at the Guggenheim as a senior curator the same year.

Who is Paul Rosano? 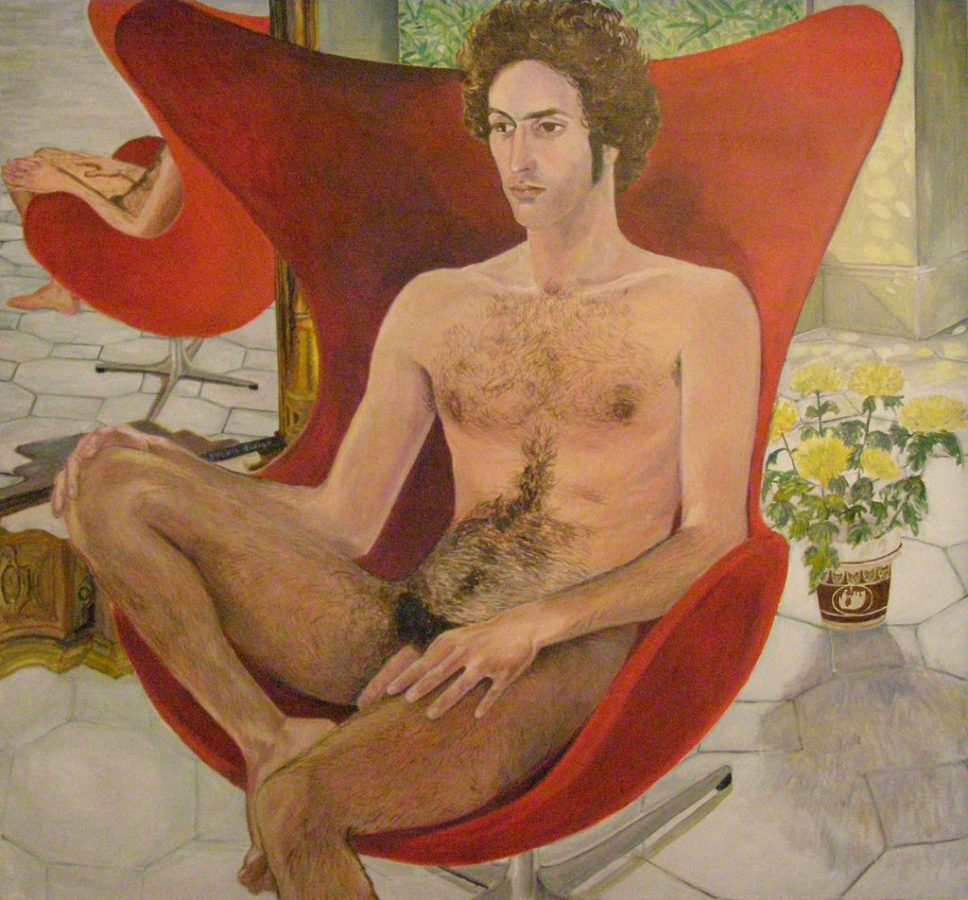 Sylvia Sleigh, Paul Rosano in Jacobsen Chair, 1974 , mumok, Vienna[/caption]
One can say more about the chair, which appears in a large number of her portraits and self-portraits, than about this lean curly-haired man who seems to be her favourite model and about whom we know basically nothing. The red “egg chairs” were designed by Danish designer Arne Jacobsen in 1958 especially for the Radisson SAS hotel in Copenhagen and were manufactured by Republic of Fritz Hansen. Jacobsen had been given an opportunity to design every single element of the hotel and the chairs intended for the lobby and reception areas complimented the interior with a perfect juxtaposition making with their ovoid shapes a sculptural contrast to the hotel’s almost exclusively vertical and horizontal surfaces.

“I wanted to paint men in a way that I appreciated them, as dignified and intelligent and nice people.” 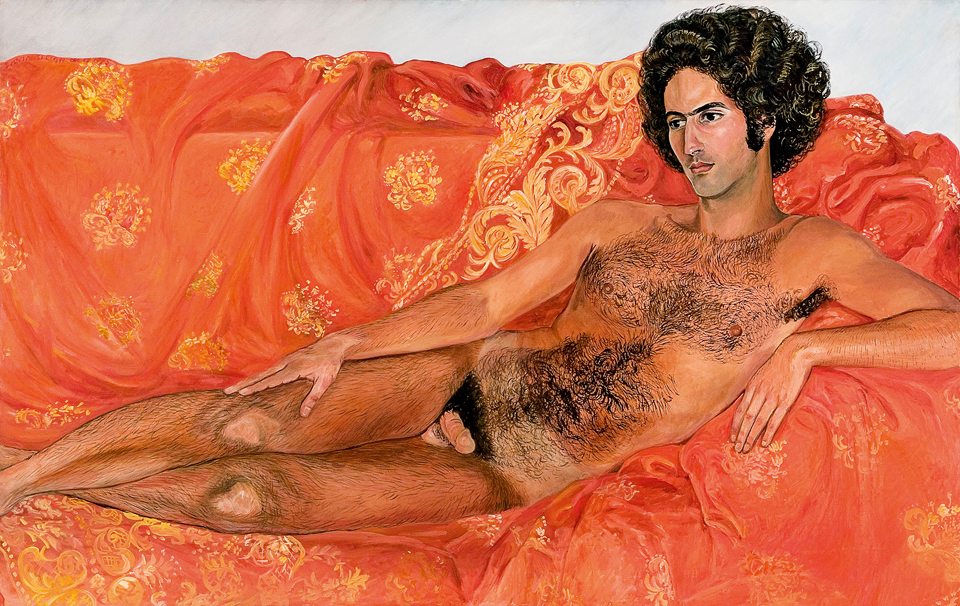 Sylvia Sleigh, Imperial Nude, 1977. Courtesy of and © Estate of Sylvia Sleigh[/caption] In 1974 Sleigh painted a series of male and female nudes citing from the past masters (who all happened to be male) such as Titian, Giorgione, Ingres, and Manet. Thus she created gender-reversed versions of classic works from art history because not only it was men who were the models, but this time it was a woman who did the painting. Moreover, as she explained, she did not intend to reduce her sitters, whether male or female, to a role of a sexualized muse subjected to the voyeuristic gaze of the artist and subsequently of the viewer. Sleigh said: "To me, women were often portrayed as sex objects in humiliating poses. I wanted to give my perspective. I liked to portray both man and woman as intelligent and thoughtful people with dignity and humanism that emphasized love and joy." And we can feel this egalitarian treatment in her portraits, her models seem comfortable and relaxed, and the paintings are not charged with traditional stereotypes in which the naked person is presented as sexually available. She found this inversion of roles necessary because, as she explained, “women had often been painted as objects of desire in humiliating poses. I don’t mind the ‘desire’ part, it’s the ‘object’ that’s not very nice.”
[caption id="attachment_20079" align="aligncenter" width="631"] 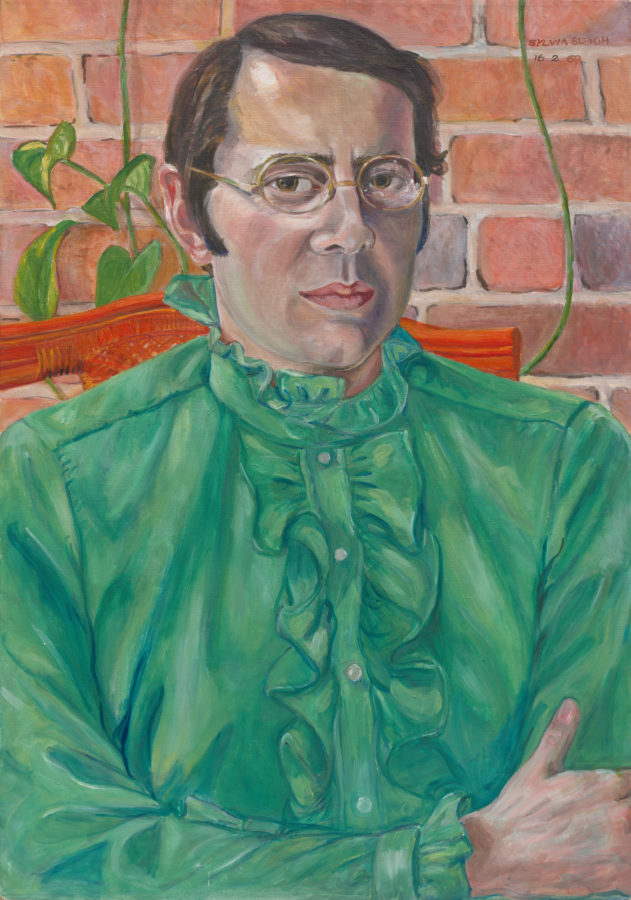 Sylvia Sleigh, David Bourdon, 1969, Museum of Modern Art, New York[/caption] Cornelia 'Connie' Butler, an American curator described Sleigh's style as realist but not a typical one. “I think her painting style is where the work is quite radical. It’s a very raw realism that she was using, and there is something quite rough at how those bodies are painted that tries to get at something a bit more essential about sexuality and nakedness.” Indeed, her approach to her portraits is extremely personal, infused with her own life philosophy and emotional bonds that she had with her sitters. [caption id="attachment_20080" align="alignnone" width="1000"]