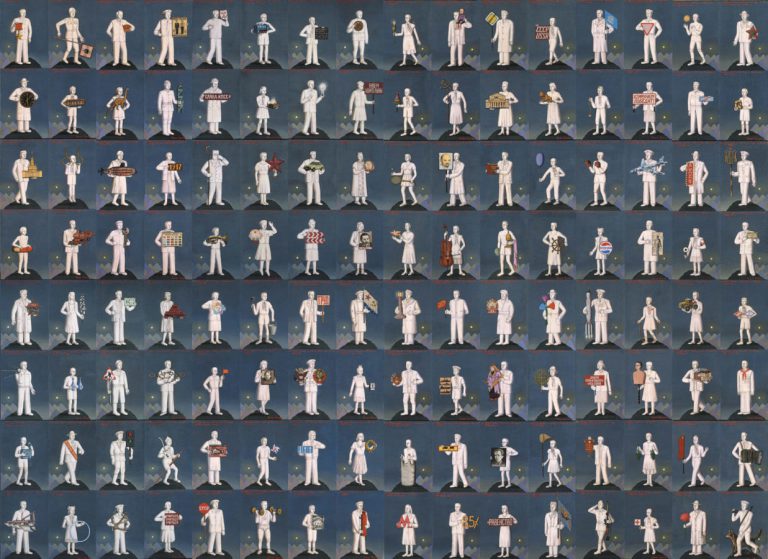 Perestroika and reforms of Mikhail Gorbachev affected all spheres of life in Russia. As a result, unofficial artists in Moscow felt the full influence of this complicated yet rewarding period. A colossal number of artists, previously recognized only in a narrow circle, emerged from the underground. Sotheby’s auction in Moscow in 1988 became the landmark of this process. This event was a clear example of publicity. If not for it, perhaps these unofficial Moscow artists would never have gotten out of their isolation.

The auction took place on July 7, 1988. The official name was Russian Avant-Garde and Contemporary Soviet Art. It was supposed to become one of the most brilliant auctions in history, which is why everyone important was going to be there. Consequently, the auction house organized a very expensive tour which included diplomatic receptions and private viewings. Moreover, there was even a presentation of Russian icons, which had never been on a display for the foreigners before.

Did anyone even understand the unofficial Moscow artists?

A very mixed audience came to the auction. There were people with loud titles, regulars of the Bayreuth and Salzburg festivals, and art dealers. From the Soviet crowd came people with a certain power so they felt free among foreigners. Mainly these were people from various ministries.

“On my second Moscow evening I sat at a table with a member of a certain Middle Eastern royal family, a manager of the world-famous rock star, a divorced countess, a former baseball player and ten others.”

People who knew nothing about the artists came there. They only had the passion to buy something unusual. Only a few people were eager to try to actually understand the Soviet unofficial art.

Before the auction, a group of foreigners visited a workshop of Vadim Zakharov. There, the artist described his system of color shades, how they can denote words, words – images, and images – intonation. After the soliloquy, he heard an unusual question: “tell me, are you using only black, white and gray because it is difficult to get color paints in your country?” Talk about the artist’s design!

Artists who came to the auction initially felt at ease among the titled Westerners. However, after they began to sign catalogs, celebrities woke up in them. Therefore, we can consider this auction as a turning point. That is to say, something switched in the minds of the artists.

The painting Fundamental Lexicon by Grisha Bruskin was sold for the largest sum at the auction. It was bought for 220 thousand pounds, with an expected price of only 17 thousand. 124 figures with emblems are depicted on the canvas. All of them are historical allegories: someone carries a portrait of Lenin, someone uses an airplane, an advertisement for Pepsi-Cola, medals, a wooden house, a rocket … The man who bought it took with him a reduced pocket version of perestroika. However, there is an opinion that the painting was such a success only because it appeared on the cover of the auction catalog. Shortly after the auction, Bruskin moved to New York, where the Marlborough Gallery signed a contract with him.

The wind of change

After the auction, the most popular questions among artists were why the Western public gave the least money for works that were most valuable in the sphere of unofficial art. For example, if someone wanted to pay so much for the work of Grisha Bruskin, then certainly the work of Ivan Chuikov should cost millions! But the Fragment of a Fence could not reach the initial price of 8 thousand.

“I bought this one,” the woman said, pointing to some photograph in the catalog. “Or this one. I do not remember exactly”.

“It doesn’t matter”, the man answered. “The main thing is that you will have something to remember tonight”.

After the auction, Andrew Solomon witnessed a dialogue between a man and a woman who bought some paintings.

As a result, most of the works became just souvenirs from a Far-Away land. Seeing how easy it is to raise the bid up to thousands of pounds, the artists saw that they really could get rich. Sven Gundlach subsequently refused to perform with his music group, because simply singing did not bring such money as a sold painting. And during the first organized exhibition of the Soviet avant-garde in Berlin, previously unofficial and now famous Moscow artists spoke not about what an amazing opportunity fell on their creative path. But there was talk about how to buy a computer and bring it to the USSR.

Finally, according to preliminary estimates, the amount made on the auction should have been a maximum of GBP 1,068,400. But this Sotheby’s, with the help of unofficial Moscow artists, brought incredible profit: GBP 2,085,050.

As a result, the auction marked the onset of the era of the market. Moreover, holding the auction coincided with the refusal of the government to subsidize art. Because of that, unofficial artists of Moscow took the path of commercialization. They watched as their miniature creative world rushed into the world of applications, deals, and personal exhibitions. Also even second-rate works were a success – as a curiosity from the USSR. As a result, this contradicted all the ideals of the unofficial creative environment.

The collapse of Soviet society — its patterns of life, standards, and myths — is the end of unofficial art as a special phenomenon. Certainly, the Sotheby’s auction in 1988 seems to put an official bold dot to it.

Want to read more about unofficial and unexpected?

Dive into The Most Scandalous Artworks of Marcel Duchamp!

Or here is some classical Russian art for you:

Russian Winter in Konstantin Korovin’s Eyes and the Italian Landscapes Through the Eyes of Russian Artists.