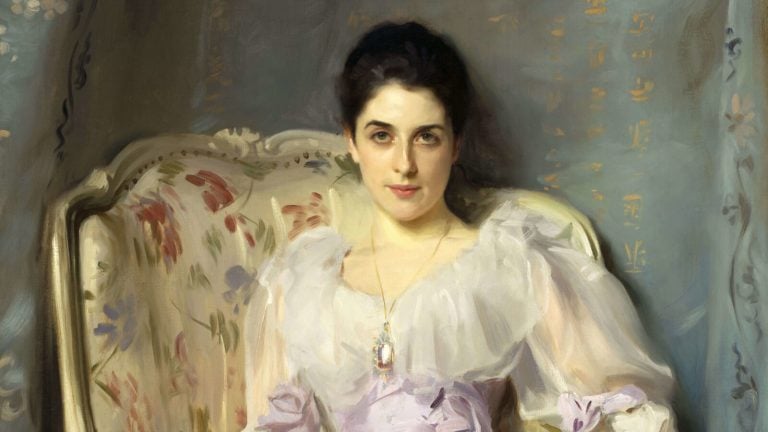 Lady Agnew of Lochnaw is a masterpiece by John Singer Sargent. It portrays a Victorian woman in a bold, modern manner. Sargent combined masterful sensitivity to the subject’s surroundings with his attention to detail in Lady Agnew’s prominent figure, creating something both bold and beautiful. Isn’t she beautiful?

John Singer Sargent (1856-1925) was one of the most fashionable portrait painters of late Victorian and Edwardian society. He was in demand by high society for over 30 years from the 1880s to the 1910s. Furthermore, Sargent had an international background that complimented his international clients.

In 1856, he was born to American parents in Florence, Italy. In 1874, he began studying in Paris, France. He arrived in London, UK in 1886 and in 1893, he displayed Lady Agnew of Lochnaw at the Royal Academy of London. The landmark portrait secured Sargent’s high artistic position in British society. It also catapulted the little-known Lady Agnew to the center of fashionable London circles. Lady Agnew of Lochnaw is a masterpiece of John Singer Sargent and today’s treasure of the Scottish National Gallery.

John Singer Sargent painted Lady Agnew of Lochnaw as an oil on canvas in 1892. It measures 127 cm high by 101 cm wide (50 in high by 40 in wide). The portrait is lifesize and therefore has quite a commanding presence. The painting displays the youthful Lady Gertrude Agnew of Lochnaw (1864-1932). She was 28 years old when she sat for Sargent, and the artist masterfully captured her fresh complexion and relaxed composure. Lady Agnew sat in an 18th-century French armchair upholstered in floral fabric against a Chinese silk drapery colored in blue and gold.

Lady Agnew confidently gazes at the viewer with unabashed wide eyes. Her confident direct look was very unusual for ladies’ portraits during the 1890s when British society was entrenched in Victorian ideals of modest femininity. More conventional portraits of aristocratic women had the sitters gazing downward, off to the side, or upon another person or object in the painting. To have a lady sit and stare at the viewer was unconventional, but it was enthusiastically received as bold and beautiful. Grand portraiture would never be the same after Sargent broke with tradition in Lady Agnew of Lochnaw.

Lady Agnew is a British aristocratic woman with extremely dark brown hair, light fair skin, and blush red lips. She wears a charming ensemble of a cream-flowing dress with lilac ribbon accents. She has little jewelry on with only a single gold pendant necklace and a single gold bracelet. Many women sitting for a famous artist would wear their largest jewels, display their most elaborate clothes, and surround themselves with abundant décor. Lady Agnew, however, decided to go with simplicity. Her simple attire and refined décor enhance her natural beauty by not being a distraction. The viewer admires the woman and not her possessions.

Lady Agnew of Lochnaw was painted by Sargent in only six sittings, which was fairly quick at the time. Sargent was a master portraitist by 1892, and therefore he did not need many sessions to capture the essence of his subject. He used a loose, fluid style for his portraits that easily captured the surfaces and textures of expensive fabrics. However, when Sargent painted his subjects’ skin and features, he was very meticulous. He would use many translucent layers to create depth and warmth in his subjects’ flesh and skin. This technique creates a beautiful contrast between a sharply defined figure surrounded by blurry, loose fabrics and surroundings. It is as if the solid person is floating in an ethereal world, resulting in a poetic sensitivity.

Because of the success of her portrait, Lady Agnew became a celebrity in London for many years following 1892. However, the success she gained came with expensive costs. Although Sargent’s portrait initiated Lady Agnew’s social success, it did not guarantee the money to finance it.

Lady Agnew became so indebted towards the end of her life that she sold her famous Sargent portrait in 1925 to the Scottish National Gallery in Edinburgh to clear many of her outstanding, pressing debts. It is coincidental that Sargent died that same year. Perhaps Lady Agnew was embarrassed to sell her portrait while the artist was still alive, and she waited until he died. We may never know. However, what we do know is that Lady Agnew of Lochnaw is a masterpiece of Victorian portraiture. It shows a Victorian woman in a bold, modern manner. Modernity and sensuality combined create something bold and beautiful. Who doesn’t appreciate bold beauty like this one?