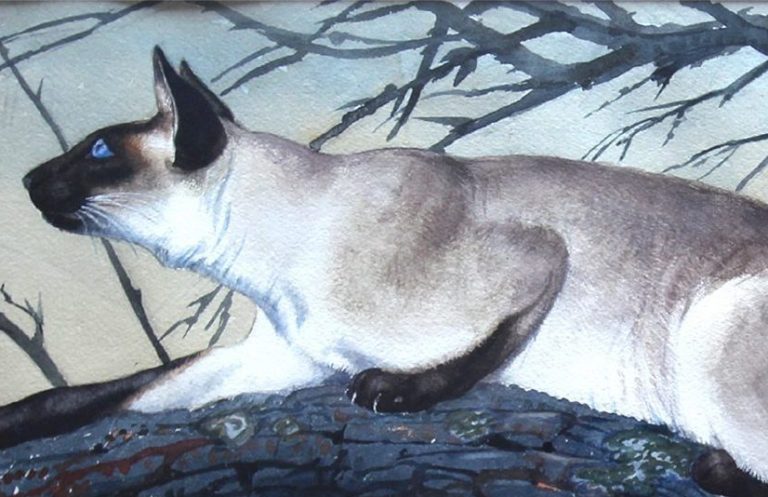 Cat Obsession Embodied: Check Out These Cat Museums from All Around the World

Charles Frederick Tunnicliffe, a British engraver, illustrator, and painter is perhaps best known for his paintings of birds. He painted many other animals however, including monkeys, dogs, bulls, and indeed humans! My favorite Tunnicliffe paintings though are his depictions of cats.

Charles Frederick Tunnicliffe was born in 1901 in Langley, Macclesfield (UK). Tunnicliffe grew up on a farm before winning a scholarship to the Royal College of Art in London. In 1947 he moved to Malltraeth on the Isle of Anglesey, North Wales, where he remained until his death in 1979. Tunnicliffe, who spent most of his life as a freelance artist, worked in several media including watercolor, aquatint, and oils, also sometimes deferring to wood engraving, etching, and woodcut.

His work is particularly renowned for its realistic representation of birds and other animals in their natural habitats. His painting is detailed and precise, but also fluid and naturalistic as though each subject is seen as it would be in the wild rather than set up as a model in a studio.

Harry Heuser, in a speech delivered at the Royal Academy of Art in London, said:

The thing is, Tunnicliffe’s pictures were not designed as vehicles for his own thoughts.

I think this is true. There is no agenda to be found in Tunnicliffe’s art: no political statements, no moral lessons, and no barbed messages of any kind. His art is representational and designed to detail the wonder of the natural world as he saw it. Despite no intentional revelation of the “self” in his works, they nevertheless retain his flavor. Tunnicliffe captured his subjects – whatever they were – in a particular way, noting not only their physical characteristics but also their actual presence as they moved through the world.

Perhaps then we are allowed a moment or two when we look at his paintings to romantically link the artist with his works. We might imagine that maybe Tunnicliffe simply saw himself as part of the biology that he studied so closely. This sense of connectivity lends more than observational acuity to his paintings, so where there may not be a deliberate point to be made on his part, there is a sense of vigorous energy and life to what we see when we look at his work.

This is what I love about his cats. They are playful and mischievous as cats should be. They are beautiful to behold because even when they are relaxing in flower beds they are still totally absorbed with the business of being cats, nothing more and nothing less! Because of Tunnicliffe’s close examination of them, they can never really be reduced to mere flesh and bone. I also think that we get a sense of the personalities of these lovely creatures as the artist viewed them.

Tunnicliffe’s studio collection was acquired by Anglesey County Council in 1981, and a museum and gallery for the purpose of exhibiting this body of work – Oriel Ynys Môn – was opened in 1991. It now contains other important works by Welsh artists in addition to those by Tunnicliffe.