Romeo and Juliet of the East: Laila and Majnun 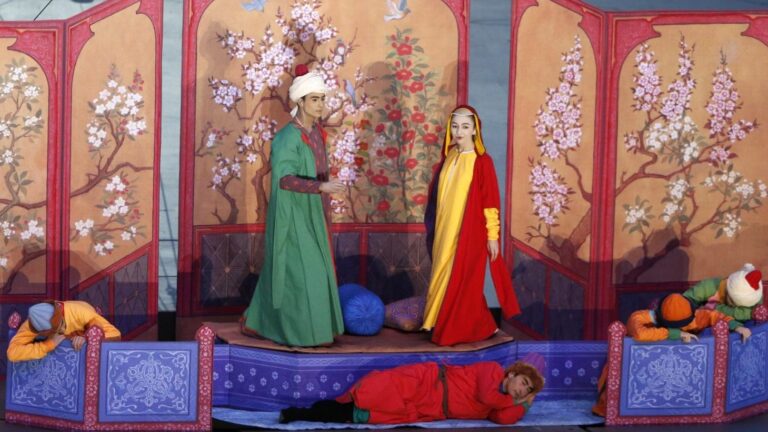 Laila and Majnun, theatre play at the Opening Ceremony of the 2015 European Games in Baku, Azerbaijan. Wikimedia Commons.

Laila and Qays are the Romeo and Juliet of the East. The tragic tale of these ill-fated lovers has been widely featured in Asian and Middle Eastern folklore. The story of their unconsummated love has been told many times in Arabic, Persian, Turkish, Azerbaijani, and Indian cultures, and been a great source of artistic inspiration.

It is believed that Qays and Laila lived in Bedouin Arabia in the 7th Century. Qays ibn-al Mullawah was a poet who was captivated by Layla al-Aamiriya, a wealthy girl who belonged to the same tribe. Though there are several versions of their story, the most well-known legend of Laila and Majnun was popularized in the 12th century by the great Persian poet, Nizami Ganjavi.

Qays’ love for Layla was intense and his affections unreserved. Although Laila loved him too, her family thought Qays to be mentally unstable and found his audacious admiration of Laila inappropriate. When Qays asked for Laila’s hand in marriage, her family turned him down and betrothed her to a more appropriate suitor.

Laila was soon married off to another man and remained a faithful wife. In some versions of the story she never consummated her marriage out of loyalty to her true beloved. As a result, forbidden from being with his true love, Qays lost all motivation to live and became a recluse. He wandered the forests in despair and spent his days composing poetry and pining for Laila. Consequently, this earned him the epithet of ‘Majnun’ (one madly possessed with love).

Laila Visits Majnun in the Forest

Many artworks were created depicting their tragic tale. For example, a popular rendition features Laila visiting Majnun in the forest to urge him to eat. Laila is usually depicted well-dressed, her clothes and hairstyles vary depending on the tradition of the region where the painting was rendered. Majnun, on the other hand, is usually portrayed as a withered and shrunken man who is surrounded by forest animals. It is believed that the animals were his constant companions and showed Majnun great compassion.

Aside from the paintings, there are many poems, songs, couplets, and plays about or based on the story of Laila and Majnun. This love story has also inspired several Bollywood films, some as recent as 2018.

According to some Indian versions of the lore, the ill-fated couple eventually ran away together but died in the desert while being pursued by Laila’s family. Just before their death, they found refuge in Binjaur, a small Indian village near the border between India and Pakistan. Though greatly disputed, locals believe that Laila and Qays are buried here and revere their graves as a symbol of love. The mazhar (mausoleum) continues to attract many tourists each year.