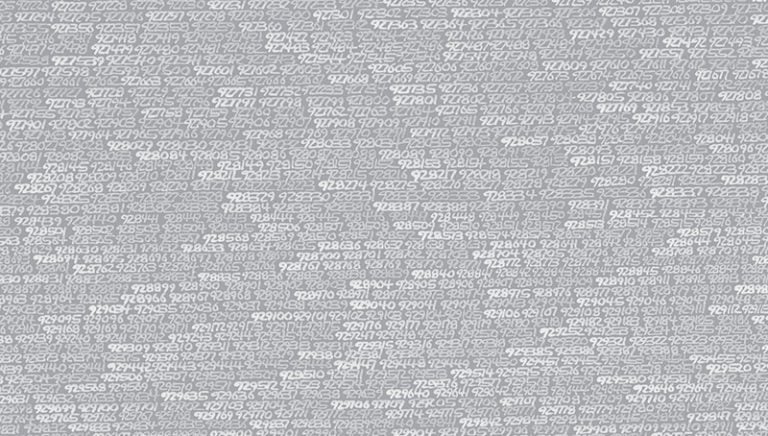 Pollen, Purity and Patience: A Journey of Creation with Wolfgang Laib

In 1965 a French-born Polish painter Roman Opałka came to an important decision. While sitting at the Café Bristol in Warsaw waiting for his wife to arrive, an idea came into his mind to begin painting numbers from one to infinity that would progress sequentially from one canvas to the next for the duration of his life. Let’s count with Roman Opałka.

Roman Opałka (1931–2011) began to paint numbers from one to infinity in his studio in Warsaw, starting from the top-left corner of the canvas, finishing in the right one below, and after that taking a new canvas to continue the counting. Typically he would paint around 400 figures a day.

Every new canvas that the artist took, denominated Détail, continued the count where the last one left off. All the canvases have the same size of 195 x 35 cm and the height would correspond to the artist’s physical height, whereas the width was derived from the girth of the door to his Warsaw studio where the project began. All the works also have the same title: 1965/1-∞. “1965” stands for the year when Opałka’s counting started and “1-∞” signifies the beginning and the undefinable ending of his oeuvre. As his ultimate goal was infinity it was a project he never completed.

From Black to White

Over the years, Opałka made slight adjustments to his ritual. In his first Détails, he painted white numbers on a black canvas. Two years later he opted for a grey canvas with an explanation that for him grey is not a symbolic color, not an emotional one. From 1972 he gradually lightened his grey canvases by adding one percent of white pigment to the ground with each Détail. He was envisioning the slow disappearance of his notes in white on white, the numerals that would finally dissolve into the surface, embody the surface. There would be no distinction between the numerals and the white surface as a form of blankness, tabula rasa.

In each composition, tiny numbers are organized in narrow horizontal rows, without commas or number breaks, and Opałka himself was painting by hand and without the help of rulers.

Opałka introduced a tape recorder, speaking each number into the microphone as he painted it. He also began taking black and white photographs of himself – frontal headshots in front of the canvas in his studio upon the completion of a day’s work, where each self-portrait is created in the same way with him wearing the same white t-shirt. Every portrait was selected by Opałka and accompanied each painting. In this way, his paintings recorded the passing of time and artistic evolution through the gesture of a hand, and his recordings and photographs captured his aging process.

From the day his project began until his death, Opałka combined clear conceptual thinking with painterly materials. His search for infinity through painting became a form of phenomenology, which in retrospect might be seen as a parallel to the philosophy of Hegel. Through his attention to a paradoxically complex, reductive manner of painting, Opałka focused on infinite possibilities latent within his project. He would count aloud each numeral while coordinating the tiny movements of his brush.

Since 2008, he has painted in white on a white background, a color he called blanc merité (a well-earned white) and the numbers for the last three years of his life were white.

Though his artistic quest might have seemed bloodless and abstract, Roman Opałka described it passionately as a grand metaphor for human existence:

Time as we live it and as we create it embodies our progressive disappearance, we are at the same time alive and in the face of death – that is the mystery of all living beings.

Roman Opałka quoted in “Roman Opalka, an Artist of Numbers, Is Dead at 79“, New York Times.

It is difficult to envision a life made up of numbers. His Détails do not offer insight into his inner life, thoughts, or identity. Their content is not personal and yet, we are left with something incredibly intimate: the actual minutes of the artist’s lifetime.

While Opałka’s work has been shown internationally for years, including at Documenta in Kassel in 1977, the São Paulo Art Biennial in 1987, and the Venice Biennale in 1995 and 2003, it never received the widespread recognition it deserves. In his uncompromising devotion to systematic art practice, Opałka relates to such artists as Daniel Buren, On Kawara, Hanne Darboven, and Cy Twombly (grey paintings).

The Final Number to Infinity

Opałka’s synthesis became an idea of painting as a result of a numerical destiny. He calculated that he would reach the stage of white on white at 7,777,777. Consistent with his calculations, he passed away near Rome ten days before his 80th birthday in 2011 and he never met his declared goal to “get up to the white on white and still be alive”. The final number he painted was 5,607,249.

Each canvas – or Détail – constituted a part of the whole. With his entire oeuvre of 233 Détails at the end of his life, he understood his work as the culmination of a lifetime of painting when he famously proclaimed:

It’s important that my last Détail should not be finished by me, but my life.

His life-long project remained intact, as he wished it: within whiteness, on the verge of infinity. Carpe Diem.