When you think about Modernist architecture, probably Le Corbusier, Mies van der Rohe, or Oscar Niemeyer comes to mind. But have you paid attention to the gardens or green spaces that surround the projects of these Modernist classics? Here, there is one name that you need to know – Roberto Burle Marx. He was a landscape designer, painter, sculptor, and textile designer that worked alongside the most important architects of the 20th century, creating art with nature.

Roberto Burle Marx was born on August 4th, 1909, in Sao Paulo but lived most of his life in Rio de Janeiro. His father was German, and in 1928, the family moved to Berlin. The young Burle Marx, surrounded by the effervescent cultural momentum, soaked up all he could. While studying music and art, he visited museums and art galleries, where he learned about Cubism, Abstraction, and the German Expressionists; he also went to operas, theater, and concerts.

It was during a visit to the Berlin Botanic Gardens, looking for inspiration and subjects for drawing studies, that he first encountered specimens of Brazilian native flora and became fascinated by them. This moment would be crucial for his career and for Brazilian Modernism. 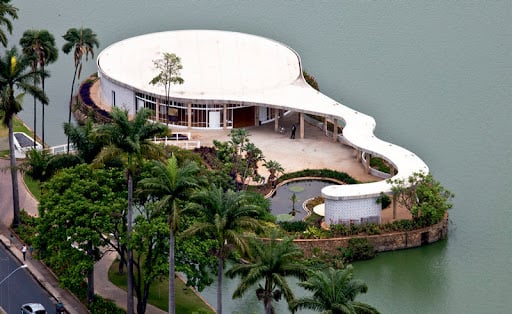 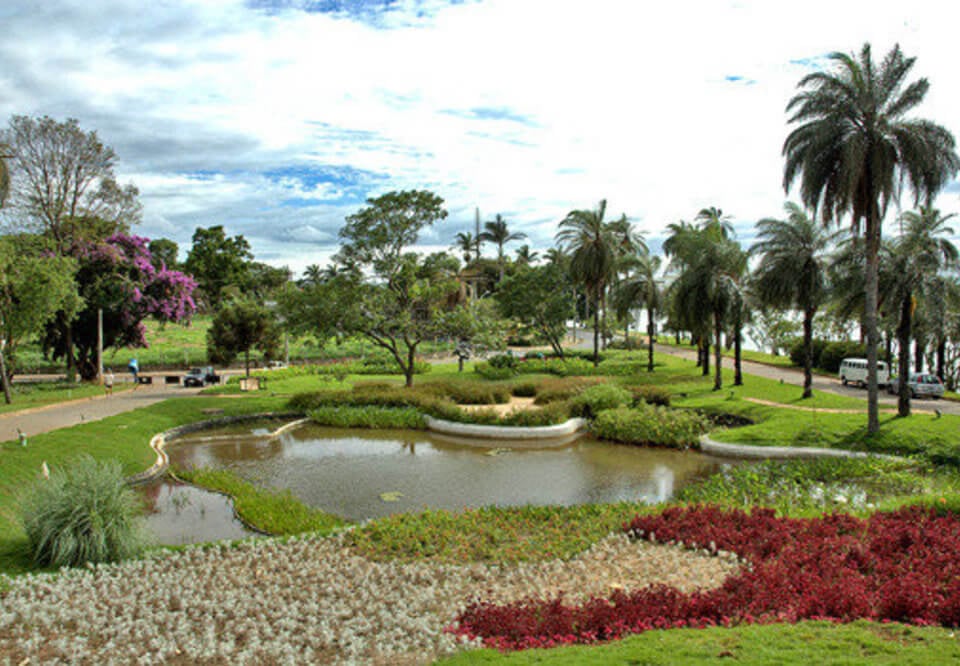 While studying music and art, he visited museums and art galleries, where he learned about Cubism, Abstraction, and the German Expressionists.

It was during a visit to the Berlin Botanic Gardens that he first encountered specimens of Brazilian native flora and became fascinated by them.

Following his return to Brazil in 1930, Burle Marx attended visual arts and architecture classes at the Escola Nacional de Belas Artes (National School of Fine Arts), where he started to incorporate native plants into his studies.

By that time, Lucio Costa, a big name in Brazilian architecture, was teaching at the school and invited Burle Marx to collaborate on one of his projects. It was the first of many works in partnership with Costa and was soon followed by connections with Oscar Niemeyer and Rino Levi among other celebrated names of Modernist architecture in the country.

Works from these successful collaborations include landscape designs for the new capital, Brasilia, the Pampulha Modern Ensemble in Belo Horizonte, the Rio de Janeiro Museum of Modern Art, and Olivo Gomes House. 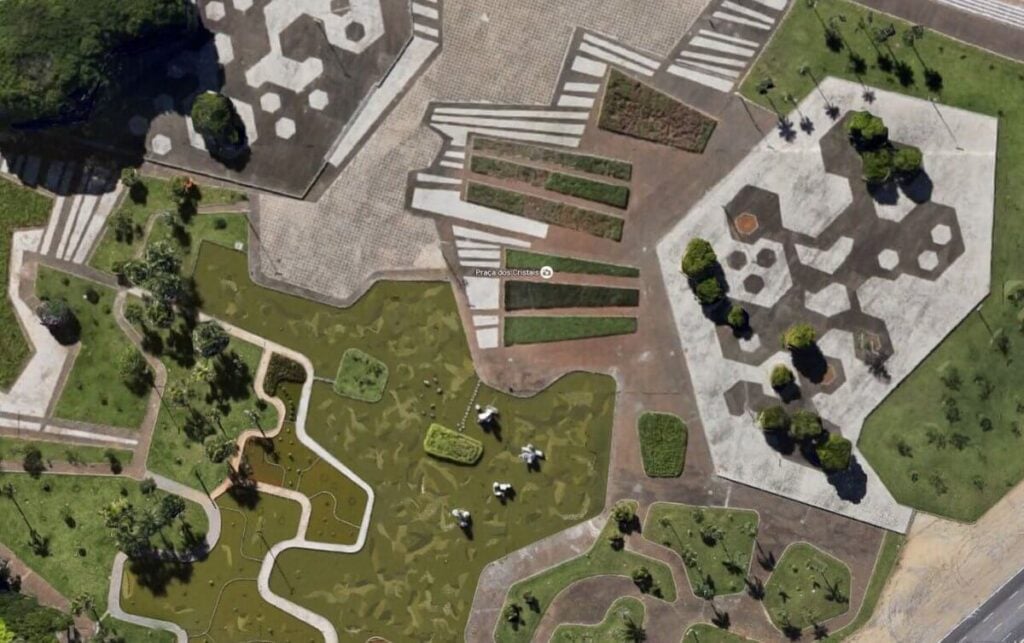 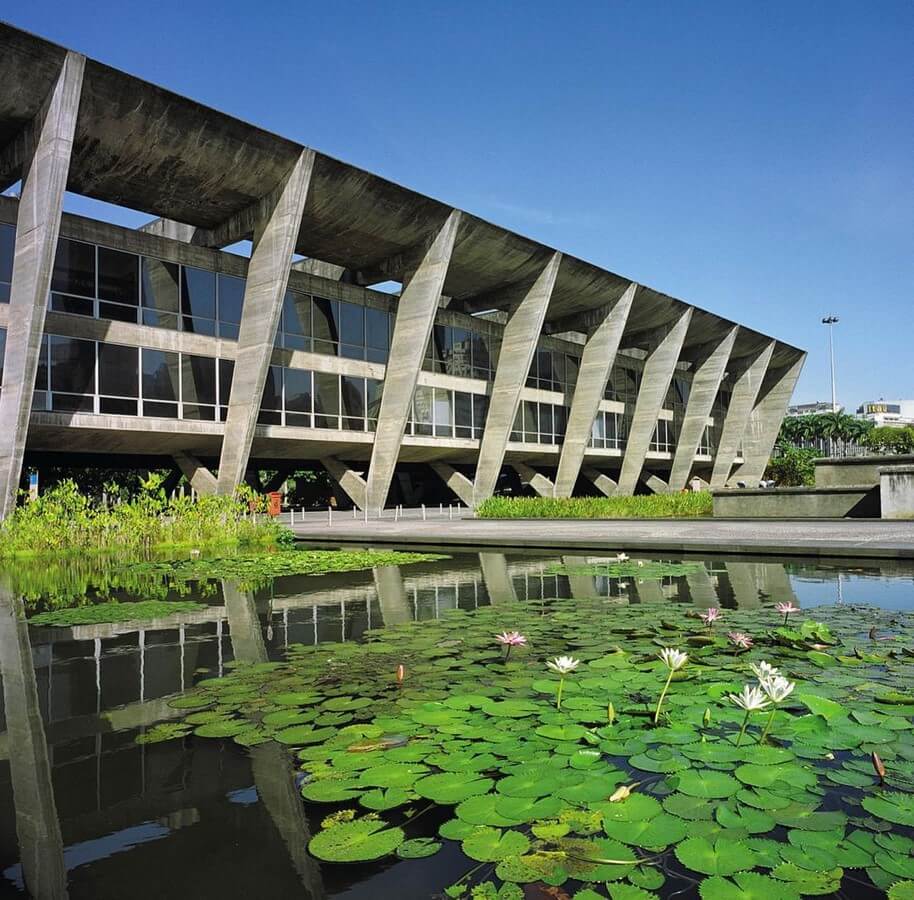 A bird’s view over the Gardens in Brasilia.

View of a pond in the Museum of Modern Art, Rio de Janeiro, Brazil.

The Copacabana Promenade (Calçadão de Copacabana), the most famous and recognizable of Burle Marx’s works, was finished in 1970 and became an icon of Rio de Janeiro city. The wavy design and layout of more than four kilometers of the mosaic boardwalk were made with Portuguese stones together with native trees and plants. Seen from above, the promenade looks like a black and white abstract painting coming to life. 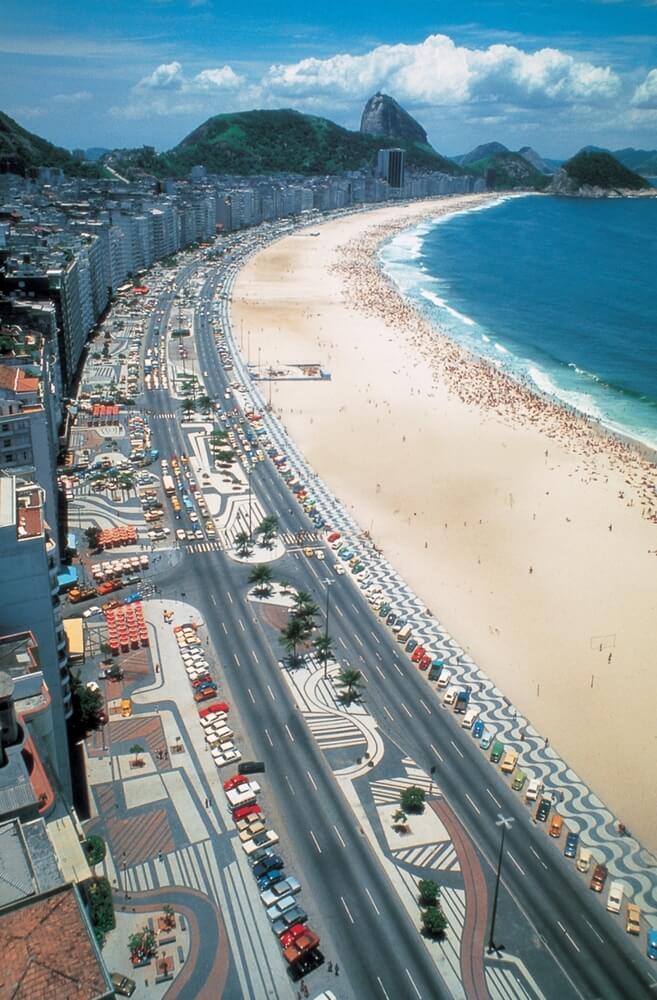 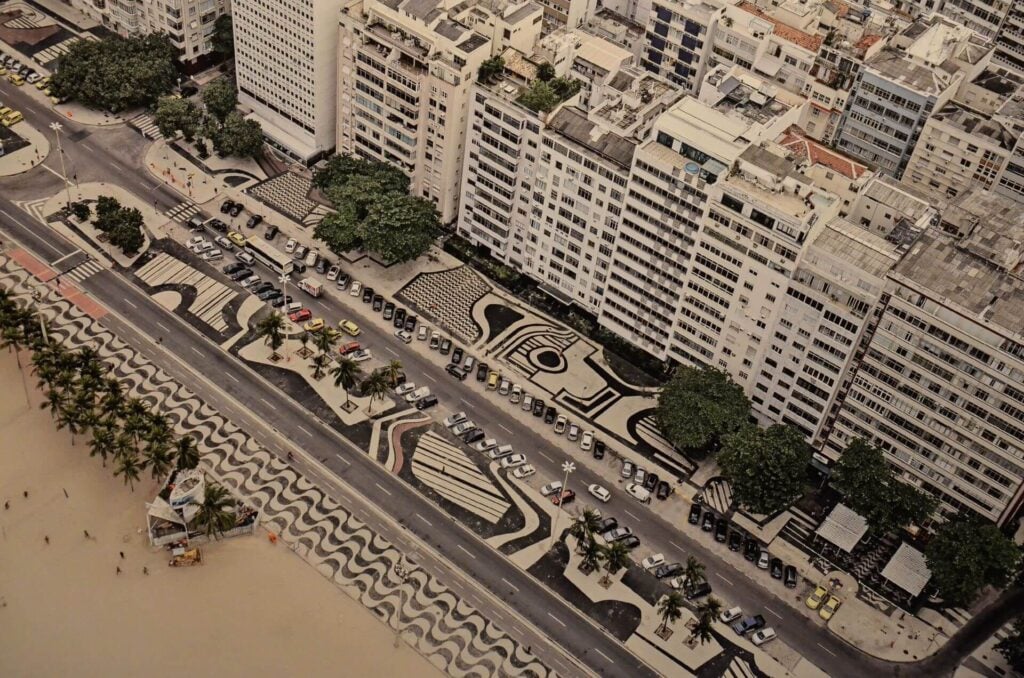 The Copacabana Promenade (Calçadão de Copacabana) is the most famous and recognizable of Burle Marx’s works.

It was finished in 1970 and became an icon of Rio de Janeiro city.

Another important aspect in Burle Marx’s work was the ecological expeditions he did in the heart of Brazilian forests to collect various specimens, creating some sort of “alive mood board” for future projects.

In 1949, he acquired an estate in the outskirts of Rio, where he lived, worked, and cultivated the plants collected from different parts of the country. Together with a team of biologists and gardeners, he discovered more than 50 plant specimens that were named after him.

Over the years, Burle Marx became more and more worried about deforestation and engaged in nature conservation initiatives in Brazil.

In 2021, UNESCO included his estate, Sitio Roberto Burle Marx, on the World Heritage List for its extraordinary Modernist architecture and ecological and cultural relevance. 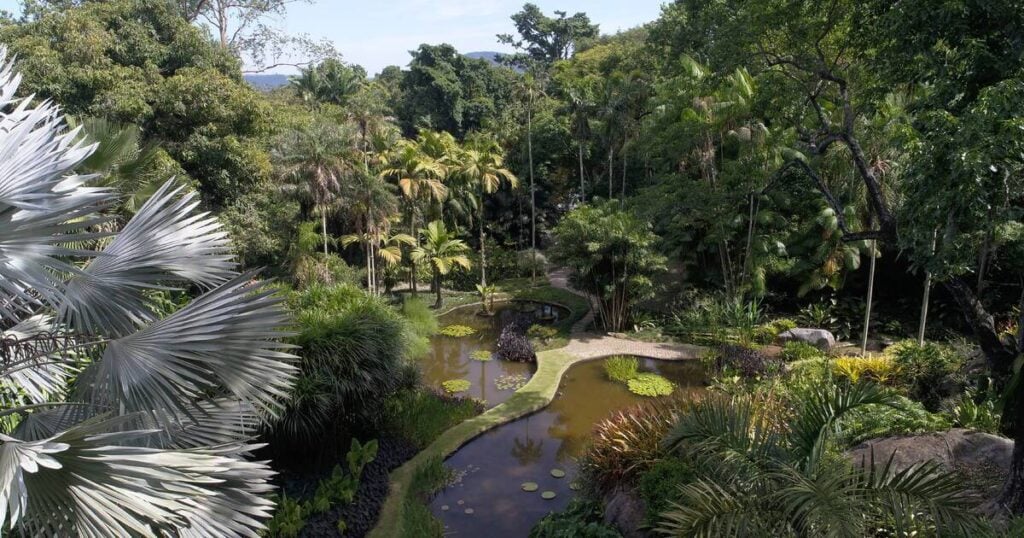 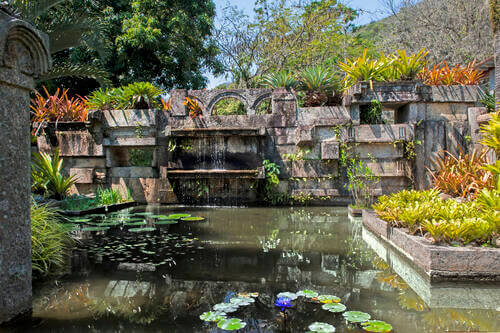 In 1949, he acquired an estate in the outskirts of Rio, where he lived, worked, and cultivated the plants collected from different parts of the country. Together with a team of biologists and gardeners, he discovered more than 50 plant specimens that were named after him.

In 2021, UNESCO included his estate, Sitio Roberto Burle Marx, on the World Heritage List for its extraordinary Modernist architecture and ecological and cultural relevance.

Life as an Artist

While becoming a celebrated landscape designer, Burle Marx never stopped creating art in other mediums. He had lessons and was an assistant to Candido Portinari in the 1930s and throughout the years got closer and closer to abstraction.

His use of color is effusive, and he explored painting, sculpture, tapestry, and jewelry design. Even his projects’ technical drawings look like abstract drawings.

In a way, there’s not exactly a division between his landscapes and his paintings. One fed the other and that is what makes the works so brilliant and innovative. 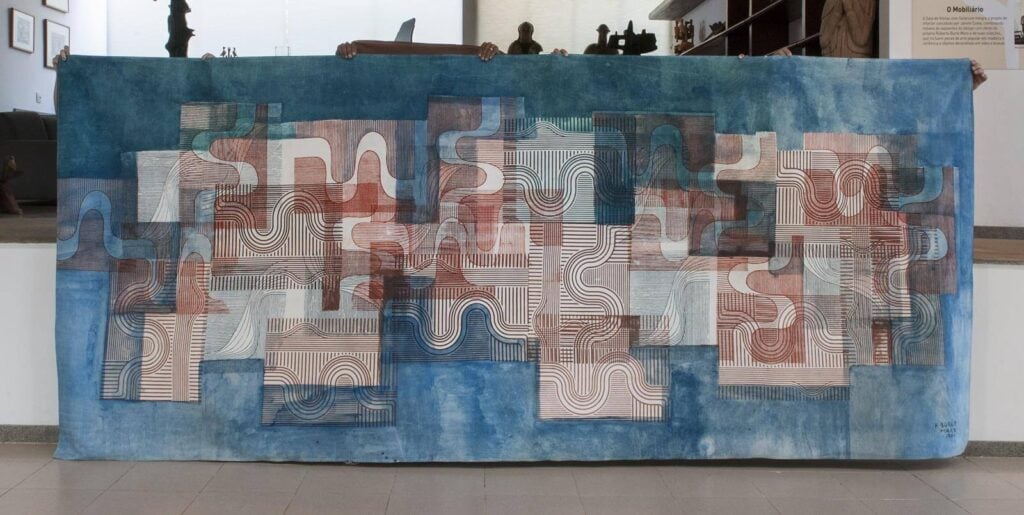 His use of color is effusive, and he explored painting, sculpture, tapestry, and jewelry design.

An Icon of Brazilian Modernism

With a career spanning more than 60 years, Burle Marx is regarded as the pioneer of Modernist landscape design, not only in Brazil but worldwide. He was awarded countless prizes, medals, diplomas of merit, and honorary memberships.

In the 1930s, he rejected the traditional way of building gardens in English or French styles and importing vegetation from Europe, choosing instead to promote the local nature, culture, and forms. In addition, Burle Marx’s innovative approach to the use of nature in architectural projects transformed the way we understand landscape design as a crucial part of the experience of public and private spaces.

Visit the artist’s website to learn more and browse its rich online collection.

Helmut Jahn died in a bicycle accident on 8 May 2021, he was 81. You might have seen his obituaries in the newspapers and, if you missed them, this...