Story within a Story in Paula Rego’s World 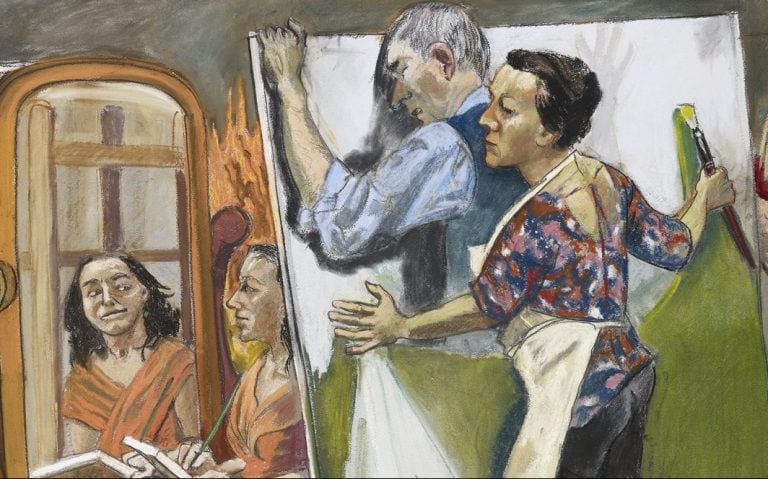 Paula Rego was probably the most important figure in the narrative British painting. She drew her inspiration from fairytales, myths, animations and transformed the stories into mysterious, often unsettling paintings. In Rego’s world, nothing is as it seems.

Paula Rego, DBE RA, was a British painter born in Portugal. Her interest in stories was rooted in her childhood, when her nanny used to tell her various tales. Usually, the narrative clues in her paintings are ambiguous, and they can have several endings. In this case, are the women helping the man or hurting him? Who is the little girl at the window? What does the Portuguese retablo featuring St. Joan, and St. George slaying the dragon have to do with all this?

This painting is a story within a story. It’s based on Jean Genet’s play The Maids (1947), which in turn was based on the real-life case of two sisters, Christine and Léa Papin, who worked as maids for a rich Parisian family. One day, for no apparent reason, they brutally murdered the mother and daughter of the family. Paula Rego tried to convey the claustrophobic atmosphere by cluttering the space with random furniture. Bright red heightens the tension and adds the feeling of menacing psychosis. Isn’t there something uncertain about the sex of the seated figure? And how about the black boar?

Some see in this painting a reference to Velasquez’s Las Meninas… Whether you see it, or not, this imagery is loaded with symbolism and contemporary mythologies. All showed from a woman’s point of view.

Do you recognize this tale? It’s Snow White! Paula Rego dressed a middle-aged woman in the famous Disney costume to expose the fallible value we tend to assign to youth. She lays clutching her skirts, as if trying to cling to life and her femininity which are slipping away. Rego commented on how society imposes imagined expectations of youth and beauty on women.