The Provocative Art of Pat Douthwaite 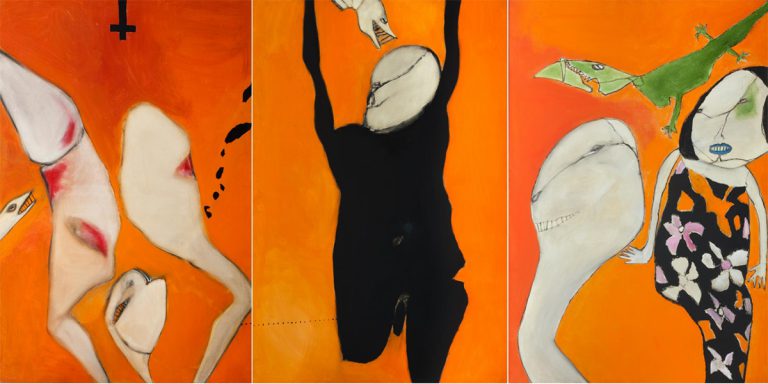 Pat Douthwaite, The End of the World, 1970, The Scottish Gallery, Edinburgh, Scotland, UK.

Pat Douthwaite (1934-2002), a Scottish-born artist producing her most astonishing work during the 1960s and the first half of the 1970s, has been overlooked until more recently. Now however she is being discovered, and rightly so. Her art in retrospective terms was controversial, but it is still as provocative and brilliant through our current lens.

Douthwaite’s work has the rawness of someone who is self-taught, but it is clear when viewing it that not only did she possess a singular talent, but also a shrewd understanding of how the art would work for her. Her compositions have a driving, aggressive quality that can be relentlessly shocking while at the same time being utterly under her control. Originally a dancer, she was innately creative but with a huge physical aspect to her productive drive. She had studied mime, movement, and dance under Margaret Morris, who happened to be married to John Fergusson – one of the celebrated Scottish Colourists. Fergusson actively encouraged the young Douthwaite to paint, but not to attend art school for fear that it would spoil her originality.

By 1958 Douthwaite had moved to East Anglia to live among other artists. Here she met Paul Hogarth, with whom she had a child (Toby). Her singular talent was one of the reasons for the couple’s split: Douthwaite was a formidable artist and Hogarth felt himself to be in her shadow. Her son later said of his mother:

“[…] her work was the most important thing to her – she was relentlessly driven by strong creative energy and produced an amazing quantity of paintings and drawings. Themes and ideas would seem to come from nowhere […]”

Her internal world was played out, perhaps even lived out, on canvas. For Douthwaite the act of creating visual art was an emotional need, and also a physical one. Her performing arts background produced a very somatic painter: Douthwaite painted as though she was choreographing something for the stage. Her work is at times even loose enough to seem improvised – interpretive dance at an indomitable level.

Reading about her life there is a clear sense of conflict: she needed to control every aspect of her life and yet also to be free. We see friction between these traits in her work, transmitted in visual violence reminiscent of Francis Bacon. Douthwaite was a little later in recent art history than Bacon, yet the two share an immutable quality of deep, inner violence. Viewing Douthwaite’s art from this particular period in her career is indeed simultaneously painful and liberating.

In her daily life the conflict between freedom and control manifested in different ways: artistic successes and setbacks; financial fluidity and deprivation; stability in her personal relationships, and collapse. Her strategy for living seems to have been polarized by extreme confidence and catastrophic fragility. We can see this in her artistic style. Douthwaite’s figures are strong, sometimes menacing, and powerful in terms of their characters, but the lines that form them are themselves polarized. Black, violent slashes combine with scrawls or scribbles in counterpoint; the ugly, unpleasant persona below is made more terrifying by a contrasting ballet pink background.

In this way the thunder found in her subjects is often underpinned by something in opposition; frailty, anxiety and fear can all be found in her paintings too. There is a hard shell, but its imperfections at times imply that something more delicate is trying to live within.

It is so often our egocentric, ideological sense of self which clashes with that other, more responsible self– the one that knows how we should appear in the world, especially to others. Generally we temper our behaviours to fit in. I mean this in the broad sense of acceptance of social norms: don’t hurt people; don’t steal; don’t lie or deceive. We know what is right and we know what is wrong. Douthwaite’s art shows us the ‘rightness’ by expounding ‘wrongness’ in a gritty, unapologetic outpouring of a foundational hunger for the more primal instincts.

The female body is a central theme of Douthwaite’s work. Her depictions of the female and of femininity directly challenged the expectations of the time, and still do today. She invokes traditionally repellent aspects of womanhood: a lack of control, a lack of decency, and a will to autonomy; or in the eyes of the male gaze perhaps, a will to rebuff what he might find attractive and to not care how he sees her. What is an out-of-control woman in this context anyway? Out of whose control exactly? Douthwaite’s art raises such questions purposefully.

It is interesting that Douthwaite depicts her more lascivious female figures with reptiles. In a Biblical context, reptiles are synonymous with evil. Are we seeing conflict between her urge to express her natural, sexual instincts and an idea of dirtiness or wrongness in doing so?

It’s difficult to admit that as human beings we have internal desires that have to be controlled because of their innate tendencies to be destructive. Yet at the same time without these aspects to our deeper selves we would be incomplete. It is not enough only to express the things that people want to see – those aspects which are more universally acceptable – unless you are made of fairy dust! Most of us aren’t made of loveliness alone. There is also darkness. We are guilty of malevolence, and of indulging – even if only in passing – our less attractive feelings. We can be base and unpleasant and it is difficult to acknowledge that we have an inherent capacity for malice.

Douthwaite’s art confronts this idea and transforms it into something affirming. Yes, we are often far from saintly, but we are so much better equipped if we can find ways to accept it by safely examining that side of ourselves. As a result we can hope to exert self-control if our understanding has been enabled. Exploring Douthwaite is an opportunity to observe this particular struggle in motion, and to take lessons away from it. For the artist herself, maybe painting visceral and provocative subjects was a process of self-examination and, on some level, redemption.

In her paintings we often see the female figure striving for freedom. Nudes dance wildly, expressing sexuality that is wanton and emancipated from what was considered to be proper. The male figures below on the other hand appear to be whispering covertly, their eyes narrowed and looking this way. They seem disapproving: Douthwaite came up against this kind of censure as a female artist. Inside the ear of the figure on the left, there is a mouth. Is it trying to speak? Is this mouth pouring poison into the ear of the speaker? Could it be Douthwaite herself, trying to be heard? There is a distinct sense of a self that is trapped or constrained.

Guy Peploe of The Scottish Gallery (and author of a recent biography of Douthwaite) suggested that had she been a man, her life may have been different in terms of artistic success. He implies that a man would have been seen as eccentric, or as a force of nature, and more readily embraced by the art world. The idea of a woman, and a mother too, painting with the same kind of freedom, and making challenging statements about her identity, was not received in the same way. Rather, when a woman does this it is an aberration, and she is herself an abnormality. Douthwaite described herself as the ‘High Priestess of the Grotesque’.

Many other female artists of the 1960s and 1970s were exploring ideas about what it meant to be a contemporary female artist in a predominantly male industry. Ana Mendieta, Cindy Sherman, and Carolee Schneemann to name a few were breaking apart the precepts that governed an embedded, patriarchal view of female artists. Even now the idea that culture is organized according to gender, and that men have the upper hand within that culture, hasn’t entirely gone away. Nevertheless, the aforementioned artists, and many others besides, have contributed a huge amount to breaking down those particular barriers. The unusual thing about Douthwaite is that although she has made a striking contribution to this cause, she didn’t necessarily mean to do it! It was not her goal to ‘be a feminist’. She simply interpreted the world according to Pat, and what a world.

One of the most powerful statements of Douthewaite’s art is that she does not submit to masculine control. Despite having been at the mercy of it throughout her career, she declaims the female as autonomous. Douthwaite throws off the constraints which form the conventional axioms of femininity. She tramples all over regulations as to what comprises ideal womanhood, or indeed the ideal female artist. She was a renegade and a rebel, and her art is astonishing.