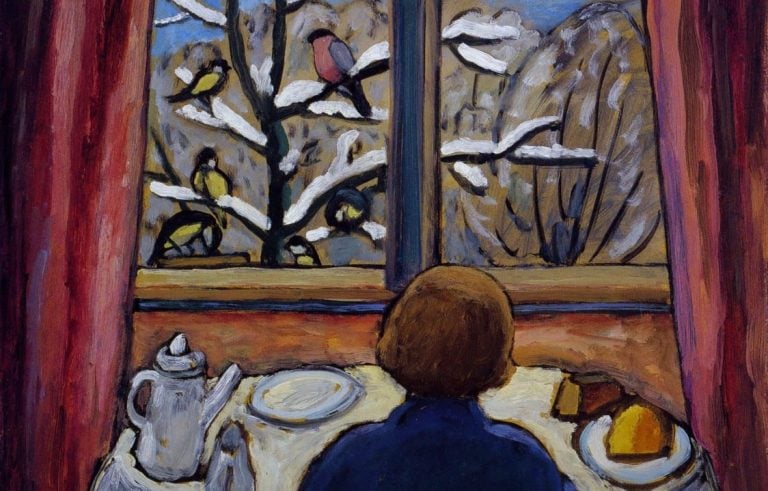 Gabriele Münter (1877-1962) was a German Expressionist painter born in Berlin and most known for her landscapes and use of color. She developed a love for drawing as a young child and garnered her parents support to pursue her dream to be an artist.

Münter studied at the Woman’s School of Art because as a woman, she was not allowed to attend the more prestigious German academies. Her parents both died by the time she was 21 and with her substantial inheritance she was free to travel, pursue her art, and live her life without conformity.

In Munich she studied at the Phalanx School where she developed various artistic techniques and began a romantic relationship with the Director of the School, Wassily Kandinsky.

Of Kandinsky she said:

When I began to paint it was like leaping suddenly into deep waters, and I never know beforehand whether I will be able to swim. Well it was Kandinsky who taught me the techniques of swimming.

Her relationship with Kandinsky lasted 12 years and had a profound effect on her life. In 1911, Münter, Kandinsky , Franz Marc and other avant-garde artists created Der Blaue Reiter (The Blue Rider) in Munich. The work from this group was diverse and showed an interest in free experimentation and spiritual expression.

Breakfast of Birds (1934) is a lovely painting by Münter which shows a woman (supposedly Münter) seated for breakfast at a table with her back to us. The painting reflects her Expressionist style with thick, rapid brushstrokes, dark outlines, and compressed space. Münter’s own love of color is seen in the shades of blue, yellow, and pink in her works.

The woman sits before a window framed with thick drapery which can make the viewer feel confined or comfortable depending on one’s viewpoint. She can see the snowcapped trees and birds sitting on the snow-laced branches while she quietly reflects on the view before her. Or, it can also be seen as a woman emotionally isolated, the coldness of the scene reflective of her own feelings. Either way Münter was a strong artist and a woman who lived her life uncompromised and able to pursue her dreams.