Behind the Canvas: Mary Weatherford 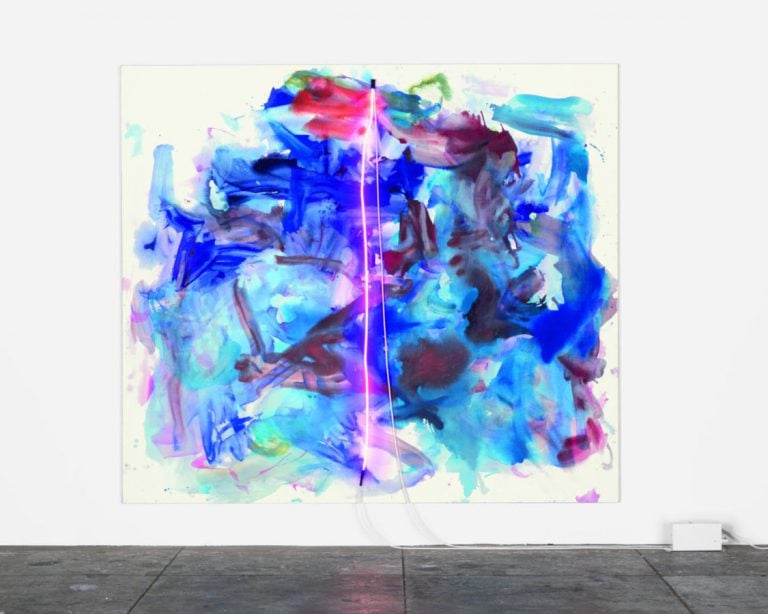 In our new series which highlights an outstanding female artist in each edition, we look behind the canvas at Mary Weatherford's illuminating inspirations and works. From today you can also meet Mary Weatherford in Gagosian's Artist Spotlight and see her exhibition online at the Tang Teaching Museum!

California-born artist Mary Weatherford has had a varied trajectory, spanning targets, silkscreens, assemblage, plein-air compositions and large-scale paintings with lights. Although Canyon-Daisy-Eden, her anticipated survey at Tang Teaching Museum, may have been cancelled due to Covid-19, we take this chance to span Weatherford's work from 1989-2017. Considering Tang's dedication to showcasing important women artists, Weatherford's show is a fitting place to launch our Behind the Canvas series. Also, you can still access elements of Canyon-Daisy-Eden online. Just visit Tang's website to find the exhibition checklist, an audio slideshow from the opening talk with the artist, as well as the Spotify playlist called "Weatherford's Women''.

In 1985, Weatherford began her artistic trajectory as a participant in the Whitney Independent Study Program. Here she created some of her earliest works, such as silkscreens and target paintings. Similarly to Jaspers Johns and Frank Stella, these geometric targets use stark rings of color to create large-scale works on canvas.

Weatherford's target paintings demonstrate an attentiveness to human experience, as well as nature, from the outset of her career. As in the pair of targets titled Nagasaki, notably resonant with the Japanese city hit by an atomic bomb, Weatherford was particularly inspired by trees and operatic heroines. Departing from Puccini's Madame Butterfly, Nagasaki represents the life of Cio Cio San (Madame Butterfly's lead). Following San's heartbreak and eventual suicide, the quakes of her anguish are represented in Weatherford's rings, almost vibrating through the canvas in her wake.

The targets were equally inspired by nature, as Weatherford interprets the growth rings of a tree trunk as an emblem for personal history. Reflecting the varied, annual growth rings, the target paintings act as timelines. Outer-rings are followed by contrasting inner-rings, revealing the hidden interiors as much as the exterior that shields them. Working the two inspirations together, the timeline of Cio Cio San's life is represented in Nagasaki's rings. Using a fictional heroine as a gateway to real life social commentary, Weatherford continues to intertwine humans with the world around them throughout her career.

The Nature of Experience

Although Weatherford made multiple target paintings as an emerging artist, silk-screening remained her key technique for years to come. Using vines, flowers and literary heroines as initial subjects, she repeatedly contextualized her atmospheric prints through their titles; these often alluded to feminized states, such as Her Insomnia and Her Clairvoyance. Again grounding a sense of narrative in otherwise ambiguous imagery, Weatherford continues to play storyteller in her works.

However, whilst her silk-screening and storytelling may have remained consistent, Weatherford's artist approach was changing. Rethinking her inspirations, she became eager to position herself as the author of her own narratives. Until now, fictional heroines had heavily influenced her works, whereas this self-reflection saw her delve deeper into her own experience for inspiration.

Silkscreens such as Night and Day hone in on both Weatherford's and the wider female psyche, exploring multiple dualities: certainty and uncertainty, the seen and unseen, comedy and tragedy. Attributing an autobiographical quality to her works, these personal history paintings draw from Weatherford's own life and feminist issues.

As her relationship with silk-screening continued to progress, Weatherford started to incorporate natural and personal elements in greater depth. With a collage approach, she often layered her silkscreens with real, found objects: seashells, starfish and sponges, to name a few. Positioning assemblage onto stained canvases allowed Weatherford to create a unique texture and composition to her work, in which she repeatedly used her sister Margaret as a subject.

In Double Margaret, she splits the canvas into two depictions, duplicating the image in alternate hues and decoration. In the top half of the canvas, Margaret is surrounded by a burst of seashell scraps whilst the lower-half is opposingly muted. Exploring contrast and duality, Weatherford uses physical natural elements to develop pre-existing themes, marking her works firmly in real objects and people.

Despite the ongoing incorporation of the natural into her work, Weatherford increasingly felt a desire to be closer to it. Inspired by the likes of Hodler and Courbet, she began practicing plein-air at Pismo Beach. Situated a few hours north of LA, Weatherford would draw the beach's sea caves in the changing Californian sunlight. After drawing from life, she would then take the sketches back to her studio to turn into paintings. Consequently the shapes of the rocks were stylized, emphasizing the form and contrasts.

Whilst the sea cave series differ to Weatherford's previous works, her themes and strength of color remain prevalent. Developing her practice and pre-existing themes, such as interiors, exteriors, hidden perspectives and the natural world, she also filters in new elements. In the pivotal series, Weatherford's changing relationship with light is apparent, as it begins to play a key role in the production and accents of her work.

When driving through Bakersfield in 2012, Weatherford was captivated by its distinctive lights. Honky-tonk bars, cafes, take-out joints and motels were marked by bright LED signs glowing against the night sky. Prior to this, Weatherford had accepted a visiting artist opportunity through California State University, resulting in a show. Wanting the works to embody a sense of place, Bakersfield's lights were certainly the perfect inspiration for the project. Recreating specific places and moments, Weatherford primarily painted from memory, using vivid Flasche paint and gestural brush strokes on a large-scale canvas to channel her experience. Lastly, she added bent neon tubes to signify a sense of time, place and atmosphere.

Since The Bakersfield Project, Weatherford has continued to see neon lights as evocative of city life, with later series finding inspiration in Manhattan and Coney Island. As recent commercial shows have proven, Weatherford is a noteworthy artist of our time who channels the world around her through a unique language of color, personal experience and light. Above all, her artistic journey shows she is just getting started, as her works only get bigger, better and brighter.

You can catch Mary Weatherford in Gagosian's Artist Spotlight series until 23 June!

Also, find the exhibition checklist, an audio slideshow of the show's opening and the ''Weatherford's Women'' playlist on Tang's Canyon-Daisy-Eden webpage.

Did you like the article? Learn more about contemporary women artists by reading: