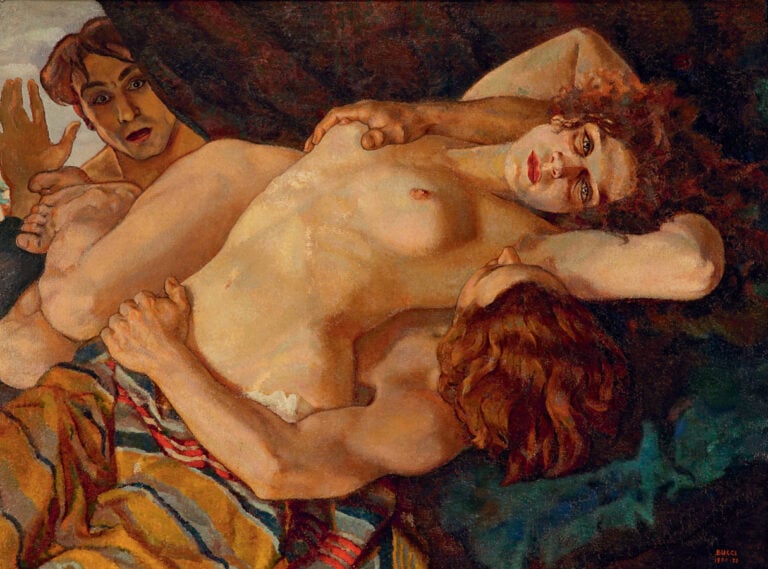 Margherita Sarfatti: Segni, colori e luci in Museo del Novecento in Milan is an exhibition devoted to the life of one of the most influential female figures in the history of the 20th-century Italian art. With the exhibition’s immersive layout, not only can we discover the complex personality of Sarfatti, but also explore Milan’s artistic and social scene of the interwar period.

We enter the exhibition walking through a tunnel which walls are covered with pictures of Margherita. At its end we find a timeline ranging from 1880 to 1961 which is an introduction to her life pointing out the most important events at personal, professional, political, and historical level.

Margherita Sarfatti was a writer, journalist, art critic and promoter of Italian culture and art abroad through exhibitions and conferences, an activity that made her became one of the key figures of Italian cultural environment.

After presenting us this enterprising, ambitious, and extraordinarily cultured woman, the exhibition takes us to Milan at the beginning of the century, an open city which at that time was buzzing with energy and such extraordinary personalities like a feminist Anna Kuliscioff and a politician Angelica Balabanoff, as well as artists capable of intercepting poverty and loneliness to begin the process of change.

Since the city was central to the political developments and many institutions had there their headquarters, it became a perfect location for the new cultural elite, composed of journalists, intellectuals, philanthropists, politicians that facilitated the dispersal of press which affected the cultural and artistic debate of the time.

Through the work of important artists like Arnoldo Bonzaghi, Umberto Boccioni, and Carlo Carrà, we discover Milan to be the most dynamic city in Italy of the time. In the midst of an industrial, commercial, and financial blossoming that launched the city into the future, it functioned also as an extremely lively laboratory for ideas surrounding the social and cultural emancipation of a working class.

The birth of the Novecento Movement

The exhibition recounts the actions of Sarfatti in the art galleries she attends, in the exhibitions she prepares and in the artists she discovers, and then unveils her extraordinary ability to build the cultural apparatus on a political platform, with the awareness that the culture and art are, like politics, the product of a historical process and, in any case, culture is not an expression of a political thought and hence should not be subordinate to it. Here lie intelligence and modernity of Sarfatti.

At the end of the 1920s she, in fact, consolidates the importance of the generation of artists who were part of the Novecento Italiano group, which invigorated Milan’s rather sleepy art scene dominated by the Divisionists. In 1925, Margherita Sarfatti wrote in the book Segni, colori e luci: “to find pure wine in the new currents one must search for it among some of the members of the group of  Novecento painters”.

She shaped the taste of her era not only through articles, essays, or events but also making public purchases and commissions related to the new architectural image of the city, whose history is reconstructed by the exhibition at the Museum of the Twentieth Century (Museo del Novecento). It creates a path that intersects the personal and cultural life of Sarfatti with the works of artists of her time, especially with those she loved the most, like Sironi, Funi, and Wildt, but also with archival documents and images.

This is the period in which we begin to outline a modern “art system” that involves critics, gallery owners, artists, and merchants. Contemporary art exhibitions gain the attention of the bourgeois public, the basis of a growing art market. Critics and journalists often sign articles dedicated to the Milanese galleries and write the introductions to the catalogues that accompany the exhibitions.

Art in times of war

The last part of the exhibition opens with a view on a sepulchral white bust of Mussolini made by Adolfo Wildt in 1928. It’s a unique piece which differs from many other such renderings in that it is not a simple bust but rather a mask made of Carrara marble. It was commissioned by Sarfatti to adorn the Casa del Fascio and in this dark room, it perfectly renders the atmosphere of the Fascist period.

The Futurists were ardently in favor of joining the war, and many of them voluntarily enrolled. After the WW1, Sarfatti’s relationship with Fascism grew stronger and in 1922 together with Mussolini she founded a monthly publication of the Gerarchia movement, and she became the magazine’s director. In 1925, after publishing “The life of Mussolini”, Sarfatti was at the height of her national and international success. Yet, since for her art was never supposed to be at the service of politics, her influential position on the Italian art scene began to weaken in the late 1920s, followed by the deterioration of her relationship with the Dux and ended with her being removed from the directorial role.

Her decline reached the lowest point with the passing of the racial laws in 1938. Sarfatti left Italy, moving first to Paris and then to Uruguay in 1939. She returned to Italy in 1947, only to find a context that had changed radically and that was totally unfamiliar to her.

The exhibition presents 90 works by the protagonists of the Novecento Italiano art movement, the paintings and sculptures by 40 artists, including Boccioni, Borra, Bucci, de Chirico, Dudreville, Funi, Malerba, Sironi and Wildt, which are contextualized by film clips and photographs, letters, invitations to vernissages, books from the period, and even clothes, glass and furnishings. It is a narrative of a complex historical period and a precious glimpse into Milan of the first two decades of the 20th century.

Visit the exhibition at the Museo del Novecento in Milan until February 24.