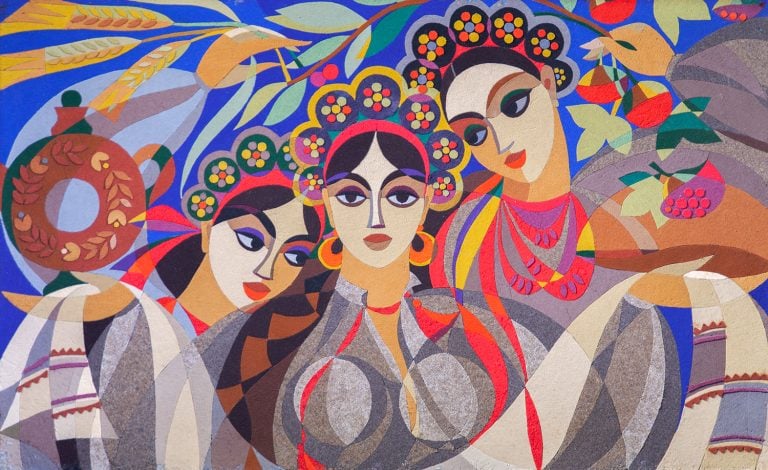 Lyubov Panchenko (1938-2022) was a revolutionary folk artist who overcame a lifetime of obstacles in pursuit of her work. It began when she enrolled in art school against her family’s wishes and culminated when she died on 30 April 2022, weeks into a hunger strike in protest of Russia’s violent invasion of Ukraine.

Decades of creative output and political activism characterized Panchenko’s life from beginning to end. Today, her vibrant folk art lives on after her death. Her charming collages look to the past and towards a brighter future, celebrating the rich culture and perseverance of Ukraine.

How Lyubov Panchenko Became an Artist

In 1938, Lyubov Panchenko was born in Bucha, back then a small village near Ukraine’s capital of Kyiv (now a city in the Kyiv Oblast where the infamous massacre took place a few months ago). Her parents discouraged her childhood interest in art, often punishing her just for picking up a drawing pencil. However, Panchenko was not deterred. She painstakingly put herself through art school without her family’s support, graduating from the Kyiv School of Applied Arts with a degree in embroidery.

Early on, Lyubov Panchenko found work as a tailor and later as a fashion designer. She also mastered drawing, watercolor, and linocut techniques. Her signature collage style emerged as a result of her her multifaceted skillset and passion for Ukrainian culture. Panchenko pieced together cut pieces of brightly-colored clothing textiles to create delightfully decorative compositions. She typically incorporated overtly nationalistic symbols and other elements of Ukrainian folk art in her work.

Subversion in the Sixties

The Soviet Union’s totalitarian rule over Ukraine stymied the creativity of young artists in Kyiv, including Lyubov Panchenko. For much of her career, the Soviet government censored Ukrainian art in favor of Russian Socialist Realism. Due to her devotion to colorful Ukrainian folk art and brash anti-Soviet activism, she was forbidden to exhibit her art for decades.

To make ends meet, Panchenko published decorative embroidery patterns in magazines for women and pursued a career in the fashion industry. Then, by the 1960s, an important cultural shift began in Ukraine – and Panchenko was determined to play a part in it as an artist.

The Soviet Union slowly relaxed censorship of Ukrainian voices in the 1960s. A group of creatives aptly called The Sixtiers emerged and embraced the opportunity to fight back against the Russification of Ukraine’s national culture. As a Sixtier, Lyubov Panchenko asserted her national identity through folk art.

Before Ukraine regained its independence in 1991, Panchenko received little positive recognition for her work. The Soviet Union maintained an oppressive hold not just on Ukraine’s sovereignty as a nation, but on Ukrainian art and culture as well.

Each of Lyubov Panchenko’s collages is an unabashed celebration of Ukrainian culture. This is why, during Soviet occupation, Panchenko’s masterfully made and seemingly unthreatening art never entered the spotlight.

After the collapse of the Soviet Union, Lyubov Panchenko was finally given opportunities to exhibit her Ukrainian folk art collages. She showcased her work in prestigious solo exhibitions and permanent museum collections. Additionally, the Museum of the Sixtiers in Kyiv opened to celebrate Panchenko and her revolutionary contemporaries.

Panchenko’s artistic and political momentum was in full force until the end of her life. When Russian forces advanced on her hometown of Bucha, she began a hunger strike in protest. Starvation and isolation contributed to her death on 30 April 2022.

Lyubov Panchenko demonstrated the revolutionary power of art throughout 84 years of her life. Perhaps she would have found earlier success as an artist if not for Soviet censorship. She would likely still be crafting collages in her Bucha studio today if not for the latest Russian invasion.

Ukrainians and folk art appreciators everywhere are determined to celebrate Lyubov Panchenko’s revolutionary legacy – both as an influential artist and a fierce defender of Ukrainian culture against violent opposition.

An American art writer in Amsterdam who loves knitting, her calico cat, and everything Victorian.