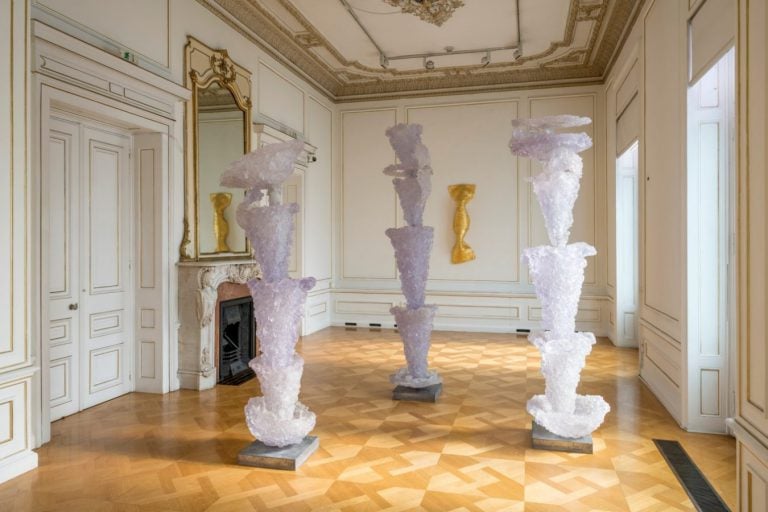 View of Lynda Benglis’ exhibition ‘In the Realm of Senses’ at Museum of Cycladic Art. Author’s photo.

Post-Minimalism refers to all art practices that came out in the late 1960s. It embraces Body Art, Performance Art, Process Art, and aspects of Conceptual Art. Artists create sculptures that have nothing to do with the traditional ones. For example, they are abstract, and they have a strong material presence. This is the case of Lynda Benglis, an artist who found new methods to create beautiful sculptures and who made a strong statement as a feminist in art history.

Benglis (b. in 1941, Lake Charles, Louisiana) was the first artist to make sculptures out of paint, removing the barrier between traditional painting and sculpting. Her work continues in the footsteps of Abstract Expressionism, that is, dripping and pouring pigment from above. She doesn’t use a canvas, but she pours the color directly onto the floor. In this way, she allows the walls and corners to shape the sculpture.

Moreover, Benglis used (and still does) candy colors, glitter, and other craft materials, as a means to separate herself from the “serious” colors and macho materials used by her contemporaries back in the day. This was her way to make her statement. She wanted to question the traditional gendered distinctions in art.

Benglis began with painting. She first used pigmented beeswax and dammar resin, using a blowtorch as a brush. In that way, she created something like a marble-esque surface that fought against the limitations of masonite panels. However, she wanted to see how these forms would flow beyond the traditional canvas or wood panel. So, she started using pigmented latex, which she poured directly onto the floor.

Her first work of this technique was the Fallen Painting. Benglis poured latex rubber pigment onto the floor of her studio. The rubber remained in the shape of her pour and preserved her gesture. It was like a choreography that balanced spontaneity and precision, as Susan Richmond pointed out. Furthermore, the process required physical endurance, as sometimes the artist had to move around five-gallon cans of the pigmented medium. In any case, the original Fallen Painting and the ones that followed are actually sculptures and are meant to be exhibited on the floor. This whole technique resembles Jackson Pollock‘s process.

While working with latex, Benglis also started working with pigmented polyurethane foam. The foam helped her build the volume of her sculptures. Namely, the foams, which resembled lava, mounted walls, corners, or various constructions, and solidified. The sculptures were also constituted of wire mesh, cotton bunting, and plaster. In 1972, Benglis began to tie them into knots. Eventually, these knots became more complicated. Specifically, the new metallic and sparkly colors, vaporized aluminum, copper, zinc, tin, and other elements created reflective surfaces and brought together the object with space. Thus, the artist gave birth to the bodily shapes that would turn into gold sculptures in the early 1980s.

Benglis made a series inspired by the Greek alphabet. One of these is Psi, a sculptural knot made by various materials. Its shape reminds one of human organs, maybe intestines. It is a self-referential work. No, it doesn’t refer to the artist’s intestines. Basically, it is a consideration of the gendered perspective, along with the glitter. It aims to pose a question to the viewer on why they gender the art materials.

However, Benglis didn’t settle only for sculpture. She took the new media of the decade, that is video art, in order to make artistic statements about feminism. She sought to undermine gender stereotypes and discriminations against women artists within the male-dominated artistic circles. So, her videos are all about narcissism, sexuality, and gender identity.

Now (1973) is her most famous video. It shows the artists in front of a monitor, watching another recorded version of herself. There is also an additional voiceover of the artist. During the video, the artist’s three versions shout instructions and questions, such as: “Now!”, “Now?”, “Start recording”, “Do you wish to direct me?”. Self-eroticism is obvious. At some point, she French-kisses her double in the monitor.

A place in the Post-Minimalism movement

It is hard to actually classify Lynda Benglis because over the years she has embraced many techniques and media for her art. However, one thing is certain. Even though she is considered a Post-Minimalist artist, she has created a distance between her and her pure Minimalist and Post-Minimalist contemporaries. That is due to her use of flowing forms, color, glitter, “lustful” surfaces, that are far from the more achromatic focus of her fellow artists.