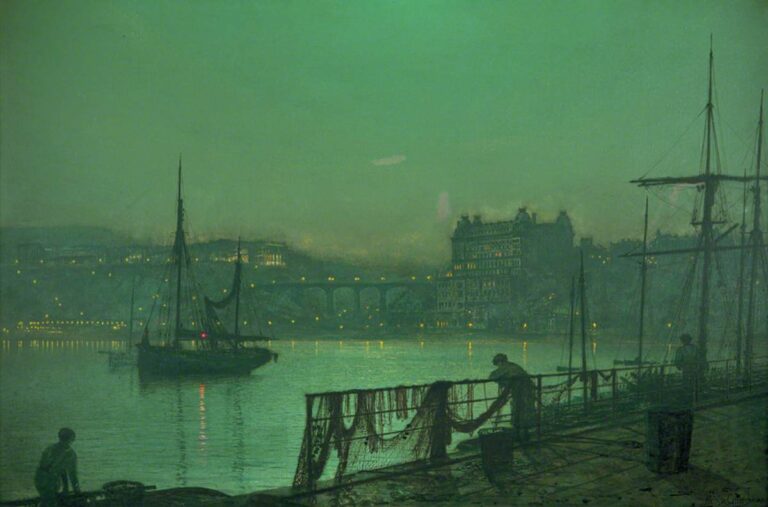 John Atkinson Grimshaw (1836-1893) was a Victorian painter admired for his beautiful evening landscapes. British cities like London, Liverpool, and Leeds were his favorite subjects. Grimshaw’s landscapes are celebrated today, as they were in his own day, for their stunning use of atmospheric effects like twilight, fog, rain, and gaslight. They cast British cities, waterways, docks, and landscapes in the warm, lovely, and romantic light.

Grimshaw had the ambition to paint from childhood, but his family discouraged him from pursuing it. Eventually, though, he left his job as a clerk to become a full-time artist anyway. Grimshaw was very prolific, and that was largely because he was almost always in debt. He was fortunate that there was a big market for his work, so he painted pictures as fast as possible to keep the money coming in.

The interesting thing is that he came up with a bunch of time and money-saving techniques to paint as quickly as possible, and some of these actually contributed to the style he’s so well loved for. For example, some of the atmospheric effects in Grimshaw’s landscapes may partially be the result of his using very thin layers of paint to save money. It’s also known that occasionally painted on top of photographs, which definitely saved time but isn’t really obvious in the finished works.

James Abbott McNeill Whistler was very impressed by Grimshaw’s landscapes, saying I considered myself the inventor of nocturnes until I saw Grimmy’s moonlit pictures. While twilight clearly features in many of his paintings, other effects such as moonlight, rain, fog, mist, and gas lamps, equally contribute to their lovely mood. Grimshaw combined atmosphere with realistic detail to great result. Interestingly, he had no formal training, so he had to teach himself to create all these effects.

Grimshaw’s pictures are beautiful and romantic, even when they depict ordinary or less-than-glamorous subjects. They tend towards a slight tone of isolation that is somehow still inviting. The human presence in his works, when there’s one at all, is clearly secondary to the landscape or city. You rarely see a human face or personality in Grimshaw’s landscapes. I think that might be a big part of what makes his work so attractive to people. It gives a sense of timelessness that I don’t think would be as strong if the people were more prevalent. Personally, I find that in scenes like the one below, the places Grimshaw painted suddenly seem like places I’d like to be.