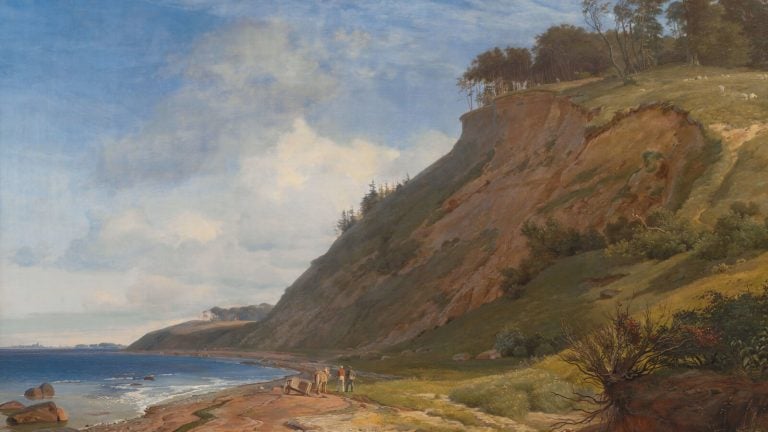 View from Kitnæs on Roskilde Fjord by Johan Thomas Lundbye is a masterpiece of 19th century Danish landscape painting. It set a new standard for the genre with its monumental scale and anecdotal details.

In the 1830s and 1840s, Europe was embroiled in conflicts over national identity and government rights. Revolutions and political upheavals marked the European landscape as monarchies were overthrown, nation-states were established, and nationalism was upsurging. It was during this civic turmoil that Johan Thomas Lundbye (1818-1848) painted his nationalistic themed View from Kitnæs on Roskilde Fjord by capturing the distinctive Danish landscape as a symbol of Danish identity.

The painting is a monumental image of a Danish landscape. It measures 1.89 meters (6.18 feet) high by 2.56 meters (8.38 feet) wide. The right canvas is dominated by Roskilde Fjord as it plunges into the azure waters of Tørslev Hage. The left canvas is dominated by a sapphire blue sky spotted by creamy white clouds. The sky establishes a brilliant background contrasting with the matte rocky foreground. Two people, a horse, and a broken cart stand in the midground. Their diminutive size confirms the large scale of the landscape and the majesty of the Danish coast.

In the right foreground are several local shrubs growing on a rocky outcrop. On the outcrop’s left edge clings a bush speckled with green and red leaves. It precariously grasps the boulder as many of its roots dangle in the open air. This is a bush hanging on the edge of life and dramatically energizes the bottom right corner of the painting.

In the left foreground are several boulders in the water and upon the shoreline. They add a left visual balance to the right outcrop. However, unlike the terrestrial outcrop, the marine boulders are smooth, polished, and gleam in the sun. Johan Thomas Lundbye masterfully paints their shadows and highlights with expert skill to imply their solid mass against the liquid water.

Centrally in the foreground is a small gathering of two people, one horse, and one cart. The cart has a missing wheel that has broken from the cart’s axle and lays on the ground. The horse was pulling the once-functional cart, but the horse now stands stationary awaiting instructions. A man in an orange shirt holds the reins to the horse. His back is to the viewer as he gazes towards the cowherd on the far shoreline. Perhaps this was his intended destination? A second man stands in profile with a green cap and a jacket. He seems to be talking to the first man, but he does not offer any immediate assistance. He is merely an annoying commentator of the situation.

The left midground is dominated by the beautiful blue water of Tørslev Hage. Waves crested in white foam lick the shoreline and add foamy interest to the otherwise placid surface. Two boulders delicately rise above the waves. They add a sense of linear perspective to the landscape with their smaller size compared to the larger boulders in the foreground.

Dominating two-thirds of the painting is Roskilde Fjord. Like a giant tsunami wave, it rises in a sharp profile with a steep cliff face. Its wave-like crest peaks with a forest of firs, oaks, and pines. A soft green meadow blankets the fjord’s crest while a dozen sheep stand, sit, and graze on the grasses. The fjord’s summit is a serene vignette of Danish country life that considerably contrasts with the barren fjord’s face. It dramatically cascades from the bucolic motif downwards to the sea. The drop magnificently covers hundreds of feet and, if fallen, would be deadly.

Contrasting against the fjord’s terrestrial bulk is the sky’s celestial delicacy. It is veined with white cotton clouds and grey silky threads. A single grey patch lingers over the scene, suggesting an isolated scattered shower in the making. The sky’s variegated texture complements the terrain’s mottled texture and adds interest to the composition. The sky feels to have volume and character and not some spaceless void of blue.

Johan Thomas Lundbye was 25 years old when he painted View from Kitnæs on Roskilde Fjord. It was instantly recognized by the artistic community as a triumph due to its monumental scale and proficient polish for a Danish landscape which was unusual at the time. Therefore, the painting set a new standard for the grandeur of Danish landscape painting. View from Kitnæs on Roskilde Fjord truly captures the spirit of the Danish coastline and its people. It is serene and spectacular. It is considerable and consequential. It is a masterpiece.