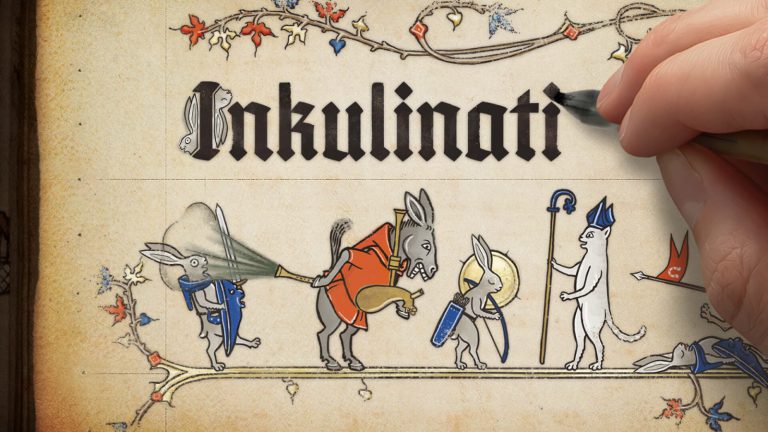 If you’ve ever wanted to step inside a medieval manuscript, here’s your chance. Inkulinati, an incoming strategy-based video game, was inspired by the weird and wonderful world of marginalia.

Throughout medieval manuscripts, all sorts of strange things often populate the margins – people and animals behaving oddly, fantastical hybrid creatures, and more. This marginalia can be charming, amusing, or even surprisingly obscene. (Inkulinati confines itself merely to the quirky and comically rude.) Although they inhabit Christian texts, they have no discernible religious associations and can seem downright profane. Marginalia’s function and meaning are still uncertain today, despite generations of scholarly debate.

An “Ancient Ritual” of Ink Masters

Inkulinati proposes its own imaginative interpretation of medieval marginalia. According to the game, these images are remnants of secret ritual battles between “Ink Masters”, special medieval illuminators who use “Living Ink” to create creatures that come to life and do battle.

The game will allow players to step into the role of Ink Master, then draw into existence armies consisting of dogs, rabbits, dragons, snails, and more. Each creature has its own weapons and powers useful for defeating the opposing army. After designing their own avatars, players will battle the creature armies of notable medieval figures like Hildegarde of Bingen, supposedly a secret Ink Master.

Because Inkulinati has yet to be released, I was unable to actually play the game or fully understand its rules. However, I did get an idea of it through a series of pre-release videos on YouTube. Based on that promotional material, Inkulinati’s visuals look really wonderful, with vivid colors, clear illustrations, and charming figures full of personality. The avatars, creatures, and overall setting appear in a style clearly indebted to the medieval source material, while also feeling fresh and modern. I particularly appreciate the attractive foliate border like that so common in Gothic manuscripts. In a nice homage to medieval books, each action generates a textual narrative in the upper portion of the screen.

Inkulinati, the debut production of the Poland-based Yaza Games, will (hopefully!) launch this winter and we cannot wait to play it! Find out more on the company’s website and YouTube channel.