Roll up, Roll up, for the Greatest Show on Earth! Jeanne Mount and Her Circus Mosaics 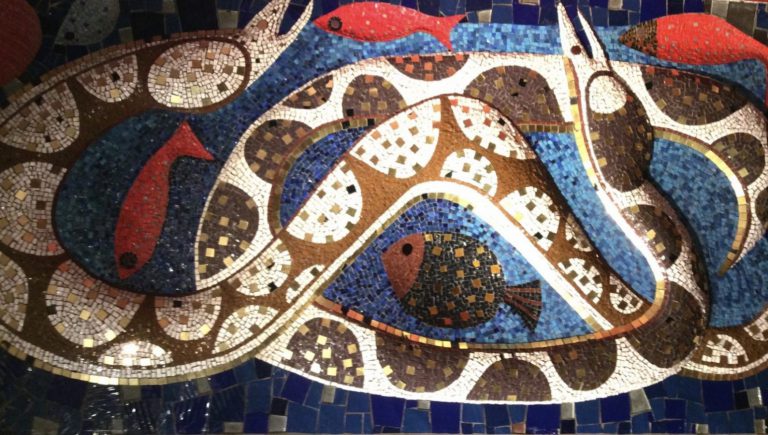 Artist Jeanne Mount designed a series of spectacular circus mosaics in 1969 that are as fresh and vibrant today as when they were first displayed on the famous Blackpool Tower. Let’s take a look.

Come back with me to the technicolor swinging sixties! You would have heard of Biba and the Beatles, pop art and psychedelia. But what you might not know is that there was a brief period of mosaic revival in 1960s Britain.

And one of the finest examples of British mosaic from this period is the Circus series by Jeanne Mount. No, you won’t have heard of her. However progressive we think the 1960’s was, women artists were still working in the shadows while their male counterparts had their moment in the sun with the critics, collectors and galleries.

We don’t know a lot about the early life of Jeanne Mount (maiden name Jeanne Martin), but she met the British sculptor Paul Mount at the Royal College of Art and they married in 1946. They settled in Cornwall and had two children.

Was Jeanne Mount over-shadowed by her husband’s work? We don’t know enough about their relationship to make a judgement call on that. What we can say is that her work is both appealing and imaginative, and that she really deserves better recognition. So, let’s take a look.

Jeanne Mount made the Circus Mosaics in 1969. This was a husband and wife project, where Paul’s skills as a sculptor complemented Jeanne’s mosaic work and their combined skills allowed this amazing commission to be realized.

Eleven mosaics depict the colorful acts from the Tower Circus in Blackpool, a popular seaside town in England. There are snakes, lions, seals, monkeys, and parrots. In addition, the circus horses, ringmaster, clowns, jugglers and acrobats are all created in bas-relief.

All of the mosaics rejoice in the vibrant, high energy experience of the circus. They really ‘pop’ both visually and physically. You can almost smell the greasepaint! The mosaics are now housed in the stairwell of Blackpool Tower, possibly moved to protect them from the salt air, vandalism or theft. They were originally on the exterior of the Tower facing the sea. As a young child, I was taken to see the Blackpool Tower circus for my birthday each year, and these mosaics prepared us for the wild events within.

The mosaics are designed to harmonize as one unit, drafted in a Cubist style. Each image is an oblong plaque, as tall as a person and uses the favored Arts and Crafts technique of peppering. This is the art of creating the background tiling which flows (andamento) around the object, but is dappled with a different / contrasting colour to create a little more interest.

It is quite rare to find mosaics that are two-dimensional with elements of both convex and concave shapes. To create these extraordinary pieces, I suspect tesserae (the name for pieces of tile) would have been set into prepared clay domes on relief and upside down. We call this the indirect method. The back is cast in to a solid form. It is possible that a mold was cast in order to return it to the right side up. The clay would then be removed and the tiles grouted between the gaps.

Mosaics have the unique trait of shimmering as you move past them, as the light catches the different facets of the tiles. The Circus mosaic tiles are made from Italian smalti glass tesserae; this makes them sparkle as you move past them – the animals almost wink at you!  Jeanne also spangled her mosaics with gold tesserae. These are real gold leaf locked between sheets of glass. The technique of creating Venetian smalti is a closely guarded secret. For an insight into the fascinating history of smalti, see the article Mesmerizing Mosaics.

Look at the clown’s hands: they are beautifully designed and set within a spiral. Is he a little creepy? Steven King’s Pennywise from the 1990s springs to mind, nothing like the mischievous clown Charlie Cairoli, whom I loved as a child. If one name is synonymous with clowning, it is Cairoli. He was an Italian/English performer and musician, a true circus legend. I am sure it is the strip over one eye that gives the clown mosaic that sinister effect. The clown juggles balls that have been made within a convex shape, giving the mosaic a 3-D illusion.

The monkey is delightfully cheeky! The mosaic has a great tonal contrast and Jeanne Mount has really got a feel for the creature. It is particularly difficult to create a design that fits this format and has a wide range of tonal range. He sits, arms crossed, ready to confront you; you feel that he is scheming up some mischief.

Jeanne Mount used standard tiles to complement the smalti and it is this technique of varying the actual size of the tesserae, along with the contoured forms that make these pieces so successful. The acrobats are also particularly exciting, their lithe bodies dangling from their trapeze with sphere cubist heads; leotards spangled with gold peppering give a spandex effect. Although of course spandex was not invented then!

The snakes, seen in our headline image above, are intertwined with each other, brown and white spots, like no snake I have seen, with curved sinewy bodies, scaly and cool to the touch.

The feather-plumed circus horses majestically performing, with their raised front legs, are created like a decoupage, trotting in formation.

Blackpool Tower recently celebrated its 125 year birthday, as the circus opened in 1894. It was inspired by the Eiffel Tower in Paris, France. The circus ring at Blackpool is one of only three in the world that is flooded at the end of the performance to allow synchronized swimmers to cavort in the 42,000 gallons of water, 4ft 6” deep, wearing feathered plumes on their heads. It was an extraordinary sight. The circus is situated in the basement between the four legs of the tower and has a Moorish style interior in sumptuous reds and gold, designed by Frank Matcham in 1899. The circus animals were removed in the 1990s but underneath the circus ring the cages and enclosures used for the animals are still there. It wasn’t all bad for the animals though, the elephants were exercised on the beach daily and caused quite a local stir.

Other works completed by Jeanne Mount for Blackpool were on the Golden Mile (now destroyed) and one is still in situ in a bank on Corporation Street.

Examples of Jeanne Mount’s work are also held in the Victoria and Albert Museum in London. But these are not mosaics – instead they are her embroidery cloth books created for the Needlework Development Scheme in the 1950s to raise the standard of needlework in schools in Scotland.

Jeanne divorced, outlived her husband, and died in 2016, leaving a son and a daughter. If anyone knows more about Jeanne and her work, or knows of the whereabouts of her children, I would love to chat to you! Meanwhile, immerse yourself in the exuberant circus scenes of the wonderful Jeanne Mount!

Alison lives in coastal mid Wales and works for Aberystwyth University. She was trained in three-dimensional design and has spent most of her career working as an educator and is heavily involved in curriculum development. She teaches painting, gives heritage walks and tours of mosaics in her home town, and teaches mosaics as well as undertaking commissions. Her Facebook site posts weekly blogs on mosaic history and mosaic techniques.