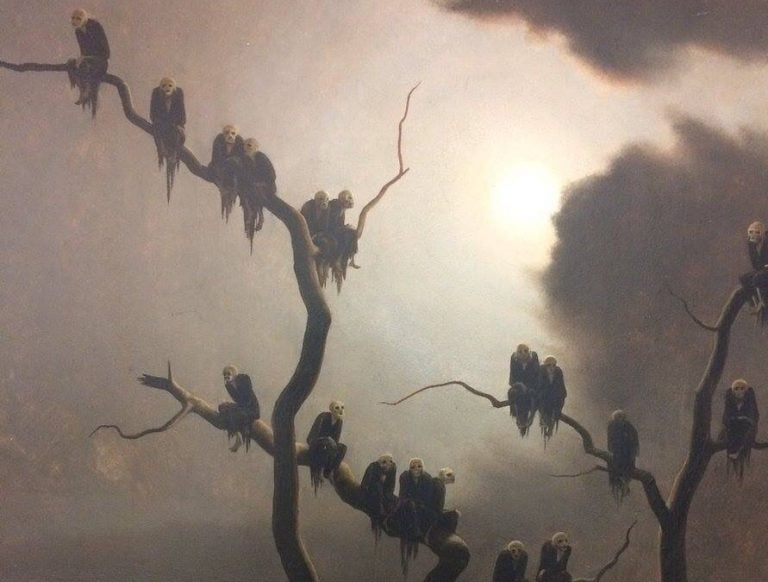 Franz Sedlacek is one of the most important Austrian painters of the interwar period. His paintings portray the darkness, oppressiveness, and disturbing states of mind of the frightening 1930s. He fought in both World Wars and lived through the entire transition of the interwar era. A well-educated man, Franz Sedlacek never stopped painting the reality surrounding him. However, his end remains a mystery to this day, as he vanished without a trace during the Nazi regime. His eerie paintings survived as witnesses of the disturbing times.

He was born in 1891, in Breslau (today Wrocław, Poland). Back then, the city of Breslau was part of the German Empire. A few years later, in 1897, his family moved to Linz. Sedlacek was talented even from a young age. During his adolescent years, he was already drawing caricatures and expressing his artistic talent.

In 1910, Franz Sedlacek moved to Vienna to study architecture, but he switched to chemistry one year later. At the same time, he never stopped drawing. Two years later, in 1912, the artist participated in his first-ever exhibition in Linz. His chemistry studies were interrupted by World War I. During the war, Sedlacek fought at Galicia and the Isonzo front.

After the war, Sedlacek returned to the university to finish his chemistry studies. He started working at the Technical Museum in Vienna, where he later became head of the Chemical Industry department.

Franz Sedlacek did not go to an art university. Actually, he learned to paint by himself. He was so good at what he did that he quickly gained a reputation. He was one of the founders of MAERZ, an artistic association based in Linz, along with Anton Lutz, Klemens Brosch, Franz Bitzan, and Heinz Bitzan.

Before World War I, he painted with pencils and ink. After the war, he gradually moved to oil painting. In 1927, he became an active member of the Viennese Secession and regularly participated in the Secession’s exhibitions. Two years later, he took part in the show Neo-Romanticism and New Objectivity in Upper Austria. It was then that Franz Sedlacek met and became close friends with Herbert von Reyl-Hanisch.

Over the course of his life, Franz Sedlacek won many national and international awards. In 1930, his paintings were shown at MoMA, and in 1939 he became a member of Kunstlerhaus Wien.

His work is difficult to categorize, as the artist embraced elements of new objectivity, magical realism, Symbolism, and others. The environment in his paintings consists of large and bright windows in dark and distinct spaces. There are landscapes that switch from dreamy to nightmarish, utopia to dystopia, and isolated characters with monstrous features. All these elements were meant to showcase the catastrophic turn of events of the 1930s. We, as viewers, witness a shadowy world where supernatural beings take over the human world. These beings are nothing but the portrayal of the repressive situation of Austrian fascism.

In my work, I can say with colors what I think of my contemporaries without being sent to a concentration camp.

In 1939, Franz Sedlacek joined the Wehrmacht, where he became First Lieutenant and later Captain of Wehrmacht. Sedlacek was not a fascist in his life; however, his involvement with the Nazi regime raises questions. It is important to note that Wehrmacht was a conscript force and that in Germany many men of military age were forced to serve in it. His involvement with it remains ambiguous, and we cannot be absolutely sure where Franz Sedlacek stood. His life, joining the New Objectivity movement, and becoming a member of the Viennese Secession and Kunstlerhaus Wien do not conform with his actions in Wehrmacht.

As a member of the Nazi army, he fought in Stalingrad, Norway, and Poland in the battle of Torun Fortress. There he went missing. On February 1, 1945, there was an official declaration of his disappearance. Ever since, Franz Sedlacek disappeared completely from the face of the earth, with no record proving the slightest clue of his existence. No one knows if he became a captive or if he staged his disappearance to escape the Nazis. In 1972, he was pronounced dead, but with no sign of his body.

In Italy, the abstract art period between 1930 and 1970 is characterized by five innovative movements: geometric abstract art, Arte Informale, The...