Luxury and Mystery – The Row About Fabergé Imperial Easter Eggs 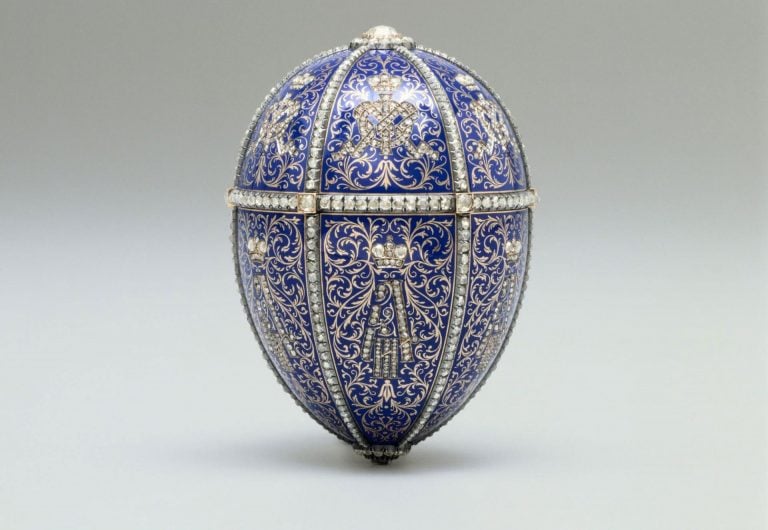 What You Need to Know About Fabergé Easter Eggs

There is something magical about the Fabergé Imperial Easter Eggs. They are a symbol of the ultimate luxury, but also of an era long gone and irretrievably lost. Physical items able to draw our minds back into the past, into a different world.

A Little Bit of History

Emperor Alexander III ordered the first Fabergé egg for his wife Maria Feodorovna in 1885. It is a touching gift; a luxurious object, with a surprise hidden inside, that has no other purpose than to bring delight. Funny and charming at the same time, and, for the jeweler, an opportunity to show off his craft. Maria Feodorovna liked the gift so much that she asked for another one in the following year and so the tradition was born. After Alexander’s III death Tsar Nicholas II ensured the tradition continued. However, as a devoted son and husband, he now ordered two eggs each year. This continued until 1917 when it ceased for obvious reasons. It is also broadly accepted that no eggs were made in 1904 and 1905 when Russia was at war with Japan.

Given the timeframe of 1885 to 1917 plus the fact that they were an Easter gift, it is inevitable that there is only a limited number of eggs. Hence the discovery of any new egg causes a sensation. But it also arouses endless suspicions.

Alexander Ivanov and His Collection

Ivanov is a Russian businessman, billionaire, oligarch, and art collector. Among other things, he collects Fabergé items. His most famous acquisition was the Rothschild egg in 2007, for £8.9 million. The interesting fact is that this egg had been specifically made for the imperial family. However, it had been in the Rothschild family since it was first purchased. It was one of the most expensive eggs that Fabergé had ever made and sold.

The bulk of Ivanov’s Fabergé collection is now the heart of the Fabergé Museum in Baden-Baden. This is also the source of the items Ruzhnikov questions.

An exhibition Fabergé, Jeweller to the Imperial Court was hosted in the State Hermitage Museum between November 2020 and March 2021. And only a few weeks after the opening its contents caused a major controversy. Andre Ruzhnikov in an open letter to the Hermitage director claimed that multiple objects in the exhibition were fakes. The main bone of contention was the so-called, “1904 Anniversary Easter Egg.”

I do recommend you to read Ruzhnikov’s letter to understand the basis on which he makes his argument. But I’ll do my best to summarize it here if you are pressed for time. Ruzhnikov focused on the “1904 Anniversary Easter Egg”, which you can see above. As mentioned previously, it is broadly agreed that no eggs were made in 1904. That is the first red flag. In addition, Ruzhnikov questioned the documents presented by Ivanov to support the egg’s provenance and finds them lacking.

The egg includes miniatures of the imperial family, which seem to be based on photos taken after 1904. This would throw the entire timeline off. In addition to that, this egg is similar to the 15th Anniversary Egg, which is unusual. Fabergé strived for originality and did not use any pattern more than once. Each egg was to be a unique gift. It did not offer the comfort of familiarity, but rather, gave the recipient a delightful surprise.

Other Eggs to Feast Your Eyes On

But do not fret; all is not lost. There are around 50 Imperial Easter Eggs with confirmed provenance around the world, and many more that Fabergé’s workshop produced. Some of them are in public collections, so while you might not be able to buy one there’s certainly a chance you will see one. You can find the full list of eggs with additional information here.

Just look at this! Such simplicity and yet such class. It is funny, it is beautiful, and it is totally and utterly useless. The perfect gift! The Hen Egg has an opaque white enameled outer “shell”, opening with a twist to reveal a first surprise – a matt yellow gold yolk. This in turn contains an enameled chased gold hen that once held a replica of the Imperial Crown with a precious ruby pendant egg within. The pendant by itself cost more than half of the egg’s total price. Unfortunately, both have been lost and are only known from an old photograph.

This was the first egg that Tsar Nicholas II gave his wife Alexandra Feodorovna. It is crafted from multi-colored gold, decorated with bands of rose-cut diamonds, and covered with a translucent, red guilloché enamel. The rosebud surprise is of an opaque yellow and green enamel. At its apex, the egg has a miniature portrait of the young Emperor under a table-cut diamond. Inside, they contained further surprises. A diamond-set crown and a ruby drop, are only known from an old photograph.

The eggs evolved with the fashion. This one is an example of the Art Nouveau style. The lily of the valley was the favorite flower of Empress Alexandra Feodorovna. This design was also in her preferred style. The surprise? When one of the pearls is twisted, the crown on top of the egg opens to reveal miniature portraits of Nicholas II and their two daughters, Tatiana and Olga.

Who said an egg cannot be a tree? This egg, presented by Emperor Nicholas II to his mother, Dowager Empress Maria Feodorovna, is inspired by a French 18th-century singing bird automaton. According to the Fabergé invoice, the bay tree comprises “325 nephrite leaves, 110 opalescent white enamel flowers, 25 diamonds, 20 rubies, 53 pearls, 219 rose-cut diamonds, and one large rose-cut diamond”. When the clockwork automation is wound up and set in motion, a feathered bird appears, flaps its wings, turns its head, opens its beak, and sings. The eggs were not only a triumph of jewelry but also crafty engineering.

As I mentioned, it was not only the Imperial family who ordered the famous Fabergé Imperial Easter Eggs. This one was commissioned by Dr. Emanuel Nobel, nephew of Alfred Nobel, of Nobel prize fame. Emanuel Nobel, one of the leading figures of the oil industry at the time, was amongst Fabergé’s most notable clients. The engraving on this platinum and translucent white enamel egg is of underglazed frost crystals. Its surprise is diamond-set platinum and rock crystal watch.

The Fabergé eggs are beautiful and silly at the same time. You may think of them as a sign of wasteful decadency. Or as a feast for the eye, showing the ultimate love of beauty over function. This approach has rarely been seen over the last century. It is even rarer now with the obsession with productivity, functionality, and speed. We seldom stop to be amazed.