People, Subways and Mystery – Early Rothko’s Paintings Will Surprise You

There is no doubt that when we think of Mark Rothko (1903 - 1970), we see his large, abstract canvases, which were representations of human feelings and the human drama. They were painted from 1950 to 1970 and brought eternal fame to the artist. But before becoming a legend, Rothko was looking for his place in the art world.

Early Rothko's surprising and unexpected works differ much from what we usually associate with the American artist. Despite everything, now when we look at them it's evident how Rothko, through all of his life, was an ardent worshipper of human feelings and how intensively he was looking for them in art - not only in his own art, but also in the art of the Old Masters.

"The real essence of the great portraiture of all time is the artist’s eternal interest in the human figure, character and emotions – in short, in the human drama. That Rembrandt expressed it by posing a sitter is irrelevant. We do not know the sitter but we are intensely aware of the drama." - Rothko on the Exhibition 'The Art of Rembrandt' (1942, Metropolitan Museum New York)

In 1923, Rothko gave up his studies at Yale University and moved to New York City. There he spent hours at the Metropolitan Museum of Art and attended classes at the Art Students League, briefly studying under American Cubist, Max Weber. In the late 1920s, he met the modernist painter Milton Avery, whose simplified and colorful depictions of domestic subjects had a profound influence on Rothko's early development. At this time, Rothko was particularly interested in Rembrandt’s work - his Self-portrait from the National Gallery of Art in Washington especially caught his eye and echoed in Rothko's self-portrait from 1936. [caption id="attachment_21049" align="alignnone" width="1000"] 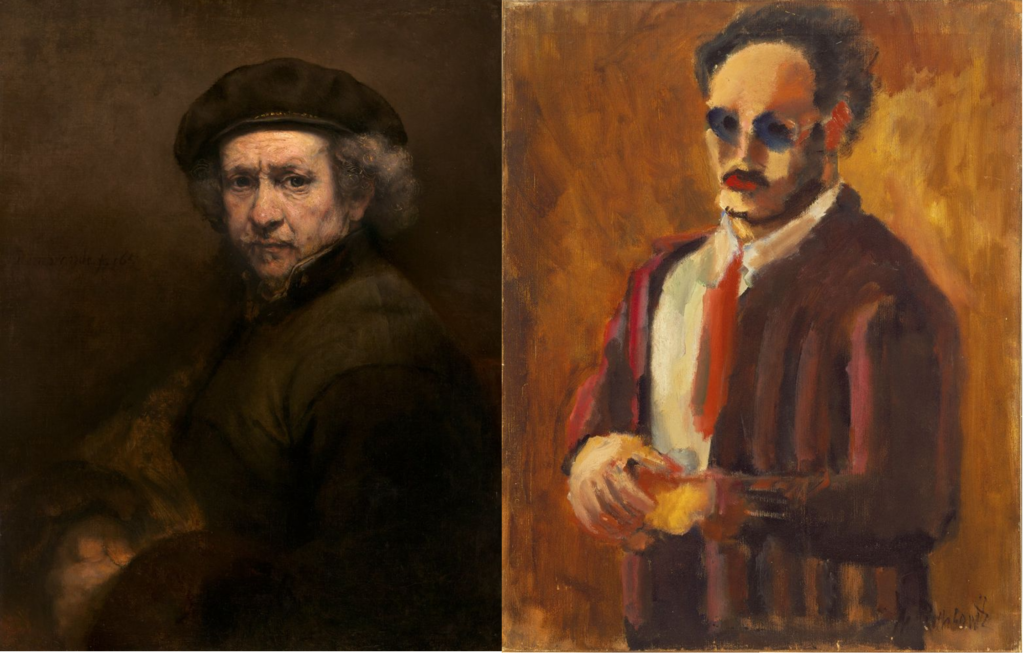 On the left: Rembrandt van Rijn, Self-Portrait, 1659 © National Gallery of Art, Washington, D.C., Andrew W. Mellon Collection. On the right: Mark Rothko, Self-Portrait, 1936 © 1998 Kate Rothko Prizel and Christopher Rothko/Bildrecht Wien, 2019[/caption] Rembrandt wasn't the only Old Master admired by the artist. Rothko first saw the original of Vermeer’s The Art of Painting in the 1950s. He worked on the basis of a reproduction citing the blue dress and the window by which the young woman stands. He altered the style, context, and pose, and simply modernized the subject. Rothko’s Mary holds her hand as though pregnant. The curtain, all the decorations, as well as the painter and his easel, vanish however. The space and the protagonist appear flat and abstracted. [caption id="attachment_21050" align="alignnone" width="1000"] 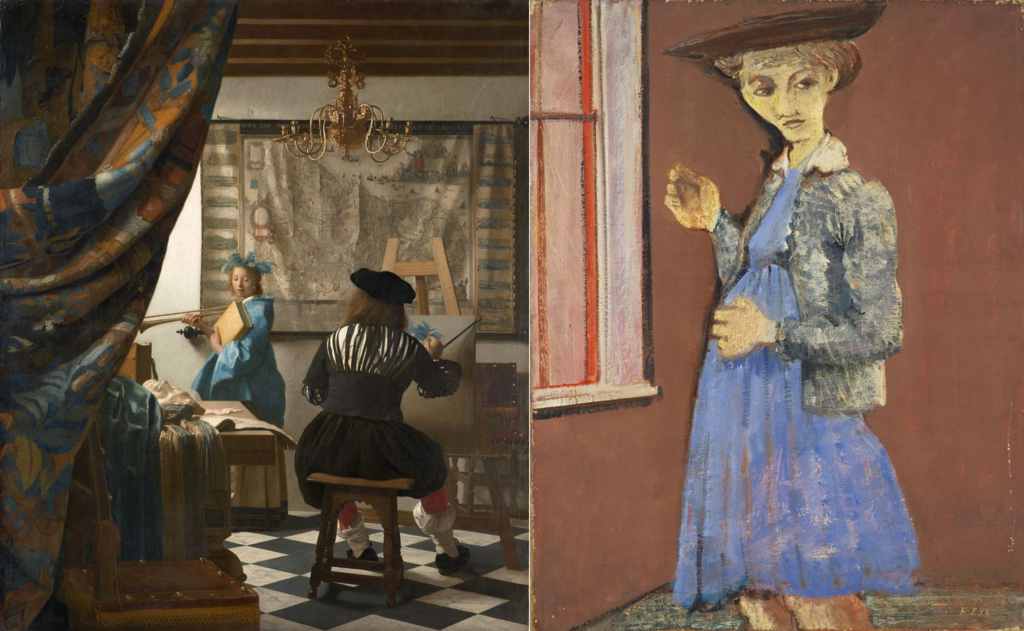 On the left: Johannes Vermeer van Delft, The Art of Painting, ca. 1666/68 Kunsthistorisches Museum Wien, on the right: Mark Rothko, Portrait of Mary, 1938/39 © 1998 Kate Rothko Prizel and Christopher Rothko/Bildrecht Wien, 2019[/caption] In 1929, Rothko began teaching children at the Center Academy of the Brooklyn Jewish Center, a position he retained for more than 20 years. Then Rothko painted mostly street scenes and interiors with figures. In his subway scenes, faceless passengers stand isolated on the platform, or descend the stairs against bold, empty backgrounds. [caption id="attachment_21051" align="alignnone" width="1000"] 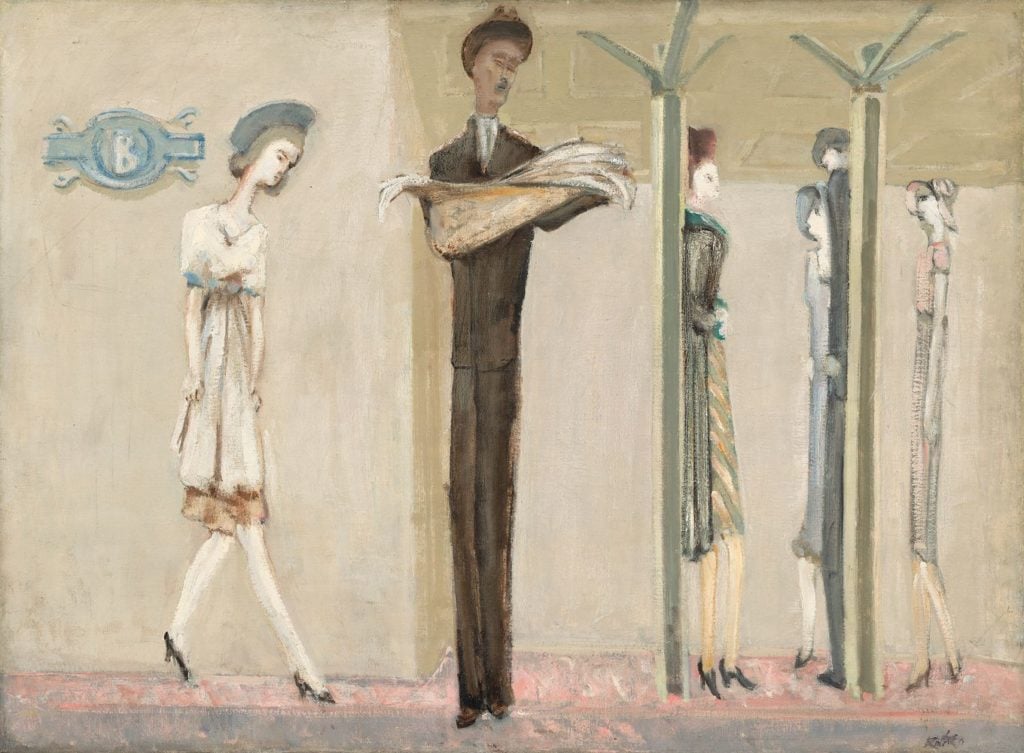 Mark Rothko, Underground Fantasy, 1940 © 1998 Kate Rothko Prizel and Christopher Rothko/Bildrecht Wien, 2019. Courtesy National Gallery of Art, Washington, D.C.[/caption] In the 1940s, perhaps because of what was happening in the world, Rothko shifted from scenes of real life to symbols and myths. Rothko felt that if art were to express the tragedy that pushed civilization to the edge, a new idiom had to be found. "It was with the utmost reluctance that I found the figure could not serve my purposes ... But a time came when none of us could use the figure without mutilating it," he said. The most crucial philosophical influence on Rothko in this period was Friedrich Nietzsche's The Birth of Tragedy (1872). Nietzsche claimed that Greek tragedy served to redeem man from the terrors of mortal life. The exploration of novel topics in modern art ceased to be Rothko's goal. From this time on, his art had the goal of relieving modern man's spiritual emptiness. He believed that this emptiness resulted partly from the lack of a mythology. [caption id="attachment_21052" align="alignnone" width="1000"] 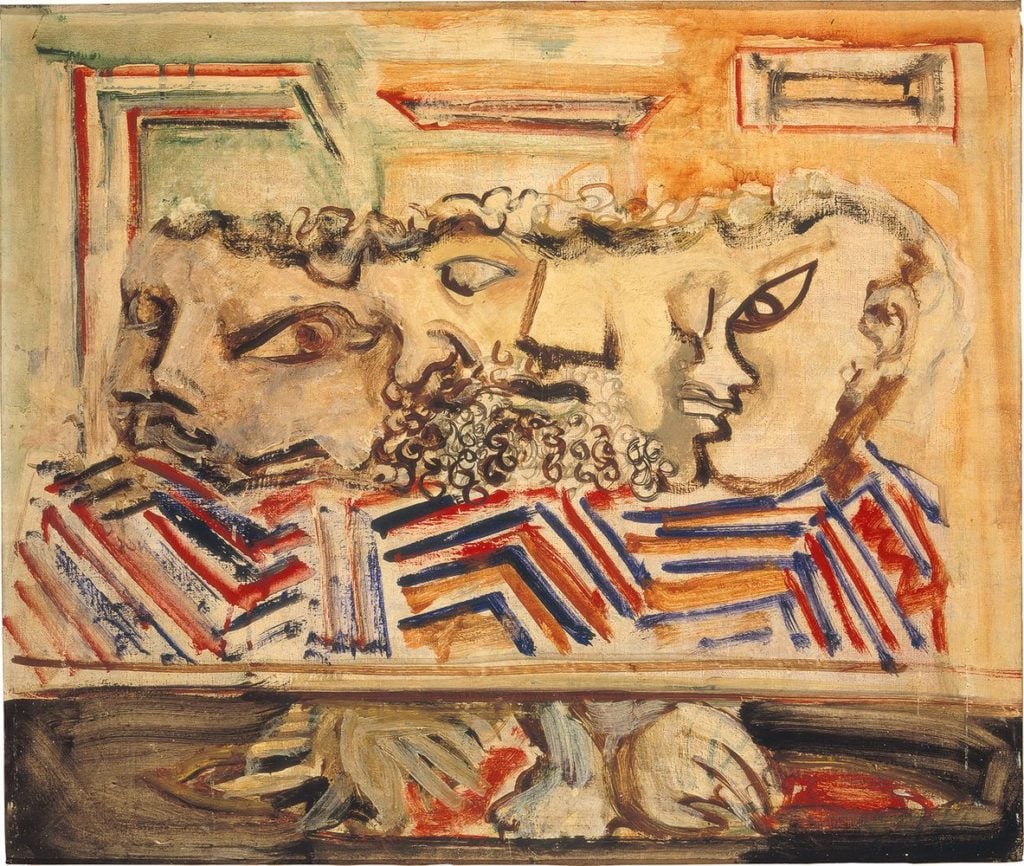 Mark Rothko, A Last Supper, 1941 © 1998 Kate Rothko Prizel and Christopher Rothko/Bildrecht Wien, 2019 © Collisart, LLC, New York[/caption] Rothko's pieces from 1946 to 1949 have been named by art critics as 'multiform' paintings. Rothko never used the term multiform himself, yet it is an accurate description of these paintings. The artist himself described these paintings as possessing a more organic structure, and as self-contained units of human expression. The blurred blocks of various colors contained a "breath of life" he found lacking in most figurative painting of the era. Writing in 1947, he described his paintings as 'dramas', but added that the use by contemporary artists of figurative subject matter to convey emotions and experiences was no longer practicable: 'with us the disguise must be complete', he asserted. The 'multiforms' brought Rothko to a realization of his mature, signature style, the only style Rothko would never fully abandon. The fields of color were about to arrive. [caption id="attachment_21054" align="aligncenter" width="697"] 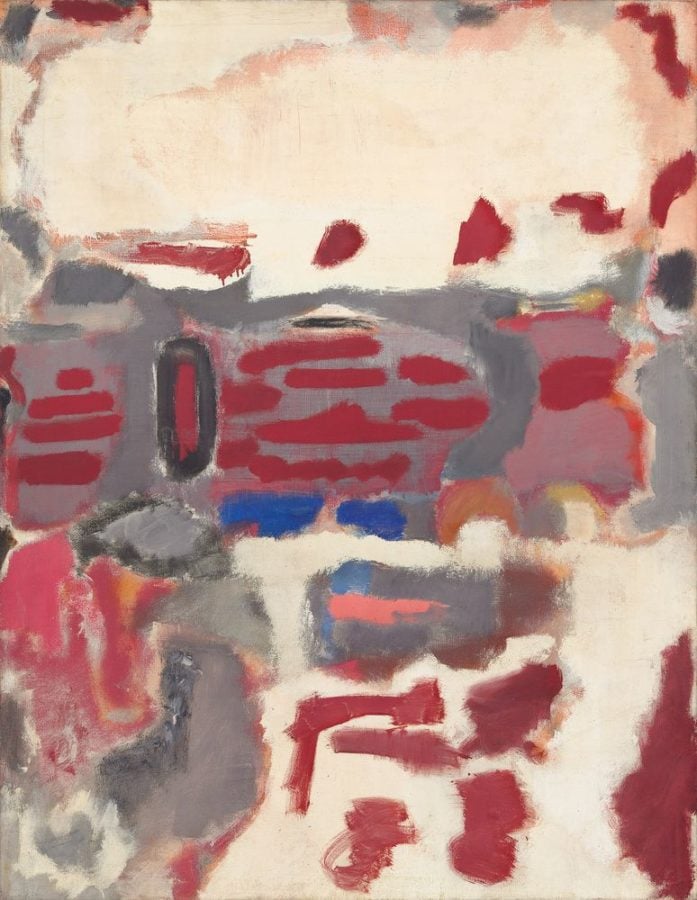 Mark Rothko, No. 2, 1947 © 1998 Kate Rothko Prizel and Christopher Rothko/Bildrecht Wien, 2019. Courtesy National Gallery of Art, Washington, D.C.[/caption] Until June 30th 2019 in the Kunsthistorisches Museum in Vienna you can see the exhibition 'Mark Rothko' which also covers his early works. The exhibition provides a unique opportunity to examine Rothko’s deep and sustained interest in the art of the past. From his earliest visits as a student to the Metropolitan Museum of Art in New York, and his first encounters with Rembrandt, Vermeer and classical art and architecture, to his trips to Europe to see its churches, chapels and Old Master painting collections in Paris, London, Venice, Arezzo, Siena, Rome, Pompeii and Florence, Rothko dedicated himself to the study of historical art and architecture until his death by suicide in 1970. [caption id="attachment_21053" align="aligncenter" width="884"] 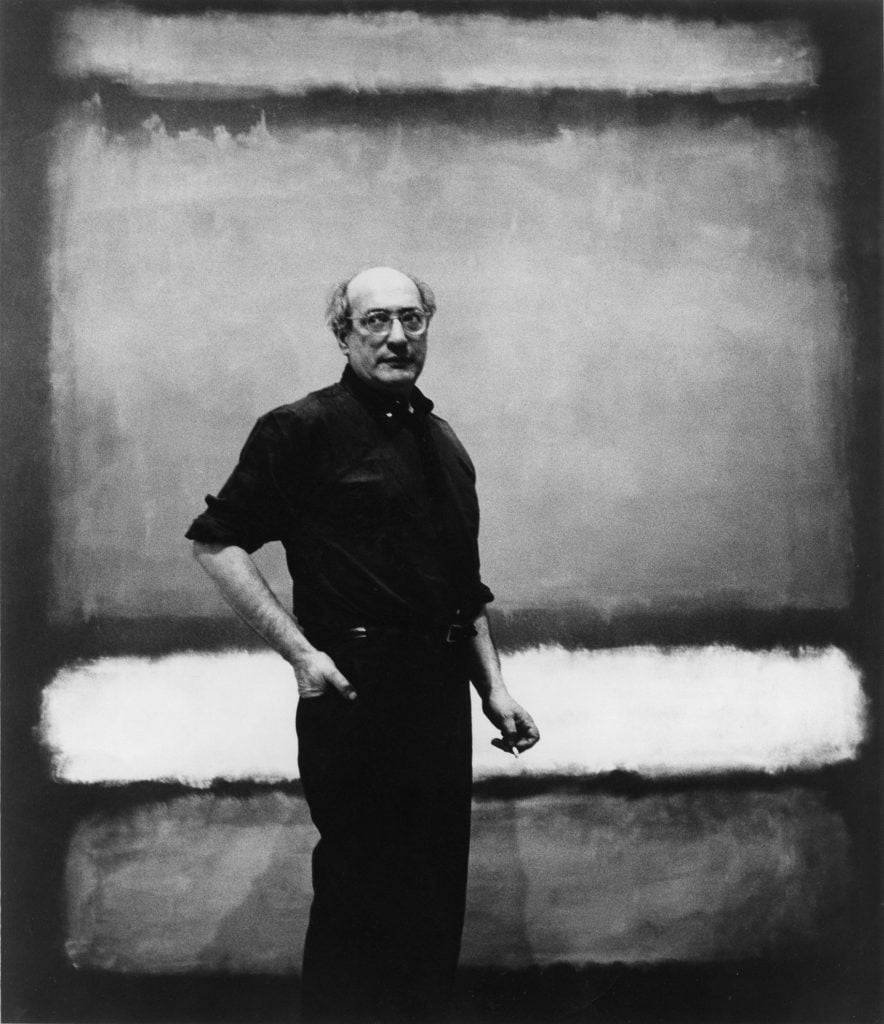