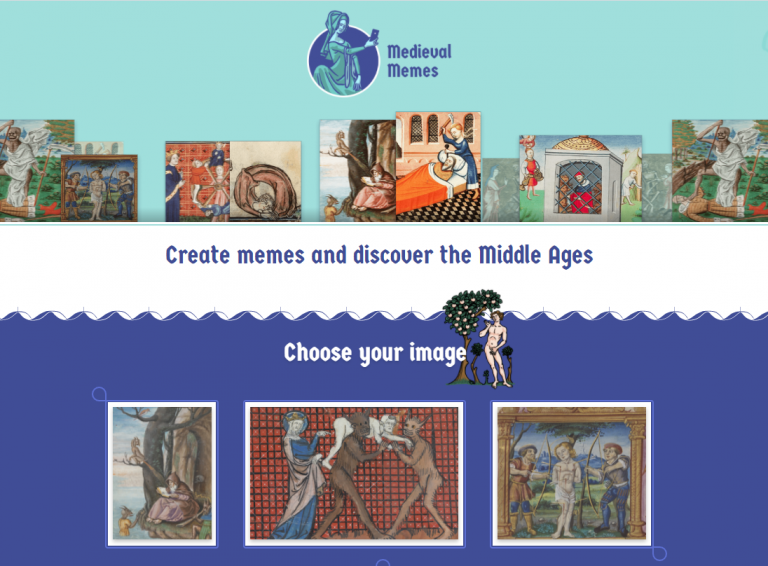 Do you think a meme is the millennial method of transmission of knowledge? You scroll no more than a few inches on any digital social media platform, then you bump into a meme that has already tickled you or probably enlightened you with new data! From a source of casual pastime for those blessed with a funny bone, meme-making has grown into a full-fledged creative genre of production. A distinct mode of self-expression that ridicules socio-cultural and political hegemony to the routine conundrum, it has caught the attention of art educators worldwide. Nevertheless, we observe that a meme is developing into an art historical pedagogical tool.

The Medieval Meme Generator began as a Dutch tool to create memes using medieval paintings. Since its launch in November 2020, this unique meme-making portal has become an interesting breeding space for a new form of production that sweeps both the professional and the layman!

An initiative of the Royal Library of the Netherlands (Koninklijke Bibliotheek), the Medieval Meme Generator provides access to Dutch paintings from the medieval era to create personalized memes. All images are accompanied by a text explaining the historical context of the work and the associated story. One can also check out a short video clip about each painting that again explains the painting to the viewer. The Medieval Meme Generator scores quite well on the functionality quotient as the instructions provided are simple and clear while you only need elementary internet usage skills for becoming a meme artist. The site is functional in both Dutch and English. So it’s great for non-Dutch speakers curious to know more about these medieval paintings and try out something new and fun.

These handmade manuscripts created during the Middle Ages illustrated stories from the Bible, court, and popular folklore. Due to illiteracy, the illustrated manuscripts served as a legible method of visual knowledge. With their potent narrative, storytelling, and deep symbolism, the Dutch illustrations feel quirky enough to be “memefied”. The best part about the Medieval Memes Generator is that you are not bound by the painting’s historical context while creating the meme! You are free to make your own funny and modern interpretation. It could be a political, cultural, and social satire, or just something generally goofy and funny.

The recent pandemic has pushed us to scroll longer and longer while being trapped at home. Just as the present grim time has radically transformed the way art is created and consumed digitally, it has forced people to confront the same old world in newer and different ways. And this trend is actually not so new! Marcel Duchamp’s LHOOQ is an absolute prototype of the present memes! Interestingly, the whole idea of combining art education with the playful meme-making exercise that the Medieval Meme Generator indirectly highlights is novel and exclusive.

Some Made Medieval Memes

The Medieval Memes Generator has had an overwhelming response as 15,000 medieval memes have been created across 129 countries. These memes have reached an audience of at least 2 million people across the world.

Many of the memes created through the platform have become exceedingly popular. Memes such as Saint Anthony Trying to Concentrate, Bernie Sanders Crashing Multiple Medieval Coronations, Sad Looking Pigs on Early Monday Mornings, and Skeletons on a Dung Hill have been shared multiple times on platforms like Reddit and Twitter, among others. Simply funny!

In one of the paintings on Medieval Meme Generator, Saint Anthony is peacefully sitting on a rock and reading. According to the real narrative, devils disturbed him while enjoying his leisure. As the process of memefying would do, the text “Working From Home Be Like” attributed to the image drew the past to the present! Then, there is another visual that shows a rather calm-looking person playing the violin with an extremely flexible lady enjoying the music while showing off amazing dance moves. The meme that got made: “Going back to the Club” be like!

The Medieval Meme Generator is an intriguing initiative that enables a potential relearning of the Dutch medieval age apart from creating an interplay between an image and text. The portal makes sure that you receive a regular revision of templates to ideate and execute many medieval memes while refining your meme-making skills.