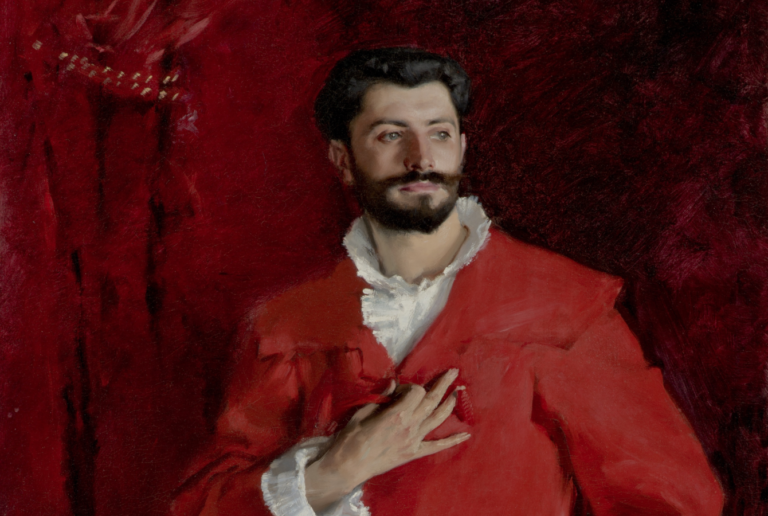 There he is, a handsome gynecologist in a portrait entitled Dr. Pozzi at Home painted by John Singer Sargent. Pozzi was a dandy, a gynecologist, and a notorious womanizer. An extremely handsome man, who, if he had lived during the 20th century, would surely have become a celebrity. Standing in his scarlet dressing gown with characteristic panache, he was described by a contemporary as “himself a kind of beautiful work of art.” Because of his handsome appearance and cultured demeanor, his school friends nicknamed him “The Siren”.

When I look at this painting I always ask myself – why doesn’t my gynecologist look like that?

I’m also envious of his shoes.

Samuel Jean Pozzi was an aesthete and an art collector whom Sargent greatly revered. The artist’s admiration for his charismatic sitter is evident in this dramatic portrait. The crimson costume references images of popes and cardinals that were painted by the old masters. Pozzi’s long fingers and elegant hands suggest his surgical prowess but also hint at his sensuality.

But back to Pozzi’s biography. In 1864, Pozzi began to his study medicine in Paris. When the Franco-Prussian War broke out in 1870, he volunteered and became a medic. After the war, he traveled to Austria, Germany and Britain to study gynecological methods and became one of the pioneers of gynecology in France. He gained a reputation as a teacher, preferring to make his rounds dressed in white overalls and wearing a black cap.

In 1881, Pozzi became a hospital surgeon, specializing in gynecological and abdominal surgery. In 1913, with Georges Clemenceau he organized the first transplant symposium in Paris. In 1914, he joined the forces again when the First World War broke out and he became a military surgeon.

Although his professional life is very important, here, we will focus mainly on his private life.

In 1879, Pozzi married Therese Loth-Cazalis, heiress of a railroad magnate, and had three children: Catherine, Jean, and Jacques. Despite this Pozzi had plenty of affairs, including with: the opera singer Georgette Leblanc; the actress Rejane; the widow of Georges Bizet; and the daughter of an art dealer, Emma Sedelmeyer Fischof. Emma who was married to a horse breeder, was a beautiful, cultured woman of Jewish descent who became Pozzi’s mistress in 1890. Pozzi’s wife refused to grant him a divorce, but Emma remained his companion for the rest of his life.

He was also one of Sarah Bernhardt‘s lovers.

In his early days in Paris, Pozzi had met Sarah Bernhardt through a childhood friend, the actor Jean Mounet-Sully. According to Gustave Schlumberger, they briefly became lovers, and afterwards remained lifelong friends. In 1898, Bernhardt insisted that Pozzi operate on her ovarian cyst. In 1915, she called on him again, and Pozzi arranged for a colleague to amputate her damaged leg.

With such a grand and colorful life Pozzi’s death couldn’t be any different. On June 13, 1918, Maurice Machu, a former patient, approached Pozzi in his consulting room. Two years earlier, Pozzi had amputated Machu’s leg and he had become impotent. Machu asked him to operate on him once again. However, the doctor refused as he was unable to remedy the situation. And so, Machu shot him four times in the stomach. Pozzi ordered himself to be taken to the Historia Hospital, where he had an emergency laparotomy but it was unsuccessful. He asked to be buried in his military uniform and died shortly afterwards. Machu later committed suicide.