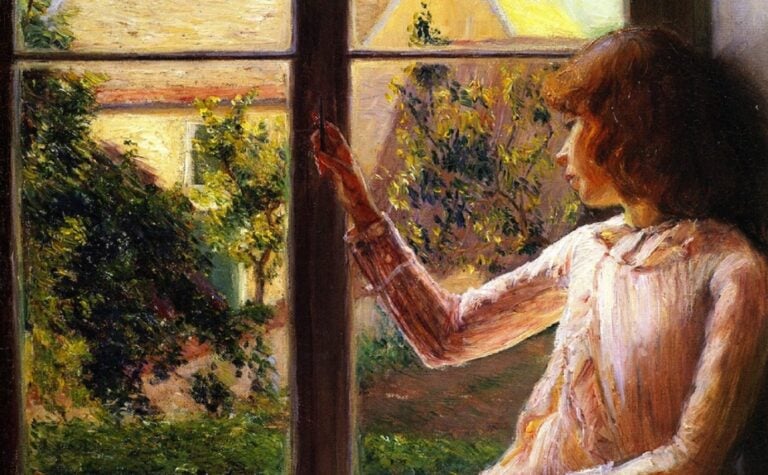 Adults say that childhood is the best phase of life. It is this time when we are freer and more sincere and sometimes our best memories come from childhood. This unique period was chosen as a dominant theme in the Lilla Cabot Perry oeuvre.

Lilla was born in 1848 in Boston and her own childhood was very memorable. From a very young age, she was interested in literature, music, and drawing. Her very sensitive parents allowed the girl access to libraries and museums, while her friends taught her some drawing techniques.

But the time passed and Lilla grew up. When she was an adult, in 1874 she married Thomas Perry, a linguistics teacher. Two years after they had a daughter Margareth, who would become the first girl represented in Lilla’s paintings.

In following years Lilla would give birth to Edith (1880) and Alice (1884). The three daughters became her primary models.

In her first painting, Portrait of an infant, Lilla accentuates an evident play between light and shadow to heighten the emotional impact of the painting. We almost cannot see the face of little Margareth, who is also completely oblivious to the observer. It is a singular moment of the girl’s childhood registered with emotion of the painter and the mother.

Almost ten years after this first portrait, Lilla begins her formal education in art, still in Boston, and her first work of this period is The Beginner. Margareth is once again the model for her mother.

In 1887, the Cabot Perry family moved to France. The painter continued her studies in Paris, not only attending classes, but also constantly visiting museums. It is at this time that she met Claude Monet, Camille Pissarro and Mary Cassatt, with whom she soon established a deep friendship. Lilla was interested in Impressionism and began experimenting with this style.

From that moment on, Lilla’s work began to focus heavily on the effects of color and light, and she took the opportunity to portray her daughters in the gardens and other open-air places.

Lilla’s own technique underwent quite of a transformation. Instead of the dramatic light effects of her early works, she now adopted a freer style, with less rigid brush strokes.

With time she definitively became an Impressionist painter. We can see this in the portrait of Alice, her youngest daughter.

Lilla spent some time in Giverny learning more about the Impressionist technique with Claude Monet, whose many portraits and landscapes were produced there. We can see how Giverny affected her style: her works vibrated with colors, revealing the artist fully absorbed in the spirit of Impressionism.

Lilla’s family traveled a lot, which contributed to diversification her work, including influences from the oriental art, since her husband was invited to teach in Japan and Lilla learn Japanese painting techniques. Yet despite such diverse experiences, Lilla continued to represent childhood.

Lilla continued painting until her death in 1932, aged 88. She had an intense activity as a painter and her influence was very important for the recognition of Impressionism in the United States. She profited from all the lessons of other artists to subsequently develop a unique style.

If you don’t lose the inner child, you always do what you like, as Lilla did. Her portrayal of childhood is a reminder of her legacy: that the child inside each of us should always remain close by, colorful and vibrant.