Carl Larsson and His Cozy House 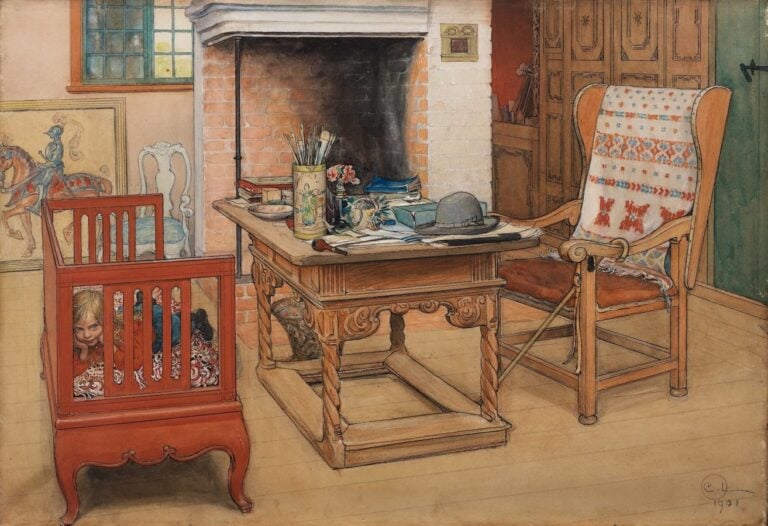 It's difficult to be a prophet in one's own land... I guess this rule can apply to artists too. Carl Larsson, one of the most renowned Swedish painters nowadays, initially had no success in his own country. Everything changed when he moved to a Scandinavian artistic community outside of Paris and apparently when he gave up oils for watercolors. But today's story is not about prophecies but homes, so let's visit Carl Larsson in his cozy house!

Larsson moved to Paris in 1877. Initially, he found it very frustrating because he didn't want to establish contact with the French Impressionists. Additionally, he had not made any progress in his own career. After spending two summers in Barbizon, he settled down with his colleagues in 1882 in Grez-sur-Loing. This is where he met the artist Karin Bergöö.

Karin was also an artist, but after her marriage and bearing eight children, she stopped working (so sad!). However, the family quickly became the center of attention of Carl, too. His most successful works depict his house, which nowadays is one of the most famous artist homes in art history. You can read more on the house's website, here.

The couple received their house from Karin's father. They kept redecorating it in a comfortable Arts and Crafts style. Karin focused on the textiles, whereas Carl painted, also in the style of Aestheticism. His works gained popularity with the development of color reproduction technology in the 1890s. Consequently, one of the Swedish publishers, Bonnier, published books written and illustrated by Larsson, which contained color reproductions of his watercolors. The books even became real bestsellers!

The Gallery as New House

Having become more successful, Larsson was finally accepted at the Paris Salon. He was also commissioned to complete several large frescoes for the foyer of the Stockholm Opera. However, the committee for the Swedish National Gallery declined to install Midwinter Sacrifice ,which showed a Norse legend and was to be installed in the hall of the central staircase. It left Larsson devastated because he considered it his masterpiece. However, the Gallery ultimately accepted it 8 years later.