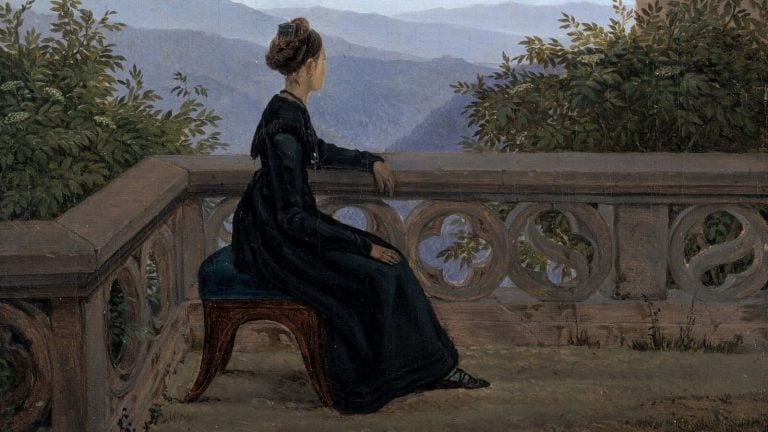 Woman on the Balcony is an intimate portrait of a person lost in thought. There is no action and no obvious story to interpret. However, its quiet stillness has a magnetic appeal. Meditation and reflection saturate the image. It is a tonic for the modern disease of overstimulation.

Woman on the Balcony was painted in 1824 during the height of Romanticism. Romanticism in the visual arts was from roughly 1800 to 1840. It was an era dominated by a change in attitudes towards life and art. The Age of Enlightenment was on the decline as Western society moved from reason to feeling as the new definition of freedom. Western society was beginning to value more intuition over calculation, and subjectivity over objectivity. Romantic painters like Carl Gustav Carus and Caspar David Friedrich believed that isolated figures in landscapes could evoke Romantic feelings and emotions.

The painting is a small quiet image. It only measures 17 by 13 inches or 42 by 32 centimeters and is composed of oil on canvas. Within the scene, a single figure sits on the balcony of a Medieval residence. The woman wears a simple black dress with few ornaments. Her head is turned away from the viewer as she faces the many hills receding into the distance. There is no movement or action in the landscape. It is a moment of pause, silence, and mystery. Is the woman waiting for someone or is she lost in her thoughts?

The woman’s attire is austere and somber through its lack of embellishments and color. Her dress appears to be made of plain but expensive black silk. A cheap cotton dress would not have the gloss and sheen of the woman’s dress. Only a premium silk fabric would give that lustrous effect to its cascades and folds. Around the woman’s neck is a thick black necklace. It appears to be composed of either silk or velvet. The necklace is quite long as it reaches past her shoulders down to her chest where suspends a large silver crucifix.

Gold hoop earrings adorn the woman’s ears. They are so plain that they are easily overlooked by the viewer as they almost blend into the golden tones of her skin. The understated style of the earrings continues in the hair comb in the woman’s hair. Her hair is modestly coiffed into a bun. The comb holds the arrangement in place at the top of her crown. The comb is dark like her dress and could be formed from cut steel, ebony wood, or jet stone. Overall the woman appears to be modestly dressed but not poorly dressed. Her refined attire adds to her wistful, melancholic, and lonely isolation.

To the woman’s right is the tower of a Medieval structure. It has two tall narrow windows with pointed arches known as lancet windows. The building also has a low protective wall along the edge of the roof known as a parapet. These two distinctive architectural elements are hallmark signs of the Gothic style spanning from the late 12th century to the early 16th century. Gothic buildings were widely praised during the Romantic Movement. They visually connected present viewers to the distant past. They hinted at forgotten times and lost histories.

Carl Gustav Carus was a friend of writer-poet Johann Wolfgang von Goethe and friend-student of painter Caspar David Friedrich. Goethe and Friedrich were probably the most important leaders of the Romantic Era in Germany. Carl Gustav Carus was artistically influenced by them, but he added his own psychological perspective to his paintings through his professional experience as a psychologist and medical doctor.

Carus did not rely on the deep shadows found in Friedrich’s paintings to achieve his psychological element. He relied on the stark isolation of figures and their composition implications. The woman in black is not shrouded in physical mystery, but she is shrouded in metaphysical mystery. Why is she here? What is she thinking? How is she feeling? Viewing Woman on the Balcony is like tasting expensive French vanilla ice cream. At first, it appears deceptively simple. However, there is a delicious complexity to be savored.