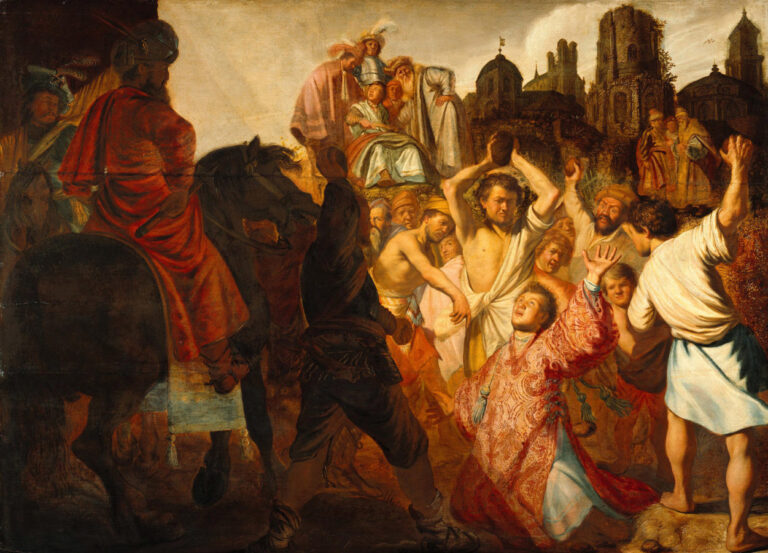 Gentle Giant in the River. Medieval Representations of Saint Christopher

According to the Catholic calendar, the second day of Christmas commemorates St. Stephen. He was a young deacon in the community of Jerusalem who became the first martyr in the name of Jesus, an event recounted in Acts 7. Let’s spend this Boxing Day with St Stephen!

The work by Rembrandt was influenced by this painting by Adam Elsheimer. Here, Stephen utters his last words to the heavens, which open up to let the divine light out. Elsheimer originated from Frankfurt, but as many painters of his era, he moved permanently to Rome. Before that, however, he spent some time in Venice. There, he got to know Tintoretto‘s paintings, which made a huge impact on his own painting style.

This oil painting is a part of a diptych originally placed in Collegiate Church of Notre-Dame in Melun in northern France. Etienne Chevalier, the treasurer of King Charles VII of France, commissioned the court painter Fouquet to depict him with his patron saint, here represented with the instrument of his martyrdom, as iconography required. Mother Mary with Child is on the second panel, now hosted by Royal Museum of Fine Arts in Antwerp. Notice that St Stephen is holding his right hand on Etienne’s shoulder, what a statement! I would also like to be such good friends with saints…

In this painting, the stoning of the saint is just a minor event inserted on the bottom of the canvas. In fact, it serves just as a pretext for Breenbergh to elevate the landscape painting to a level of biblical painting, which was way higher in the hierarchy of genres. Breenbergh specialized in landscapes, especially Italianate landscapes, which in the Netherlands were gaining popularity in the first half of the 17th century.

Stephen, the next job

Paolo Uccello, described by Vasari as obsessed with perspective, in 1425 travelled to Venice. He got a commission for some mosaics for the façade of San Marco, but they have been all lost since. He might have travelled to Rome with his friend Donatello before coming back to Florence in 1431, where he remained for the rest of his life working on commissions all over the city, such as this one for the Cathedral.

Stephen and the magic hat

With his two brothers, his brother-in-law and his son, Domenico ran a workshop through which passed many apprentices, including such personalities as Michelangelo. The last asserted date for Domencio’s late works is 1491, but he worked until his death in 1494 from something like pestilential fever. Notice that in this painting St Stephen’s hat is hovering above his head to show everyone the wounds.