School and Learning in the Eyes of Artists 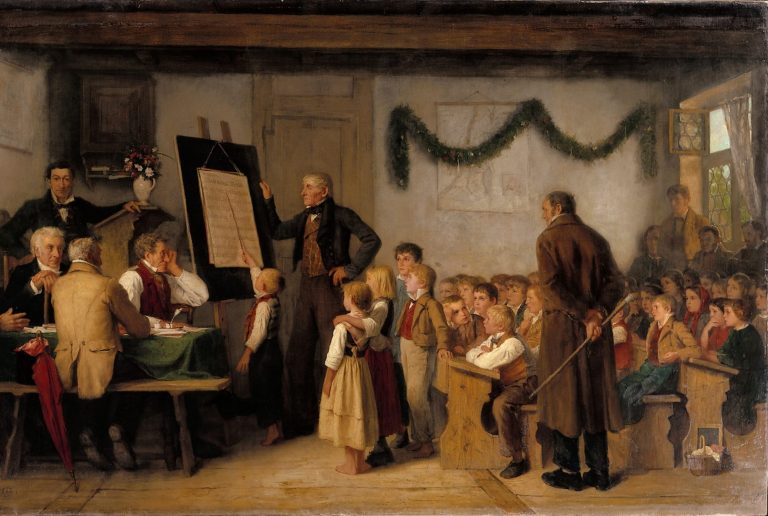 Back to School: The Great Art History 101

Online Learning? Back to the Old School in Art

The last two years since the outbreak of the Covid-19 pandemic changed a lot about the way children and students attend school and university. While most students around the world will go back to school this September, some will continue taking at least some of their classes online. Art is a great way to put things into historical perspective, so let’s see how painters from various countries and periods in history depicted the theme of the school.

During the Covid19 pandemic, many children and their families experienced education at home for the first time. Yet, before the introduction of compulsory school attendance (in the majority of countries in the 19th and 20th century), learning at home or within the local community was a common practice. Of course, the amount and quality of learning were related to wealth and status.

The young boy in this painting, Adriaen van Gaesbeeck, was initially incorrectly identified as Hugo de Groot, a Dutch humanist, diplomat, and lawyer. He is standing in front of a work table in the interior of a study. An open book, map, lute, ink set, globe, and a statue of Venus sit on the table. Shelves against the wall contain books and a map in rolls. In the foreground are another book, a map and a plaster head on the floor. On the right is a staircase to the upper floor and on the stairs is a girl with a book under her arm. In the middle stands a column with a painting of a child’s portrait.

This work by Oscar Björck depicts the classroom in the small school in Skagen, a village popular among Scandinavian painters because of its picturesque landscapes and the warm local community.

The teacher, dressed in black, resembles Madame Henriksen who can be seen in several paintings with motifs from Skagen by Björck and other artists. She is spinning wool, while the students concentrate on their reading.

3. The First Day of School

The first day of school is an important milestone for both children and their parents. On the left, we see a group of schoolboys. Behind them walks a servant carrying an embroidery frame (needlework was a favorite pastime of women in affluent Turkish circles). Following them all is a mother, accompanied by a group of women, bringing her daughter to school for the first time.

Jean Baptiste Vanmour specialized in depicting life in the Ottoman Empire in the 18th century. His works illustrated both official events as well as daily life in and around Istanbul.

Evening or night schools for children were established in the Netherlands at the beginning of the 19th century. This type of school served children who could not attend school during the day or who wanted to continue their education.

In this painting by George Gillis Haanen, we see the interior of an evening school. A mother with a lantern brings in her son. In the middle, we see the master behind his desk. On the right students are reading by candlelight while on the left, two boys are standing by a stove.

Outdoor lessons are being discussed mainly in the context of children’s health. The schools set up during the outbreak of tuberculosis in the period leading up to World War II are another example. However open-air teaching in many parts of the world has been taking place for various reasons: from socio-economic issues to lifestyle or climate-related.

This painting by Leopold Carl Müller presents an open-air school in Upper Egypt in 1881. The students sit on the ground and concentrate on reading and writing. Meanwhile, a serious-looking teacher is observing them. In the background, we see more groups of children with their teachers. Leopold Carl Müller spent a lot of time in Egypt, painting the local life and landscape and is renowned as the most important Austrian painter of the Orient.