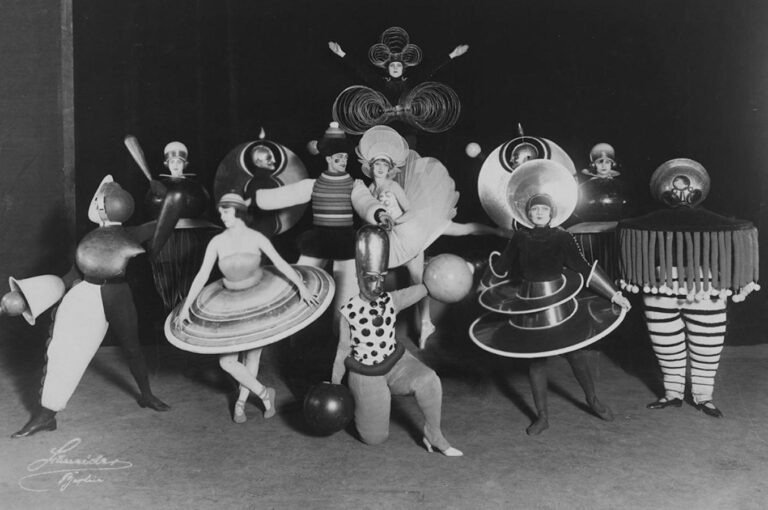 Dress Like a Byzantine Empress – Byzantine Art in Fashion Collections

Halloween’s coming! Have you got a costume already? Do you want to emphasize your passion for art but are bored with the usual Frida Kahlo unibrow? How about an artsy Halloween costume?

Hugo Ball was an author and poet who founded the Dada movement in Zurich, Switzerland. In this photo you can see him dressed up in a ready-made-style costume, so typical for Dada artists! It’s definitely easy to make yourself with just a pair of scissors and some paper.

Triadic Ballet (Triadisches Ballett) was a ballet performance developed by Oskar Schlemmer in 1922, a German artist associated with Bauhaus school. This was an avant-garde form of dance that promoted the ideals of the Bauhaus. The performance was described by the artist as: “artistic metaphysical mathematics.”

Iconic Austrian painter Gustav Klimt is captured in this photograph wearing his characteristic robe. Simple, but classy, isn’t it?

French artist, Henri de Toulouse-Lautrec had quite a sense of humor! Here you can see him dressed as a clown – as far as Halloween costumes go, this one may not be scary but is definitely entertaining!

René Magritte‘s iconic hat can easily be recognized by most. Therefore, if you’re a minimalist, you can just to a Halloween party wearing only a suit and an upside-down hat!

This one might be harder to guess! Only seasoned Marina Abramović fans might recognize this Halloween costume, or just a Halloween prop…

Why not become a cremaster muscle from Mathew Barney’s The Cremaster Cycle? The American visual artist created this series of five feature-length films that refer to themes of human biology and procreation.

Hope we sparked your imagination with this selection of Halloween costumes inspired by art history! How about you? Would you wear one of these?