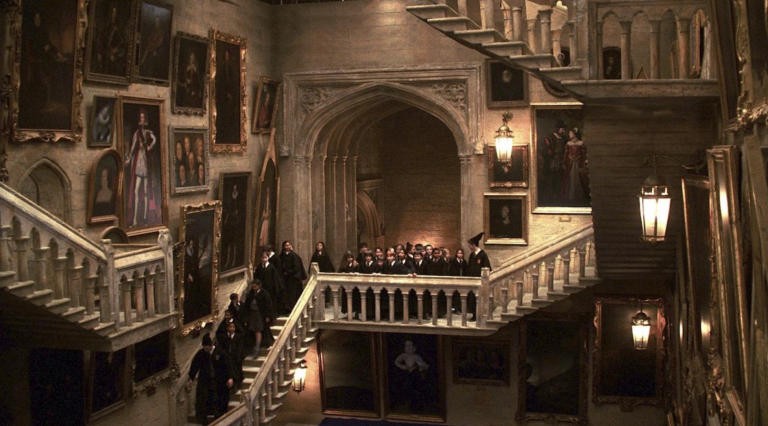 The Harry Potter franchise is known for its magical narrative and captivating characters… but its films also have subtle nods to art history. Here are all the art references in Harry Potter movies, or at least all I could find: The Unicorn Tapestry, a portrait of Anne Boleyn, Leonardo da Vinci’s The Vitruvian Man, 5th-century pottery, and MC Escher’s staircase!

In the 2004 film Harry Potter and the Prisoner of Azkaban, Professor Severus Snape says his infamous line, “turn to page three hundred and ninety-four.” At this moment, he pulls down the projector and explains why Professor Lupin is absent. As a result, Professor Snape decides that they will focus on the nocturnal beasts – werewolves. Then the projector flashes an image of a werewolf in a formation reminiscent of Leonardo da Vinci‘s work, Vitruvian Man.

Leonardo’s prints are currently at the Gallerie dell’Accademia, in Italy. His Vitruvian Man drawing was originally called the study of the proportions of the human body. While the geometric shapes seem odd, the circle and square have symbolic meanings in Leonardo’s work. The circle and square represented the sky and earth during the Middle Ages. And as the museum’s website states, the presence of a human within these two shapes corresponds to the analogy of macrocosm and microcosm. Therefore, it was a clever move for Harry Potter filmmakers to show a werewolf instead of a human for this class lecture on nocturnal beasts.

Another art reference is illustrated in the same class taught by Professor Snape in the 2004 film Harry Potter and the Prisoner of Azkaban. As seen in the image above, the pottery depicts the Iliad’s Dolon in wolf skin. Given that the author of the Harry Potter series, J.K. Rowling, was a Classics major in college, this reference to classical art history is understandable. In Homer’s The Iliad, the character Dolon wears wolf skin during the Trojan War to hide from his enemies. But in Professor Snape’s class, this rendition includes an actual wolf eating a human. While there are certainly many examples of this type of pottery, the best example is at the Louvre Museum in Paris.

Next (and you probably might have never recognized this moment), The Unicorn in Captivity, from The Unicorn Tapestries, is shown in Harry Potter and the Half-Blood Prince. As Draco Malfoy walks the corridors of Hogwarts, the camera shows Draco standing in front of a replica of The Unicorn in Captivity. Although the real tapestry is currently on view at The Met Cloisters in New York City, the model looks identical to its original.

The Unicorn Tapestries set tells the story of a holy unicorn hunt during the Middle Ages. This specific tapestry is the last within the series of seven and depicts the unicorn as caught and in captivity.

Of course, this is not the only tapestry reference in the Harry Potter films. Another set of well-known tapestries, The Lady and the Unicorn Tapestries, is featured on the walls of the Gryffindor common room.

M.C. Escher and the Staircase

In the first movie, Harry Potter and the Sorcerer’s Stone, from 2001, viewers get their first glance at the magically confusing staircase. The crisscrossing mobile staircase was inspired by M.C. Escher’s graphic design from 1953. Maurits Cornelis Escher was born in 1898 and became one of the most famous visual artists during his lifetime. He was born in Leeuwarden, Netherlands, and attended the School of Architecture and Decorative Arts in Haarlem.

Escher made 448 lithographs, woodcuts, and wood engravings during his career. Relativity, from 1953, is his most famous work, which has been copied thousands of times. At first, the staircase looks as if the ends will never meet, but upon closer look, they meet in “impossible shapes.”

The geometrical mystery of the staircase fits perfectly within Hogwarts. And the filmmaker’s take on a moveable staircase expands on Escher’s graphic, taking it to a new level (literally and figuratively).

Last but certainly not least, another famous art historical reference is seen in the staircase at Hogwarts. In the first movie, Harry Potter and the Sorcerer’s Stone, from 2001, there is a scene where the three main characters are walking up the staircase. Instantly, a recognizable portrait of Anne Boleyn is hanging on the wall. Anne Boleyn was King Henry VIII’s second wife, known for her scandalous affair and beheading in 1536. Henry VIII divorced his first wife, Catherine of Aragon, and had five more wives. To do this and marry Anne, he cut ties with Catholic Rome and formed a new church, the Church of England. Anne Boleyn only had one surviving child, the future Queen Elizabeth I. Unfortunately, Henry had Anne beheaded for treason three years after they married.

According to Harry Potter fans online, the portrait of Anne Boleyn is historically significant since she was accused of being a witch during her lifetime but was a squib (a made-up Harry Potter word). But even her husband, Henry, proclaimed that he was “bewitched” by her beauty and charm. Therefore, that is why she is hanging on the walls of Hogwarts with other witches and wizards.

Any historical art hints we didn’t mention here? Let us know in the comments!