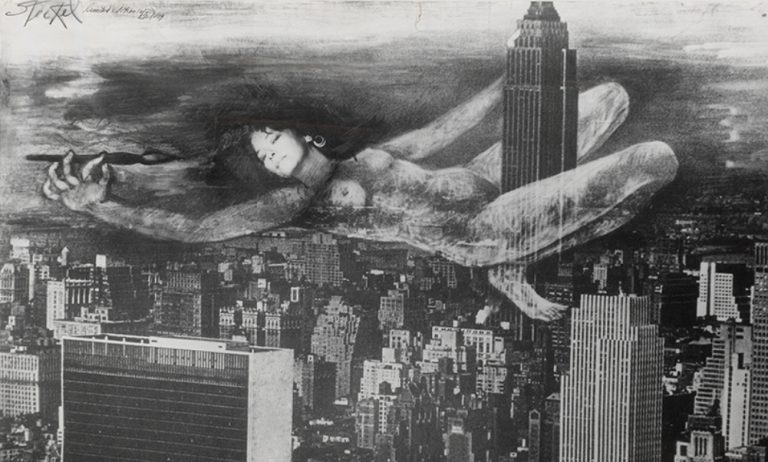 Anita Steckel was a feminist artist of the late 20th century who pushed the boundaries of what was considered acceptable. Her art and beliefs were considered eccentric for a woman. During the 1960s and 1970s, when Steckel gained recognition, women artists did not enjoy the approval of the art world. Even though there were many of them, female artists had to fight to earn a place in the pantheon of great artists of the time. Steckel was one of them.

In her artworks, she addressed matters of gender identity, female objectification, sexual desire, and social injustice. Along with other female artists of the time, she founded the Fight Censorship Group in 1973, in an effort to combat censorship against her fellow artists. She fought for artistic freedom and feminist clarity and visibility throughout her life.

Anita Steckel was born on February 24, 1930, and passed away on March 16th, 2012. She was the child of a troubled family, her mother was very abusive and her father suffered from a severe gambling addiction. Yet that did not stop her from pursuing an art education. So, she studied art at various institutions: Cooper Union, Alfred University, and the Art Students League of New York.

At the same time, she led a rather thrilling life. She wrote dirty limericks, dated Marlon Brando, and worked on a cargo ship. In addition, she was quite a dancer, winning a contest for Mambo Queen of Southern California. Despite her turbulent life, Anita Steckel never ceased to create and speak about her life and the way she perceived society through her artworks.

In the early 1960s, Anita Steckel created her first photomontage series where she painted over old photos. The goal was to create unexpected associations and surprising spins on subjects such as racism, sexual inequalities, and war. This was when she started showing her work in solo and group exhibitions. The very first series was called Mom Art (1963). Steckel did not like the term Pop Art, as she considered it an interpretation of paternal art, not popular. So, by naming her collection Mom Art, she feminized it.

One of the most controversial pieces of the series is The Impostor. Steckel revamped the portrait of a priest in a church by putting him into pantyhose, high heels, and sunglasses. She also cut off the lower half of his white robe to show his legs, which look like a Hollywood showgirl’s legs. The controversiality of the artwork is obvious. On the one hand, there is piety. On the other hand, there is a proud and loud sexualized femininity.

Another piece from Mom Art is The Librarian. This photomontage shows a librarian with big glasses and a sober expression, as an extension of her profession. However, Steckel gave her a lace black bra and a G-string because even though a librarian holds a great virtue, she is still a woman with sexual desires.

Later in the decade, Steckel created the Giant Woman series. Here, we see oversized women taking over the city of New York. The idea of the series is connected directly to the women’s movement that they have outgrown and exceeded their roles in society, as it was previously defined. This is how Anita Steckel felt herself, so she used her own photos in the series as a way to show how small the society was not only for her but for the female gender in general.

The Sexual Politics of Feminist Art

In 1972, Steckel put on her first solo exhibition, The Sexual Politics of Feminist Art, at the Rockland Community College. The exhibition was the artist’s most controversial because it showcased sexually explicit works. This led to the disapproval of the local authorities. The critics even suggested either closing it or “moving it to a more appropriate venue”, meaning the men’s or women’s restroom.

Steckel said the Giant Women, which was part of the exhibition, was only a response to what she felt, that men owned the city. In another series of the exhibition, N.Y Canvas, the pieces complement this belief. A mother feeds her muscle-man son sperm and tells him “Eat your power honey before it grows cold”. Another powerful work shows the Hudson River filled with gefilte fish. Hitler is portrayed as a patriarchal menace. A nude female is cutting his throat with an ax, which is wielded between her legs.

As a reaction to the criticism she received, Anita Steckel found the Fight Censorship Group in 1973, along with other popular female artists, such as Louise Bourgeois, Martha Edelheit, Hannah Wilke, and others. The goal of the initiative was to fight the censorship that women artists faced because of their gender. The art world did not consider them to be equal to their male counterparts.

In order to defend herself, for her art, the exhibition, the group, Anita Steckel stated: