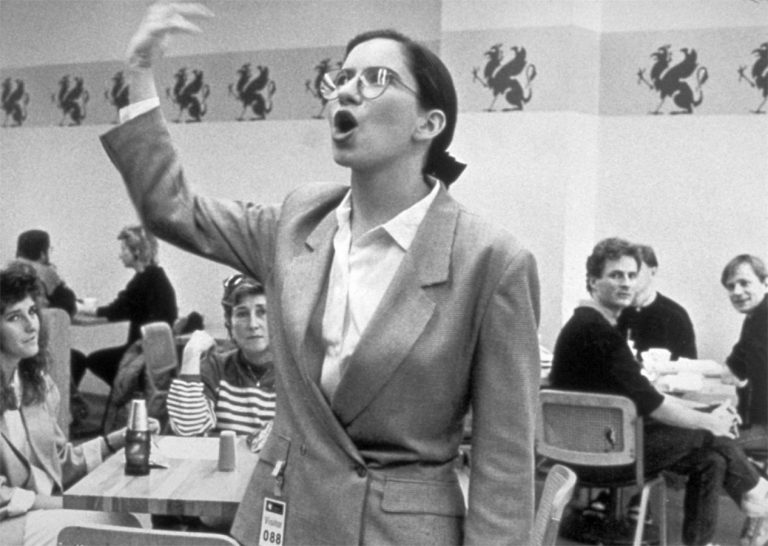 American-born Andrea Fraser is a leading performance artist of her generation (born 1965), best known for her work on institutional critique. She came to fame during the late 1980s and early 1990s, with her unique performances enacting various museum roles to comment on the elitism of the art gallery setting. Her brand of institutional critique impressed audiences for its wit and satirical content that questioned the modern-day museum’s function with its self-imposed hierarchy. Considered to be her most well-known and perhaps even most notoriously associated with the artist, Museum Highlights: A Gallery Talk sees Fraser act as a snobby and hilarious museum guide as she gives a tour of the Philadelphia Museum of Art.

With a career spanning over thirty years, Andrea Fraser stands as one of the beacons of performance art and institutional critique. Having attended New York University and the School for Visual Arts, her career first began with her writing art criticism, with this style of analysis later being incorporated into her performance art pieces. Museum Highlights stands as her most famous performance, however, later pieces such as Little Frank and His Carp (2001) and Projection (2008) also gained immense popularity through Fraser’s unique brand of mimicry and satire to comment on the institution of the museum.

In her most famous performance to date, Museum Highlights: A Gallery Talk (1989), Fraser takes on the role of a museum docent called Jane Castleton who leads a tour around the Philadelphia Museum of Art. Alongside the conventional elements of a museum tour, Castleton begins to express her thoughts on various other elements of the gallery, such as the men’s toilets and the reception area. Also, at sporadic points throughout the tour, she gives her opinions on political and sociological ideas, much to the amazement of her audience. Furthermore, she also gives her opinions on broader social and political ideas with great passion and force. In this sense, she uses her role as an artist to highlight how the museum docent has power over the audience, in having the knowledge of the museum or gallery setting and being able to control the narrative the audience is subject to.

As Jane Castleton, she calls herself ‘a guest’, ‘a volunteer’ and ‘an artist’, presenting herself as a humorous satire of the stereotypical museum docent. Fraser uses this satire to interfere with one of the museum’s inherent functions: to inform and present itself as a sacred space of higher learning. Her employment of flamboyant language when describing the museum’s toilets undercuts the supposed sanctity of the museum space, as considered by critic Carol Duncan to be a ‘ritual setting’.

For Fraser, the audience is integral to her work just as much as it is to the museum itself. As she states about her role as Castleton ‘she is the museum’s representative, and her function is, quite simply, to tell visitors what the museum wants – that is, to tell them what they can give to satisfy the museum.’

She often does this by incorporating and inhabiting the social role she sets out to critique, in this case, a highly educated and upper-class docent. During her performance, she tells the audience “And for those who have not yet cultivated a taste, the museum will provide a ‘training in taste“. This quote emphasizes the common notion that only ‘cultured’ individuals can truly appreciate the fine art on display in museums, showing the museum’s subliminal discrimination against the working class. In addition to discussing the importance of the audience, she promotes the concept of there being an ideal audience with art historian Alexander Alberro explaining ‘she analyses the type of viewer the museum produces and the process of identification that artists embody’.

In a recent interview in 2019 to mark the thirtieth anniversary of Museum Highlights, Fraser recounts that:

“One of the fundamental premises of institutional critique as I understand it is that the effectiveness of critique is always limited to a particular moment of intervention.”

Indeed, this critique of the art museum setting remains relevant today (31 years later) due to the lack of structural change in the hierarchy of the museum.

Andrea Fraser captures the essence of 20th-century institutional critique through her performance as the enigmatic Jane Castleton. While she confused and confounded her audience, she was able to cause a rift in contemporary theories surrounding the hierarchy of the art museum and the power associated with these institutions. This dialogue created between art institutions, the artist, and the viewer continue to perpetuate works of institutional critique, even to this day.