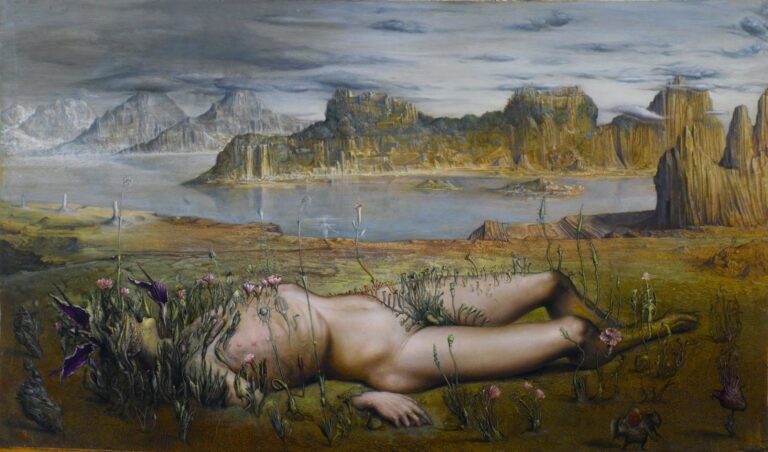 Agostino Arrivabene (born in 1967) is a visionary yet secluded Italian contemporary artist who continues to produce outstanding surrealist works from his 17th-century house located just outside Milan. His masterful paintings operate in a realm that has no time, boundaries, or laws of physics, creating a sort of ‘room of curiosities’ that gives the viewer a taste of bizarre and extraordinary foreign worlds.

Using his processes of alchemy, Arrivabene has transformed and reinterpreted classical, biblical and allegorical themes into a contemporary viewpoint. The new paintings draw from mythological stories and depict a transformative process in which inner suffering evolves into a desire for healing through a dream or divine intervention. Educated at the Brera Academy in Milan, Arrivabene combines painting, sculpture and goldsmithery to produce famous and outstanding projects, including Anastasis and Vesperbilder.

Anastasis is borrowed from the Ancient Greek ἀνάστασις (anástasis, “resurrection”) which refers to an iconographic theme of Byzantine art and depicts the resurrection of Christ and his descent into hell to recover the souls of Adam and Eve.

Vesperbilder (literally “vesper pictures”) are mostly wooden sculptures from 14th-century Germany depicting a Madonna with Christ’s dead body resting upon her womb. The German representations of the so-called Pietà are often characterized by intensely expressive and pathetic accents in the union of the two extreme stages of death and resurrection. Arrivabene’s contemporary Vesperbilder reflects on these concepts of transition, threshold, and the boundary between light and shadow.

Arrivabene’s masterful paintings in turn can stop time and create suspended intense moments outside quotidian time. Arrivabene has written of his work as forming a wunderkammer or a “room of curiosities,” such as those created to display the trophies brought back by adventurers returning from foreign expeditions. This attention to the minutiae of his craft has resulted in Arrivabene’s paintings embodying a process of alchemical transformation, in which the physical matter of painting itself is transmuted into extraordinary light-filled visions.

Through the years of self-taught training, the artist not only uses a mathematical proportion of the Golden Ration in his works but also rediscovers traditional painting techniques and makes many of his works with artisan preparation of colors. The other notable thing about Arrivabene’s work is how densely saturated it is with the history of painting, as his works resonate with a lineage of visionary artists from the past – we can see glimpses of Francisco Goya, Leonardo da Vinci, Gustave Moreau, William Blake, Odd Nerdrum and even Arcimboldo. And yet, despite this sense of continuity and connection with past masters, Arrivabene’s work feels fresh, contemporary, and distinctly his own.

His art presents itself as an extreme resistance of figurative art that is not dead, but rather fully alive and Agostino Arrivabene is the testimony of it. Transfiguration, twilight, and rebirth are strongly present themes in these “organic installations.” Skulls, flowers and butterflies, symbols of vanitas, allude to the transience of existence. The composite variety of expressions constitutes not only the work itself, but also the esoteric and oneiric world of Arrivabene in which visions, ideas, fears and dreams have been able to transcend the concreteness of lived reality.

Arrivabene’s typical artistic expression is that he frequently works with light in depicting characters, human faces, nature and living or inanimate objects. His very personal art can give the impression of gloominess, loneliness, sexual isolation and even melancholy. However, after a personal meeting with the author at the Arte Fiera in Bologna in 2017, I can confidently say that Arrivabene is nothing but an educated, intelligent and observant person who, in his works, shows only a portion of the infinite universe hidden in his mind. To anyone wondering if anything positive can be found in his work, I encourage you to consider that the light and the good is visible only in the presence of the darkness. In a senseless world is light just a cure against darkness and the hope of transforming what we perceive as a normal human being, to beauty in the natural simplicity that we overlook every day. Nature is a perfect example: from commonly seen animals, natural elements (water, fire, earth, air), trees in which human history is recorded through annual rings, to simple organisms like bacteria with which the essence of our being and life on earth is linked. There is a simple beauty in it. Man was born to give birth to something else. It is clear that the author was inspired by the representatives of painting, but his works bring something more than a skeptical view of society. The uniqueness of his work is found in the aforementioned explanation and in the principle of the cycle of life, which is an essential part of his artworks.

Arrivabene’s interest in mythology dates back to his childhood, in which the death of his mother caused both internal and external upheaval. While undergoing this emotional trauma, he discovered that in mythology there is a very strong sense of the tragic in human being. With this background, it is clear how the author uses the tragedy accessed through Greek mythology to deal with the death of his mother through his works. This sense of depravity has become fundamental to the narrative found in Greek tragedy. Myth, with its sense of mystery and tragedy that Greek man suffered under the power of the gods, has become a kind of metric to investigate Arrivabene’s contemporary reality.

Arrivabene begins his relationship with art through his drawings, which he used to express himself and measure the depth of his emotions, considering the dramatic reality of his early years. Leonardo da Vinci was the first to accompany Arrivabene as his “first guide,” as Arrivabene refers to him. In his travels to Europe, Arrivabene researched the traditional and forgotten technique of old masters, resulting in fervent work and experimentation. In this way, he reintroduced the technical knowledge that was previously lost. In doing so, the masters of the past, along with their technique, became the bridge between the ancient and the contemporary. As Arrivabene creates and supplies the constructs of a new language, each of his works is like the germination of a new seed. Amidst this germination phase arises a new figure that becomes a hybrid between the natural vegetative world and human nature. Using these themes, Arrivabene studies and analyses Ovid’s Metamorphosis.

Arrivabene was able to observe reality from a peripheral view, constructing a language made of inscrutable representations and messages coded within literature, which lead to a hierarchy of deeper interpretative values. He says:

“I believe that history is a babel of knowing that is enclosed by human memory like a Borges-esque library. Everything that precedes us is like a cache of layered wisdom that nourishes new, still unexplored veins. The history of art has been able to sharpen the gaze and the search for the ideals of beauty, of harmony, and the mystery linked to these values. Art has become like a religion, and in these most recent years, artists have come to understand that we are like shamans, the perfect link between man and the imperishable, since before this period, art depicted religion, but now art is itself a religion.”

Arrivabene’s sense of religion found in his art is crucial for his pictorial representations, which reflect the emergence of inspired ideas and emotions. Through his works, Arrivabene aspires to discover what lies beyond death and to spark through the other side of the threshold that obligatorily completes man.