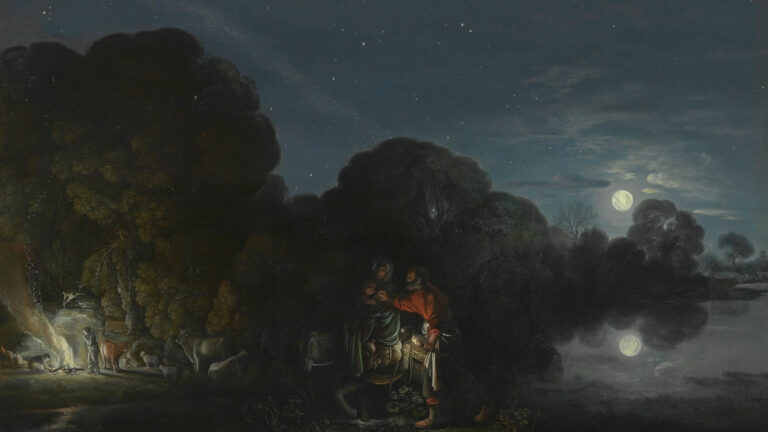 Flight into Egypt is a masterpiece found in the collection of the Alte Pinakothek in Munich, Germany. Human dramas are depicted with vivid virtuosity, imminent imagination, and evocative emotion. Adam Elsheimer presents a poetic microcosmic view within a miniature format. His style is sometimes dismissed as petite manière, or small manner, but his visual complexity and originality are anything but small. Adam Elsheimer and his Flight into Egypt could arguably be considered one of the founding cornerstones of the fabulous and fantastic world of Baroque art.

Adam Elsheimer was a German artist who lived from 1578 to 1610. Despite living for only 32 years, his brief life and artistic legacy were extremely rich and influential. Elsheimer originated from Frankfurt, traveled through Venice, and spent his last 10 years in Rome from 1600 to 1610. During these vibrant Roman years, Elsheimer had contact with two famous Flemish painters: Paul Bril and Peter Paul Rubens. The first was celebrated for his classically inspired Italianate landscapes. The second was renowned for his compositional movement, color, and sensuality. Elsheimer was stylistically influenced by these two artists, but he was not a mere copyist. Elsheimer fused some of their points and created his own signature style that would become a foundation of Baroque art. Elsheimer’s physical legacy is only 30 paintings. However, his artistic legacy stretches for centuries. Elsheimer’s history and career are examples of quality over quantity.

In the last year of his life, 1609, Adam Elsheimer painted his most famous piece, Flight into Egypt. It is considered his masterpiece as it is a culmination of his lifetime of painterly experience and technique. It was so greatly praised that even Peter Paul Rubens admired the work and was known to applaud Elsheimer’s overall virtuosity. Flight into Egypt is a small painting. It measures 1 ft x 1 ft 4 ⅓ in (30.6 cm x 41.5 cm) and is fashioned from oil paint on a copper plate. The copper base adds a shining luminosity to the paint. It especially enhances the illuminated elements such as the moon, the moon’s reflection, the hand torch, and the sparking bonfire.

The painting is a Biblical scene from the Book of Matthew. It depicts the Holy Family’s journey to Egypt after being told to flee King Herod’s persecution. The scene is at night with a full moon low on the horizon. The Holy Family is in the central foreground and dominates the composition. They are close to the viewer and therefore engage the viewer’s participation in their space and action.

Mary is riding a donkey while shrouded in blue cloth and holding the infant Jesus. Joseph is in red and walks alongside, with his right hand giving the child a stick to play, and with his left hand holding a burning torch. Joseph’s torch casts shadows upon Mary’s back and the items strapped to the donkey. These shadows really give a sense of depth and form to the Holy Family. It is a classic example of tenebrism from the Italian word tenebroso, meaning “shadowy” manner.

To the right and behind the Holy Family is the illuminated moon. It is brimming with form and light. It sits low to the treeline and casts a reflection upon the lake below. It is the only natural light source within the painting. All the other light sources are artificially manmade. The moon’s light shines within the surrounding clouds and adds further depth and interest to the otherwise flat sky of dark blue and pinprick stars.

The vibrancy of the sky’s stars emphasizes the rural setting. It is widely known that urban centers, even in antiquity, are prone to light pollution. The concentration of human-created light pollutes the nighttime sky and blankets the appearance of stars. Anyone who has ever camped in a very rural or remote location knows the intensity of the star-filled night sky. It has unparalleled beauty with a sparkling presence. In the clearest, unpolluted sky, the Milky Way Galaxy can be clearly viewed. The galaxy’s prominence in Flight into Egypt from the upper left corner to the center boosts the impression of a rural setting. Flight into Egypt captures the dark, isolated, distant experience of a family heading deep into an unknown and foreign land. It is almost scary with its fears of the approaching unknown.

While the celestial elements of the moon and galaxy give a sense of background depth, the earthly elements of trees, animals and shepherds give a sense of midground and foreground proximity. The reduced height of these elements compared to the Holy Family imply their placement is farther from the viewer. It is an artistic and scientific observation that objects receding from view appear to diminish in size and seem smaller. This observation is known as linear perspective. The shepherds and livestock in Flight into Egypt add a sense of destination and travel to the approaching Holy Family.  The placement of the bonfire shadows also adds a visual path to the fleeing household.

What makes Flight into Egypt such an exceptional painting are the two founding concepts it introduced to Western art. First, it is one of the earliest major paintings to depict a Biblical scene outside at night. Previous to Adam Elsheimer, Biblical scenes were frequently depicted in the day, or if at night within the confines of an interior space. Never was a Biblical scene painted outside in the middle of the night. The second element is the depiction of the moon and fires as obvious light sources.  It was Flight into Egypt that popularized the idea of showing light sources within the frame of the painting. Previously, light was cast upon figures from unseen sources outside the frame. Moonlight and firelight may highlight a figure, but the moon and fire were not actually shown. Flight into Egypt clearly shows its light sources as the moon, stars, and fires. Each highlights its own circle of illumination, and each casts its own shadows. It is only through intense contrast that we can value the different scales of shadows.  You must have pure white as a contrast to appreciate the pure black within the scene.

The painting laid down the compositional ideas that would become commonplace within European Baroque art. These foundations are Naturalism, rendering unidealized natural subjects through observation; Chiaroscuro, employing strong contrasts between light and dark; and Emotionalism, evoking emotions through its figures and landscapes. Through its progressive and evolving ideas, the image straddles the closing of Mannerism and the opening of Baroque.

Many people have asked why did the talented Adam Elsheimer only paint 30 images in his lifetime? Three theories answer these questions. First, Adam Elsheimer only lived to 32 years old. If he started painting at approximately 15, he therefore only had a good 17 years to paint. Put this way, 30 images in 17 years is not a poor level of production. His life was simply cut short.

Secondly, the copper panel technique is extremely expensive. Copper was and still is an expensive metal. Hence obtaining copper panels to paint would be an expensive cost to cover. Therefore, limiting his production if he was strapped for cash.

Thirdly, Adam Elsheimer had a reputation for being lazy. Peter Paul Rubens commented on his contemporary’s lack of ambition and his preference for partying over working. Adam Elsheimer supposedly had a great sense of joie de vivre, an exuberant enjoyment of life. Unlike Rubens, Elsheimer was not primarily focused on his artistic career. However, perspective and judgment are dependent on the commentator. A workaholic like Rubens will naturally think a life-work balance is laziness. Perhaps Adam Elsheimer was unfairly judged as lazy by Rubens and other contemporaries because he was not an overzealous worker like them?

Whichever theory you accept, the fact is Adam Elsheimer produced very little compared to his contemporaries. Elsheimer’s images, however, are examples of quality over quantity. Is it not better to produce 30 excellent images than 60 good images, or 90 poor images? There is no doubt that Flight into Egypt is a masterpiece of the highest quality. It is a small jewel perched on the finest setting. It is splendid, sparkling, and sensational.