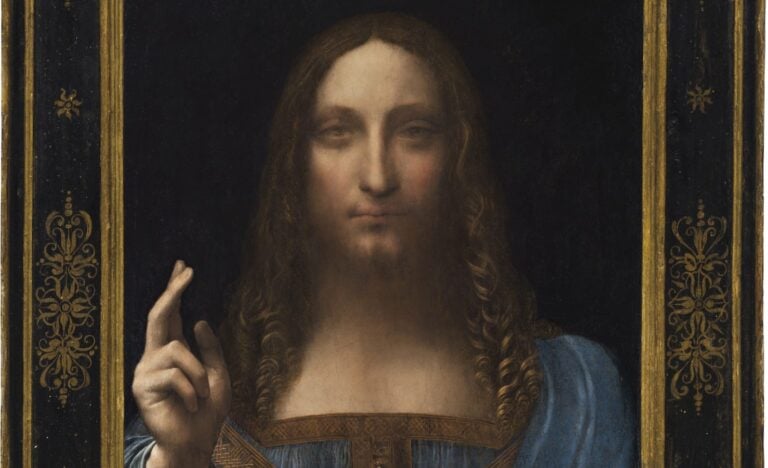 Salvator Mundi by Leonardo da Vinci – was on everyone’s lips when it went on the market.

Christie’s announced this week that will be sold on auction on November 15th and before that will be on tour in Christie’s  locations in New York, Hong Kong, San Francisco and London. Before it was owned by Dmitry Rybolovlev, Russian businessman, investor, and philanthropist for allegedly inflated prices. Now the painting comes back to the market with a $100m estimate – that’s $25 m less than for what Rybolovlev claimed has bought it before. But it doesn’t matter for us, real art history lovers. What we are interested in, is the painting as it is.

Salvator Mundi is a painting of Christ as Salvator Mundi (Savior of the World) – only recently attributed to Leonardo da Vinci, who is known to have painted the subject for Louis XII of France between 1506 and 1513. It was lost and later rediscovered, and restored and exhibited in 2011. The painting shows Christ, in Renaissance dress, giving a benediction with his raised right hand and crossed fingers while holding a crystal sphere in his left hand.  It seems to be one of fewer than 20 surviving paintings accepted as from the artist’s own hand

After Louis XII the recently authenticated work was once owned by Charles I of England and recorded in his art collection in 1649 before being auctioned by the son of the Duke of Buckingham and Normanby in 1763. It next appeared in 1900, when it was purchased by a British collector, Francis Cook, 1st Viscount of Monserrate. The painting was damaged from previous restoration attempts, and its authorship unclear. Cook’s descendants sold it at auction in 1958 for £45.

In 2005, the painting was acquired by a consortium of art dealers that included Robert Simon, a specialist in Old Masters. It was heavily overpainted so that it looked like a copy, and was described as “a wreck, dark and gloomy”.It was then restored and authenticated as a painting by Leonardo. It was exhibited by London’s National Gallery during the Leonardo da Vinci: Painter at the Court of Milan from November 2011 to February 2012. In 2013, the painting was sold to Rybolovlev.

The painting was compared with, and found superior to, 20 other versions of the Salvator Mundi. There are several features in the painting which have led to the positive attribution: There are a number of pentimenti evident, and the unusual technique of pressing down the side of a palm into the paint is typical of many Leonardo works.The way the ringlets of hair and the knotwork across the stole have been handled are also seen as indicative of Leonardo’s style. Furthermore, the pigments and the walnut panel upon which the work was executed are consistent with other Leonardo paintings.