Painting of the Week: Cornelia, Mother of the Gracchi by Angelica Kauffman 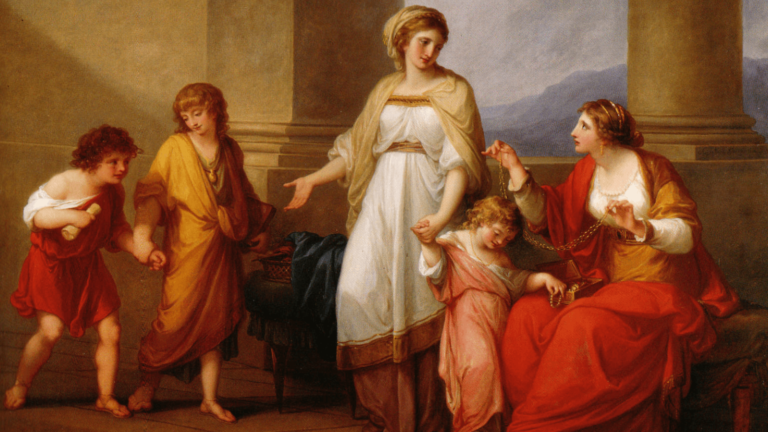 Cornelia, Mother of the Gracchi by Angelica Kauffman shows a pretty Roman woman and her three children. But it's much more than that. It has an important message: family is everything.

The subject of Cornelia, Mother of the Gracchi was a real historical woman. Cornelia Africana was something of a Roman hero celebrated for her dedication to her family. She became widowed, but instead of getting re-married (though history tells us she had plenty of opportunity), she chose to focus on raising her three surviving children. It seems that this was a good choice. Her sons, Tiberius and Gaius Semproneus Gracchus ("the Gracchi") grew up to be important social reformers in the Roman world. It was Cornelia's attention to their education and upbringing that made this all possible. She herself was very learned and intelligent, and she advised her sons throughout their political careers.

Cornelia, Mother of the Gracchi shows Cornelia interacting with another Roman woman, who sits with a box of jewelry in her lap. This woman holds up a necklace and looks at Cornelia, as though asking what she thinks. In reply, Cornelia simply gestures towards her young sons on her right. She values her children over wealth and jewels. That's why, this painting is sometimes called Cornelia Presenting Her Children as Her Treasures. Cornelia's small daughter, Sempronia, doesn't seem to have learned this important lesson yet. She is clearly fascinated by the shiny treasures in the woman's lap.

Like Cornelia, Angelica Kauffman (1741-1807) was a highly capable woman. She was born in Switzerland to a talented family, learned painting from her father, and became hugely successful. In fact, she (along with a fellow female artist) became the first woman to gain admission into the British Royal Academy. Kauffman was a history painter, though she also did many portraits. Her works are strongly Neo-Classical in both subject and style, but they have an appealing touch of softness and elegance not typically found in that style. Kauffman was fond of painting scenes from classical mythology and portraits of herself or other sitters as classical figures. In fact, he has been observed that Cornelia's face in this painting looks similar to Kauffman's self portraits. Both Angelica Kauffman and Cornelia Africana lived long lives and gained immense respect from male and female peers alike in eras where this was an uncommon achievement.