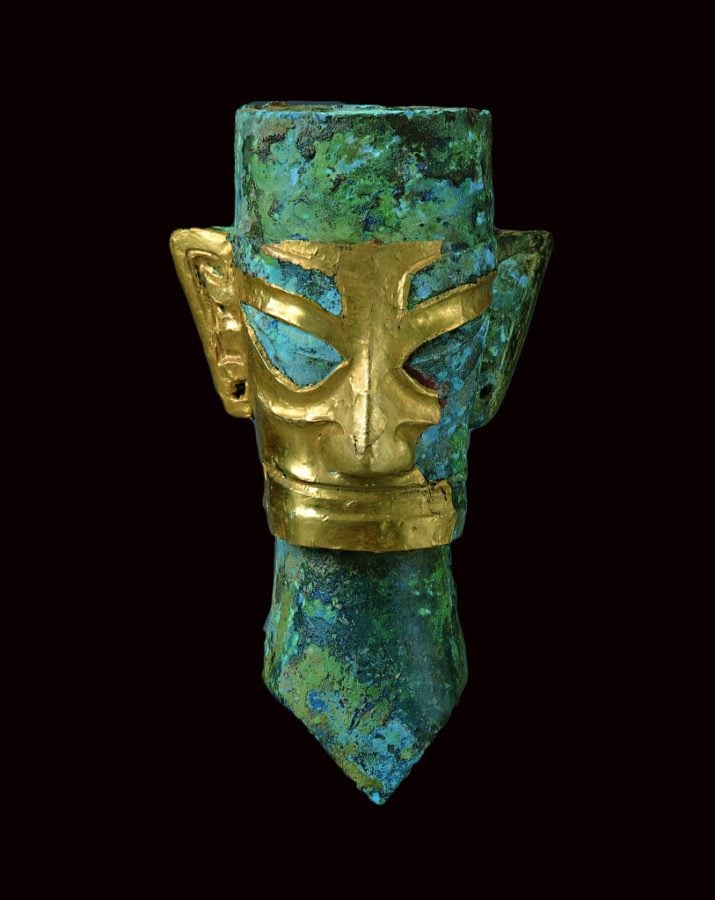 Who doesn’t love a mystery? Especially an art history mystery. Made by a previously unknown Chinese kingdom, the 3,000 year old bronze Sanxingdui masks are shrouded in many unanswered questions and continue to intrigue and puzzle decades after their discovery.

I had never even heard of or seen these masks until I was watching Civilizations, a BBC art history program released in 2018. They were so enigmatic and unusual. I was surprised to find out that they are from China’s Bronze Age. At first glance I assumed they were Native or South American.

In 1926 in Sanxingdui (China’s Sichuan province), a farmer found a few jade and stone artifacts dating to the 12th century BCE. It wasn’t until 1986 that the monumental find of two sacrificial pits filled with hundreds of deliberately and ritually broken or burned jade, bronze and ivory pieces were found. The artifacts were determined to be from a previously unknown Bronze Age civilization, the Shu. They existed from approximately 1250 – 1100 BCE, then suddenly disappeared. Nearby landslides and geological shifts suggest an earthquake might be the most logical explanation for their vanishing. Adding to the mystery is the absence of any human remains or materials. Also there are no texts or historical records at the site or at any neighboring locations or villages.

The finds in the pits generated shock, excitement, and showcased the extent of the incredible bronze work of the Shu. The variety of items include almost 100 tusks, jade and ceramic pieces, bronze masks, snakes, birds, trees, and ceremonial knives. Yet the reason they were left there broken and burned is still unknown.

Sanxingdui means “three star mounds”. The site has three earth mounds, which according to legend, were created when the heavenly emperor cast handfuls of earth on the land. Archaeologists determined that the mounds are the remains of the wall of another ancient city which was built over with earth.

The bronze work is expertly crafted, and the first time this type is seen in ancient China. There is no precedent or reference. The craftsmanship is normally associated with Greek and Egyptian art, so it was a revolutionary find.

The rock star finds are the masks. Masks were rare in ancient China. Also the soldering and gilding of masks was unheard of before this find. They vary in size from life size to the size of a small car. With almond eyes, protruding eyeballs and ears, their strange and unusual appearance has been called alien, bizarre, and weird. Speculation is that they are depictions of rulers, shamans, or participants in religious worship. Their appearance is part animal or representing supernatural beings.

So fabulous and strange, the bronze Sanxingdui masks have no names and no markings. We don’t know who made them or why. Every source I went through marveled at the mystery and lack of information or background available on the artifacts. It’s fascinating that in this age of information and all that we have in our libraries and online, that these kinds of mysteries still exist. These silent masks speak to us and show how much there still is to learn and to discover.

If you enjoyed reading about the Sanxingdui masks, you will also like other art history mysteries:

The Mystery Of Mantegna Tarocchi

The Mystery Of Durer’s Magic Square