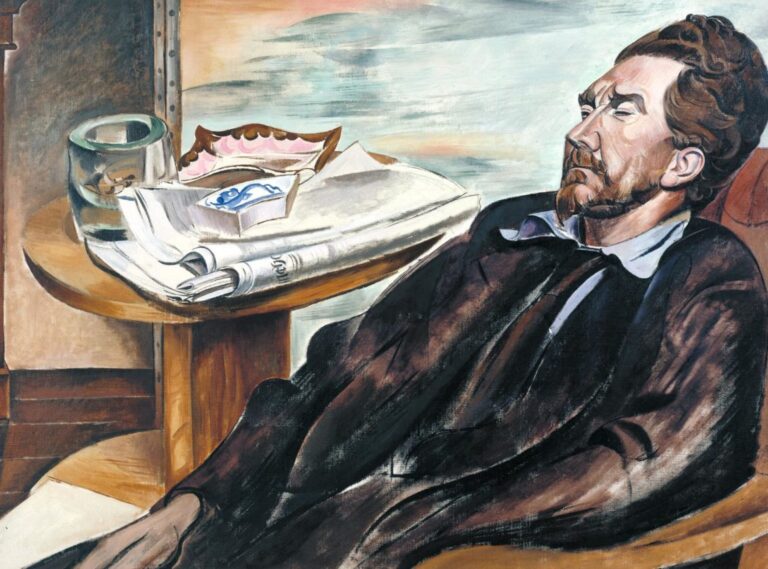 Wyndham Lewis was a man who had ambitions to be great in art and literature. As a writer, he was widely attacked because of his extreme social and political views but as an artist, he was considered by Walter Sickert to be the greatest portraitist of the time.

The purpose of a portrait

Lewis declared to have no interest in proving his sitters’ psyches because for him the real purpose of a portrait was not to reveal the character but to project a public image of a person. Stylistically, the majority of his works are as cold and calculated and with a pinch of serene Mannerist elegance as Bronzino’s portraits. There is no warmth in his paintings and some of them give us the impression that Lewis was caricaturing his sitters by exaggerating the quirks in their appearance. Nonetheless, Lewis always tells us a lot about the people who sat in front of him.

It’s important to know that Lewis was at the centre of the experimental art environment which flourished in Britain from the Edwardian period onwards, starting with the Camden Town Group as he participated in their exhibitions in 1911, continuing with Roger Fry’s Omega Workshops in 1913, and eventually founding the Rebel Art Centre in 1914 (what was to become the Bloomsbury Group later), when he fell out with Fry.

The Rebel Art Centre gave birth to Vorticism, where Lewis was a leading figure. This avant-garde movement was short-lived but it genuinely blended Cubism and Futurism introducing into British art the semi-abstract, impersonal forms and harsh mechanistic imagery.

Yet when Lewis mounted the first and only Vorticist exhibition entitled ‘Tyros and Portraits’ at the Leicester Galleries in 1921, he gained little commercial success.

In his famous self-portrait Mr Wyndham Lewis as a Tyro (1920-21), the artist portrayed himself with a contort expression, curling his upper lip to expose his teeth, while his eyes have a suspicious look. The face is made of flat planes and sharp angles and the sour orangey-yellow background highlights this acerbic vision of himself. It is interesting and fascinating to compare this painting with a pencil drawing from 1930, Self-Portrait with Hat, and see how vulnerable this unprepossessing man, a well known Nazi sympathiser, could feel to represent himself.

Since his painting did not pay, Wyndham Lewis turned to writing in the 1920s but he did not lose the interest in portraiture and inspired by the work of the avant-garde authors whom he frequented like James Joyce, Ezra Pound, T.S. Eliot., he produced more paintings. This is the reason why apart from the self-portraits, his best works are portraits of writers.

In 1925 Lewis made a study in pencil of T.S. Eliot, but it wasn’t until 1938 that it was worked into a highly complex oil portrait. In this portrait, Lewis suggests something troubled and unstable in Eliot who is wearing a suit and tie, folds his hands primly on his lap and sits with hunched shoulders and worried eyes. The shadow behind his head and the writhing abstract forms on both sides of the chair reinforce the atmosphere of disquiet. This masterpiece was submitted to the Royal Academy of Arts as a test: Lewis wanted to prove that the Royal Academy was only a group of small-time businessmen who have no real interest in the development of art. Obviously, they rejected the portrait.

An elaborate Ezra Pound oil portrait from 1939, in which the poet sits back in a chair with his eyes closed, as though asleep or in a world of his own, was bought by the Tate Gallery. On the other hand, James Joyce, who benefited from several fine studies on paper, did not enjoy the same privilege as Ezra Pound and T.S. Eliot.

In a pencil portrait of Rebecca West, Lewis shows the face from two slightly different points of view which capture anxiety and intensity better than photography. After seeing this remarkable work in 1939, Walter Sickert sent Lewis a telegram telling him that he was the greatest portraitist of this or any other time.

Wyndham Lewis did not limit himself to portraying avant-garde figures. He made several images of women, friends from society and the literary world as Roman Catholic author G.K. Chesterton, Naomi Mitchison and a delicate sketch of a boyish Nancy Cunard, but above all of his wife ‘Froanna’. Two oils from 1937, both in a dominant red hue, which art experts believe may be attributable to the beginning of the decline of his vision due to damage to his optic nerves. He died almost a blind man twenty years later.

As his eyesight began to fail in the forties, the pictures became ever more dreadful, so the quality of his work varies wildly. If the works on show teach us something, it is that he was a far more complex and interesting man than his surviving image as a crass Fascist suggests.

His art makes us wonder whether he reserves a modernist style for avant-garde poets, reverting to a more naturalistic style when portraying his wife and patrons.