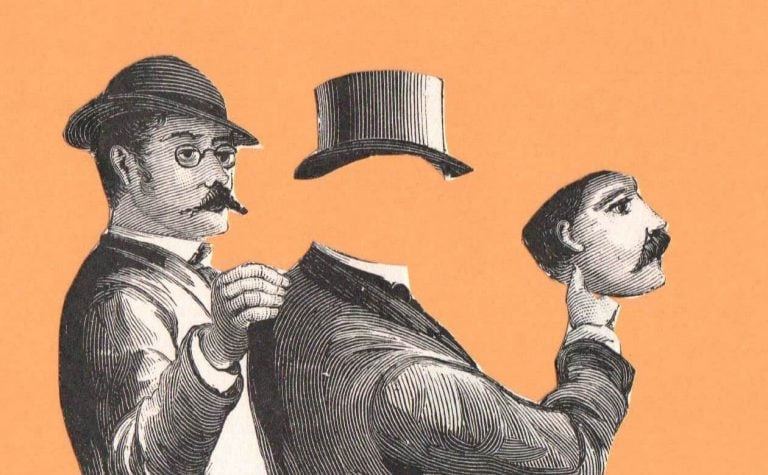 Miyatake Gaikotsu and his Puzzling Postcards

Wisława Szymborska (1923-2012) was a Nobel Prize-winning Polish poet, but she was also an occasional artist. Her main medium was quirky cut-and-paste postcards (in Polish wyklejanki) that she would create once a year and send to family and friends.

Wisława Szymborska’s cut-and-paste postcards are simple but imaginative collages made from a few different images pasted onto postcard-sized pieces of thick paper. The images, which sometimes include words in Polish, mainly come from vintage newspapers and magazines. Many of her collages are funny and ironic, like a woman playing tennis with a man’s tiny head as a tennis ball.

She combined images of differing sizes, color schemes, and styles, such as an oversized human mouth pasted onto a picture of a cat. Some of Szymborska’s cut-and-paste postcards use images from works of art. For example, one collage shows the princess from Velázquez’s Las Meninas in a grassy field with sheep. Sometimes, the message seems quite clear, but more often, the postcards express a strong but unidentifiable irony.

Szymborska started making her cut-and-paste postcards in the late 1960s. She claimed that her motivation was a simple fact that she couldn’t find any nice postcards to buy, but this seems unlikely. On the contrary, she must have spent a lot of time and effort creating the perfect design for each of her intended recipients. Only select people – those she believed would really appreciate them – received Szymborska’s postcards in the mail.

Many have linked themes in Wisława Szymborska’s cut-and-paste postcards with those appearing in her poems and highlighted how some of her texts are similar to collages. There’s a strong element of kitsch to her postcards, and it has also been suggested that Szymborska turned to postcards to express ideas that didn’t easily fit with the more serious poetry that she was admired and known for.

Szymborska’s cut-and-paste postcards have been used as cover images for published books of her poems. Additionally, they have recently attracted interest separate from her poetry, particularly since her death in 2012. The Museum of Contemporary Art in Krakow (MOCAK) held an exhibition of them in 2019. Along with the exhibition, a bilingual exhibition catalog in Polish and English includes essays, interviews, and a selection of the postcards.

To learn more about the poet and artist, visit The Wislawa Szymborska Foundation online. Many thanks to the Foundation and MOCAK for their assistance on this article.